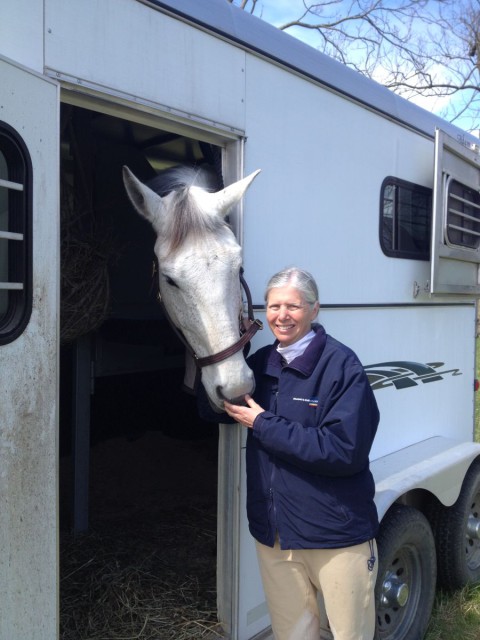 As a child I grew up foxhunting. And I still foxhunt. I love it. It was what we did as a family, every weekend. I always wanted to show but my parents were not interested in that and so we fox hunted. I never had formal riding lessons; my mother told me to sit up, put my heels down and grab the mane. And off we went

So when I had children of my own, I was determined that they would have the opportunity to have lessons and to show. My daughter Carroll took up eventing and we (note the “we,” not just “she”) did Pony Club.

I became one of those long-suffering parents who are grooms, trailer drivers, shoulders to cry on, cheerleaders and rally volunteers. I have been to every sort of Pony Club rally there is. I have ridden every jump with Carroll and was nervous at all her ratings. Carroll became a “B” Pony Club graduate and evented up to the two-star level.

We went all over the place — to Bromont, down to Florida and to many of the events in between. I loved every minute of it. I have literally watched hundreds of lessons but to this day, I cannot tell if a rider is on the correct diagonal. We don’t do diagonals foxhunting.

So now it is my turn to follow my dream. I have been fortunate enough to be able to retire at the young age of 61. And I am fortunate enough to be able to have horses and to continue to foxhunt. But as I approached retirement, I decided that maybe I would try eventing. I wanted to take lessons to become a better rider, to prolong my foxhunting days, and really secretly to follow my childhood dream and finally go to a show. Despite having watched those hundreds of lessons, I had no idea it would be as hard as it is.

The first challenge was to find a horse. The main criteria was that the horse needed to be a good, reliable foxhunter as well as a lower-level eventer. I had almost given up and decided I would just foxhunt when Terri Impson, my daughter’s trainer, sent a text to Carroll saying we had to look at this horse advertised on Sport Horse Nation. She insisted that we needed to get in the car right away and go see this horse. He was perfect!

So Carroll made some inquiries, and the next thing I know my daughter is taking me to see a horse. Now isn’t that a role reversal?! And not only are we going to see this horse but we will be trying it at Chesterland in Pennsylvania, the farm of the one and only Bruce Davidson.

I really don’t like trying horses. Remember, I don’t even know my diagonals. I have jumped plenty of jumps out foxhunting and galloped down plenty of hills. But riding in a ring — never done it! Carroll assured me she would ride the horse. So we drive up to Chesterland and meet the horse’s owner, Laura Fazio, who could not be nicer. And out comes Howie (his registered name is Young Lad).

How is a gray horse, half thoroughbred and half draft. Let’s just say he is a big horse — the draft definitely shows through. My first thoughts were that I really didn’t want a gray, and I wondered if he could keep up first flight foxhunting. So we watched the horse go, and Carroll got on him.

Then Laura says to me, “Oh look, here comes Bruce!” I nearly died! Here I was going to have to get on this horse in front of all these people, including Bruce Davidson. So I blurted out that they needed to forgive me, because I really don’t know my diagonals and have never ridden in a ring. Bruce assured me that did not matter.

So I got on the horse. I rode very badly around the ring and jumped a few small jumps. All the time, Carroll was encouraging me: “Mom, you look great.” Another role reversal. And then I saw the logs. There were these three logs lined up in succession and I thought to myself, I can jump those, I do that all the time out foxhunting. So I jumped the logs. Howie was great. 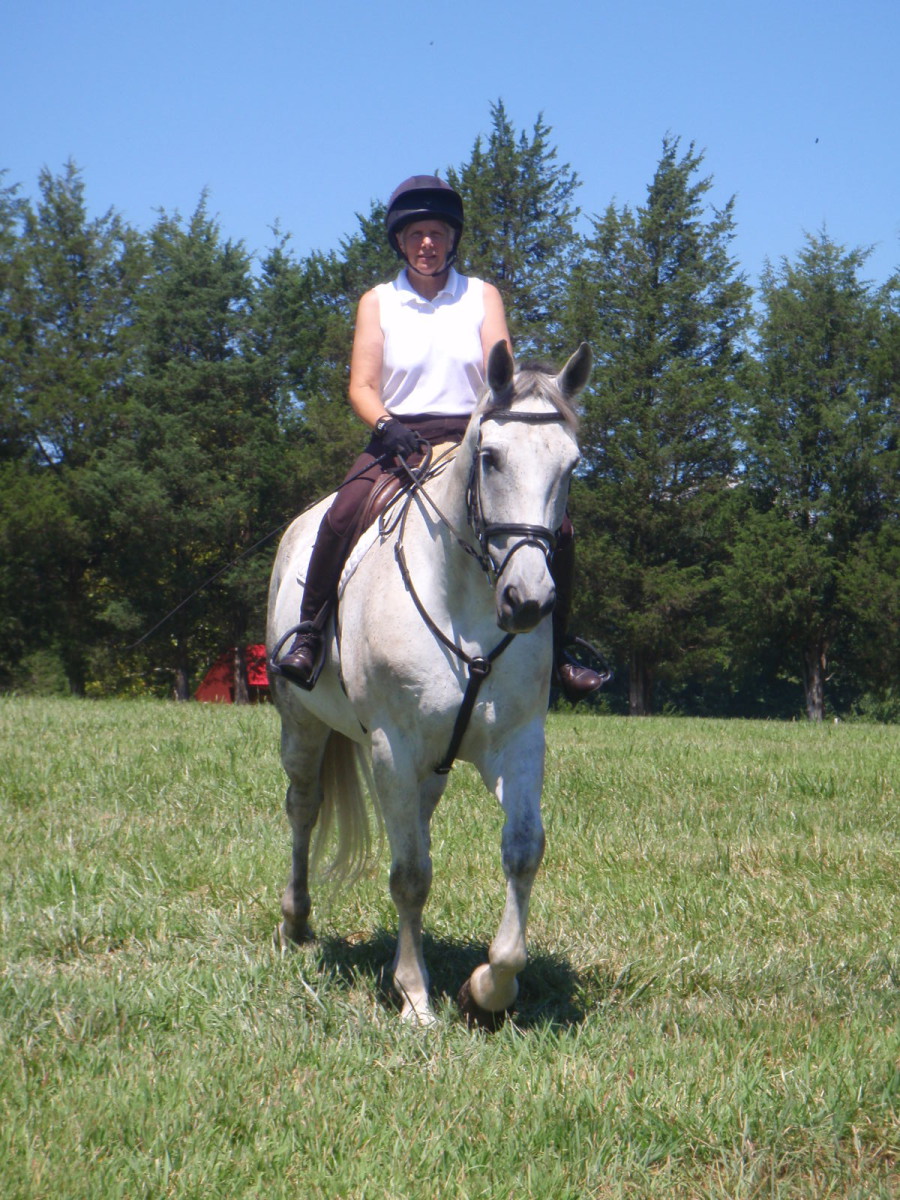 On the way to jumping the logs, I had seen a log jump in the fence line. So I asked if I could jump that. Bruce enthusiastically said “Absolutely, go for it!” So I put Howie into a canter and headed for the jump. I am sitting back, shoulders up and putting on my best Marilyn Little impersonation. Howie takes me right to it and flies up in the air. As I am sailing over this jump, I hear this very loud “yes!” coming from Mr. Davidson himself! I had to smile.

Bruce then excitedly calls out to me to come take these other logs. Upon landing he comes hobbling over (he was recovering from an injury) laughing and says “Kem, you know you just jumped the LOGS OF DEATH!” Carroll is close behind and says, “Mom, you just jumped four feet.” I protested but she insisted that the logs were as high as the fence which indeed they were. So, needless to say, I had found my horse!

Howie came to Virginia. We outfitted him in tack and I got a jump saddle to ride eventing.

So next I needed to find a coach. As it turns out, Leslie Chelstrom had married John Lamb and moved to our area. How could I be so lucky! I called up Leslie and explained my situation — that I am an older woman who has ridden all her life but never had a formal lesson. So I have lots of bad habits. But the silver lining was that I had an experienced horse. I heard Leslie chuckle over the phone but she agreed that Howie and I could come for a lesson. And to say she has been wonderful is an understatement. She has been so supportive and patient. Ditto for Howie — he is a saint!

So Howie and I have gone for weekly lessons for the past year. I also had a great season foxhunting on Howie and on another of our trusty foxhunters. The dressage has been so much harder than I ever envisioned. I am making slow progress but I am determined not to give up.

In April my dream came true and I competed in the Novice division at CDCTA in Berryville, Virginia. And I have since competed at Middleburg.

I complain every time about having to pull Howie’s mane and then train it to go on the right. It naturally goes on the left and for the life of me I can’t understand why it matters whether it is braided on the right or left. But I am told it does. Carroll, bless her heart, has braided Howie for both of my events. She has been my biggest cheerleader and despite being in law school insists that she has to be there to support me. 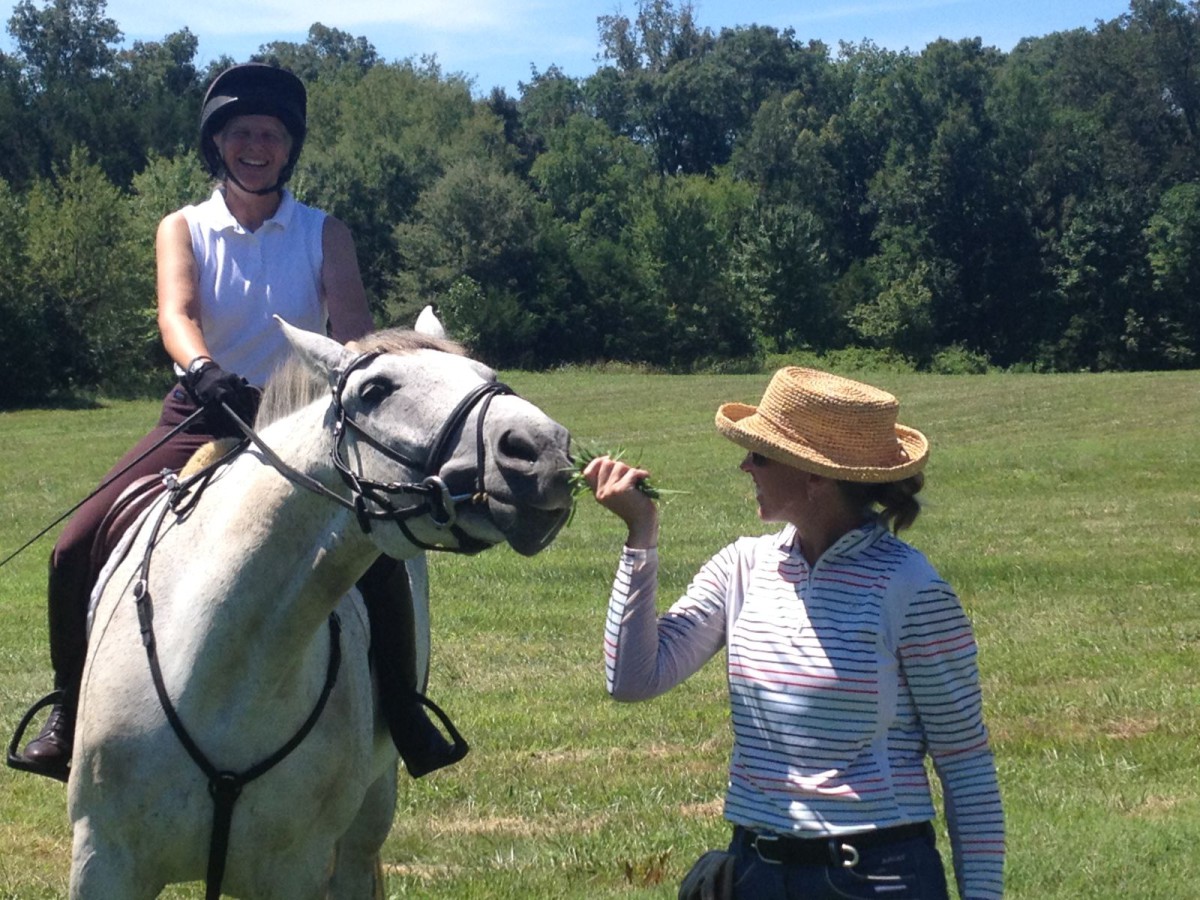 The show jumping warmup is definitely my biggest challenge. So many galloping around and calling out jumps — I need to learn to be a little more aggressive. But we have done OK in the ring: one rail at CDCTA and clear at Middleburg.

We were double clear on cross country at CDCTA but I have to admit we went a little fast. I had to circle Howie twice and sent some photographers scurrying. A bitting change at Middleburg fixed that but I reverted back to leaning forward too soon and had a run out cross country. Howie is making sure that I ride and don’t just sit there! Dressage is a work in progress.

I am having fun. I know that I am a lot better rider than I was a year ago. I feel much safer out foxhunting. I am fitter than I have ever been, and feel a lot healthier. Sometimes, I am exhausted. It really is a lot of work. It is also really challenging both physically and mentally. There are so many things to remember, especially at an event. It is much better for the brain than Luminosity. Not to mention that it is a lot more fun.

I have had a few senior moments, and it will be a long time before I can remember to smile in dressage. But I have to say I have never been happier.