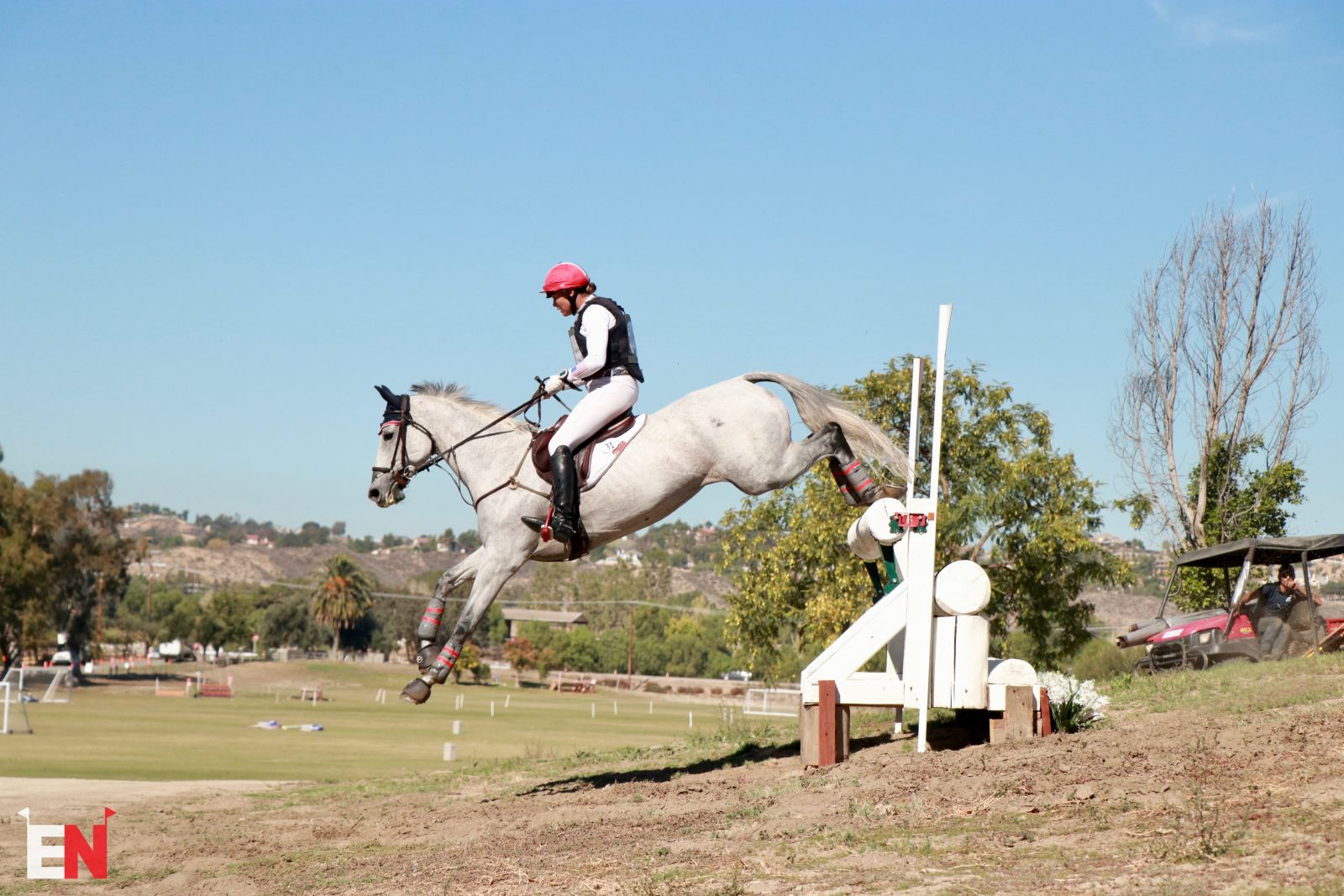 “It’s all about what happens in the moment,” said Clayton Fredericks of how yesterday’s international cross-country tracks could be successfully navigated. There were many moments with many things happening on courses that fulfilled Fredericks’ mandate to build them fully up to the international standard.

Seven of 11 starters finished the CCI4*-L track successfully, with two falls and two eliminations. Even though the West Coast has fewer entries than elsewhere, those in the hunt are seeking World Championship and/or 5* qualifying scores and experience, Clayton noted. As such, it’s not right to make the courses anything less than what they’d face should those ambitions pan out.

Judith McSwain’s Fleeceworks Royal is fully back on form, reported a happy Tamie Smith after finishing the big and technical 4*-L route with only a few time faults. “It was a bit relentless,” she reflected. “You needed a horse that loves her job and is experienced at it.” Tamie has brought the now 12-year-old Holsteiner along since she was 3. Even with a gap in their time together the last 18 months as Tamie went to the Olympics and Europe, their partnership made relatively easy work of efforts that required setting a line and sticking with it and positive approaches to imposing obstacles from start to finish.

In the lead after a 24.9 dressage test, Tamie had some potential mental challenges before setting out with her second ride in the division. She and the promising star Elliot-V had a fall at the angled 4AB Pony Pond, an early challenge Clayton described as a wake-up call for what was ahead. Then, she and Fleeceworks Royal had to hold in the start box when Amber Birtcill and Cinzano took a spill at another difficult angled water obstacle, this one at 9AB. (Amber and Cinzano are OK.)

Their own pass through the Pony Pond was a bit rough, but otherwise Fleeceworks Royal handled everything like the World Championships candidate Tamie considers her to be. The time penalties were right where Tamie expected. “She needs more runs,” the rider explained of not putting pedal fully to metal this time out. “There’s no substitute for competing.” The resulting time faults brought their score to a 30.5, with a rail in hand for show jumping. 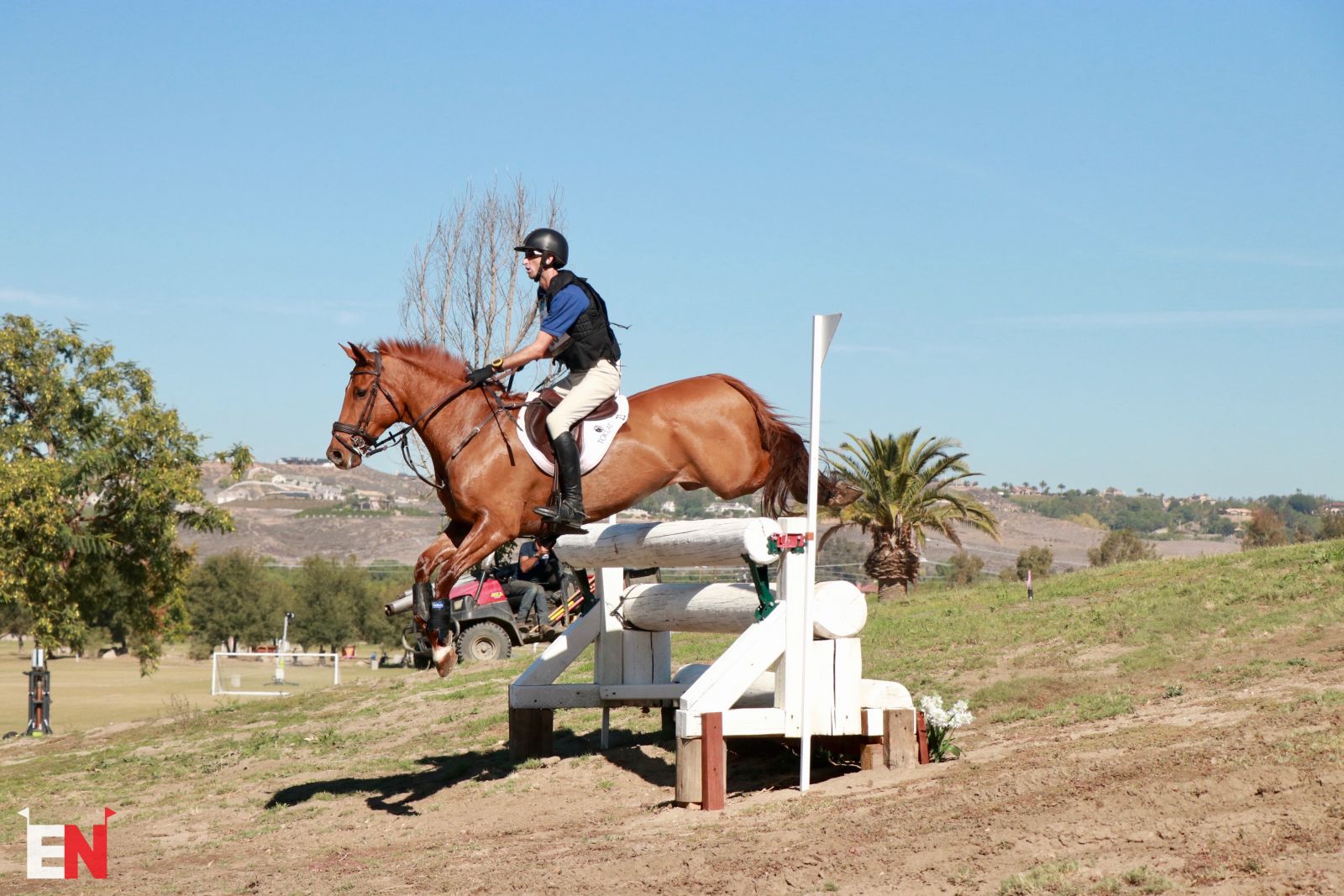 James Alliston and Paper Jam jumped up from 6th to 2nd by picking up only a 2 time penalties on cross-country. Steering can be an issue with the 12-year-old Hanoverian owned by James’ wife Helen Alliston. That added degrees of difficulty to a route with many bending turns, but James appreciated the practice and Paper Jam’s honest nature. “If I can line him up right, he’s honest and he’s a fast and a good jumper.”

Echoing comments of his fellow riders, James described the course as tough to the very last. In fact, at the 23AB Skinny Hedge and Corner (of 26 obstacles), Paper Jam nicked a flag at the B element, but it was cleared on review for no jumping faults. They go into show jumping on a 35.2.

The 23B element was also a bugaboo for Czechers, James’ second mount in the division. This rising star, another of James’ many chestnuts, had an uncharacteristic run-out.

Alexandra MacLeod and Newmarket Jack were the only pair to finish under the course’s 10-minute time limit, helping them move up from 7th to 3rd on their 37 dressage score. The new-to-California rider from the East is thrilled with today’s effort, especially as they’ve attained this level while she earned her veterinary degree. She and Jack are a seven-year partnership that began when she was a working student for Phillip Dutton. Now based in Los Angeles, she appreciated recent fine tuning and a course walk with Tamie Smith.

Alexandra’s only disappointment was assuring her visiting mom that the “courses out here will be softer than what I did at Fair Hill in Maryland. Instead, it was right up to that level!” Alexandra and Newmarket Jack stand 3rd.

Double clears today moved Tamie Smith and James Alliston into one-two standings in this division, too, but there’s less wiggle room than in the 4*-L.

“We weren’t in the market for another horse,” Tamie says of MaiTänzer. “But because of COVID, he happened to be on a bit of deal, so we got him. He’s a bit green, having just done his first CCI3*, and I’m a little rusty on riding him, but he made the course feel easy. He reads the jumps well and he just zips around.”

Alliston Equestrian’s 7-year-old Canadian Sport Horse, Nemesis, has been “part of the family” since he was a yearling, James explains. After winning his first 3* at Rebecca Farm this summer, Nemesis continues to fulfill early promise as the pairs moves up from 9th to 2nd.

It’s close, though. Tamie and MaiTänzer have a 31.9. James and Nemesis have a 32.4, and Audrey Sanborn and OBOS Quality Time added only 2.4 time penalties to be third on a 33.3.

Even after excelling on today’s tough tracks, there’s no big sigh of relief, Tamie explains. “Show jumping is where it’s all won and lost,” she said of her standing in the 4* and 3*s. “I never take anything for granted.” 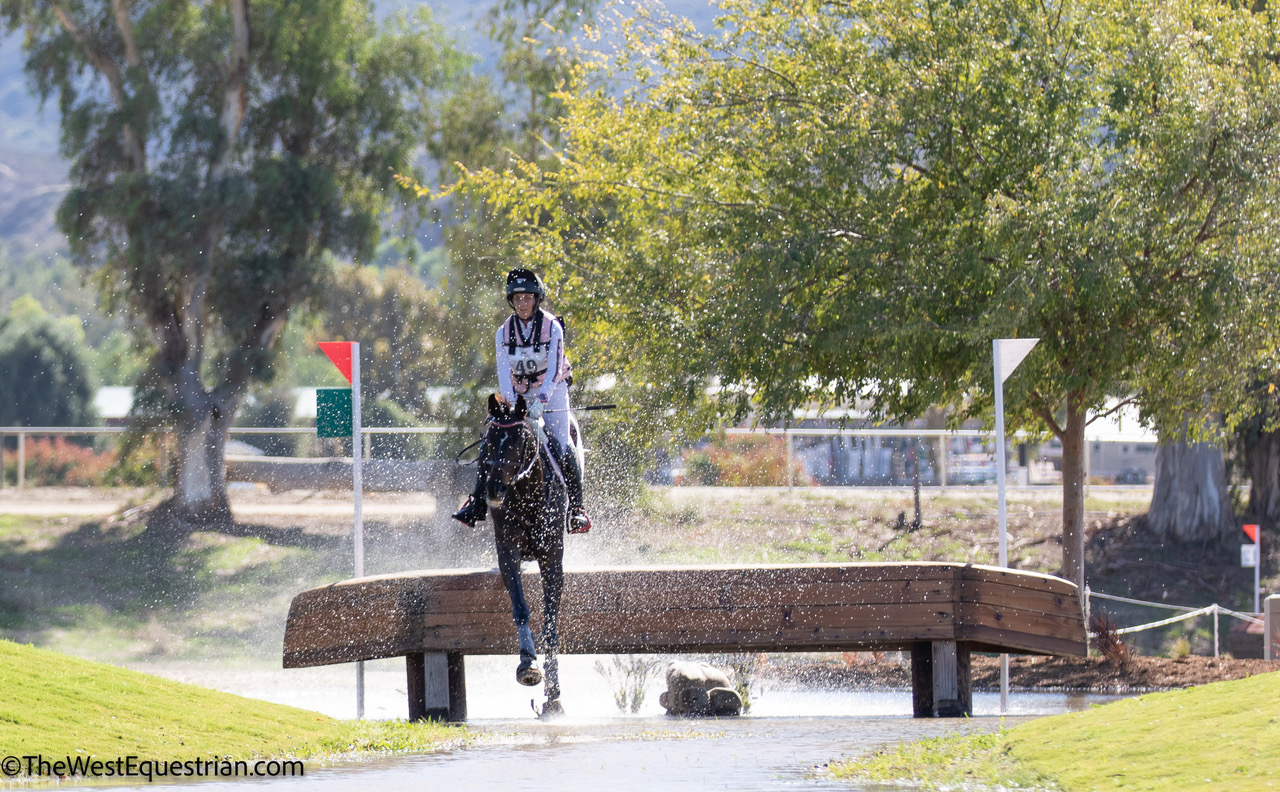 With less than one rail separating the top six contenders, nobody will be taking anything for granted in this division either as they head into the atmospheric Grand Prix ring for show jumping. The top three are the same as after dressage: Professional Taren Hoffos holds the lead with her mother Carolyn Hoffos’ 10-year-old Oldenburg mare Regalla; 16-year-old Rhiannon Gorin and CSF Handsome are second on 26.7 and professional Kaylawna Smith-Cook and AEV Above Authority are third on a 27.

A Rider’s Perspective on Course Design

A 5* competitor himself, Clayton Fredericks said he was happy with how the courses rode and felt they posed the right tests at each level. “I always ask myself, ‘If I was on a horse at this level, would this be fair to me?” Today’s courses were exactly that, he said. “As a course designer, we are always trying to create situations where the horse jumps well and safely.” He was gratified to see riders take a variety of striding and track options in several places — “reacting to what’s happening in the moment.”

What’s Next: After an 8 a.m. trot up, the international divisions conclude tomorrow with jumping in reverse order of their standings. The 2* is at 10:25; the 3* at 12:45; and the 4* at 2:15. Horse Trials and Challenge contenders continue with cross-country and finish with show jumping on Sunday.