Each Thursday we take a trip down memory lane to a favorite EN post from over the years. This week's comes from Kim Bradley, a longtime EN friend and contributor, who wrote about her experience riding an ostrich. Wylie explains why it's one of her favorite EN posts of all time: "Not only is riding an ostrich a secret fantasy of mine, Kim's description is brilliantly hilarious. The first eight paragraphs of this story comparing horses and ostriches ... I can't even." Originally published on Feb. 17, 2011, we think it's as fun a read today as it was back then. Enjoy! 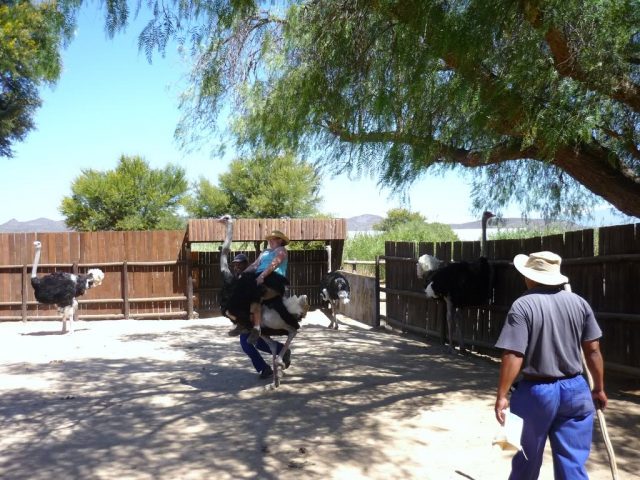 The first thing to know is that riding an ostrich is nothing like riding a horse. But a quick side-by-side comparison, horse vs. ostrich, will show you why they are different.

Look into a horse’s eyes. You might see affection, indifference, loathing, fear–whatever it is, you’ll see something. You’ll sense that somewhere behind those eyes there’s a functioning brain, making decisions that might occasionally be described as rational.

Look into a ostrich’s eyes, and you’ll be able to check your hairdo. That’s about it. Gram for gram I don’t think ostriches’ brains are that much smaller than horses’, but ostriches clearly have a lot less neurons firing.

Look at the horse’s neck. Nice and sturdy, with all that handy mane to grab.

Look at the ostrich’s neck. If you have any doubts about its flimsiness, give it a little push. The neck will coil away from you like a large and hairy snake. Nothing to hang onto there.

Look at the horse’s legs. Four of ’em. One on each corner. Kind of comforting, really.

Ostrich, two legs. Not as good.

In fact, riding an ostrich is remarkably like riding a pencil-necked two-hundred-and-fifty pound chicken. For all that, I was very keen to give it a go.

We were in Oudtshoorn, the ostrich capital of South Africa. Located inland from Mossel Bay near gently rolling mountains, the town was originally settled by–I was surprised at this, too–Latvian Jews. They all speak Afrikaans now. (The drugstore in Oudtshoorn, manned entirely by white people, was also the one place in all of South Africa where I absolutely could not make my English-speaking self understood.) Ostriches were farmed here starting in the late 1800s, because of the demand for ostrich feathers to decorate ladies’ hats. Before World War I and the invention of the automobile, prime ostrich feathers were worth their weight in gold.

Now, however, ostriches are prized for their meat and their skin, which makes a remarkably beautiful (and expensive)leather. The ostrich farms cater to tourists; at ours we began with a lovely meal of ostrich fillet (tastes like beef, not chicken) and red South African wine. We moved on to petting ostriches, admiring paddocks of foot-high baby ostriches, and learning about ostrich development in general. Next our hostess escorted our group to a small paddock, and that’s where the real fun began.

The ostriches aren’t trained to be ridden. There’s no saddle, no reins, no attempt at or semblance of control.

The farm staff turned a half dozen ostriches loose into the paddock, where they milled about randomly the way ostriches do. A staff member grabbed one and threw a cloth bag over its head. Apparently doing that confuses ostriches into temporary docility. The men pushed the bagged ostrich up against the board fence of the paddock, lifted the ostrich’s wings, and told me to climb aboard.

I won’t ride a horse without a helmet, pants, and sturdy leather shoes, but I rode my ostrich in capris and a sun hat.

The ostrich’s body was thinner and smaller than that of my daughter’s small pony. Its feathers were wonderfully soft, and for a moment I worried about crushing them. (The ones on the body aren’t the valuable ones–and anyway, the days of ostrich plumes are long past.) As instructed, I hooked my legs over the ostrich’s knees, which are right up by its body. (Think about the legs on a roast chicken. No, flip it over, legs pointing down. See? I tucked my feet right around the chicken thighs–only on the ostrich, of course.) I grabbed the wing pits. I leaned back.

The man yanked the bag off the ostrich’s head. The ostrich exploded. With only two legs, ostriches can’t buck, which was dead useful. My ostrich skittered instead, ping-ponging back and forth around the small paddock, scattering the other ostriches into a sort of cascading hysteria. It took considerable will to maintain my grip on the wingpits and not fasten my hands around its neck instead. After all, that’s where the mane should be. But I’m pretty sure that strangling the ostrich was not in my best interests just then.

I figure I managed eight seconds, like a bull rider. I didn’t fall off, but I didn’t actually dismount, either. With a lapful of wings, my only real option was to slide straight backward, into the supporting grasp of two of the staff members, who were laughing themselves silly at the screeching white woman on the bird.

It’s hard to call it riding. But I sat on the back of a galloping ostrich, and by golly I had fun.