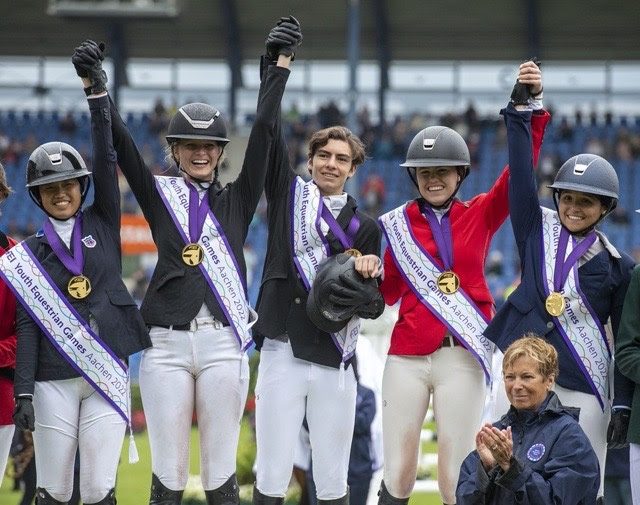 It took a thrilling three-way jump-off to decide the result of the team competition at the FEI Youth Equestrian Games 2022 in Aachen, Germany Thursday afternoon. And it was the North American quintet of Mimi Gochman (USA), Carlos Andres Meany Morataya (GUA), Gabriela Maradiaga (HON), Shannon Grubba (CRC) and Xaviera Maurer Buch (MEX) who clinched gold ahead of Team Europe in silver and Team Africa in bronze.

First to set out in the third and final round, Gochman set the standard when flying through the finish with the lovely grey gelding Merino van de Achterhoek in 32.26 seconds and couldn’t be caught. But the sheer delight on the faces of Great Britain’s Claudia Moore who scooped silver medal spot for Europe and Morocco’s Jad Guerraoui who earned bronze for Africa told the story of this super-exciting youth tournament that will come to a close on Saturday when the individual medals will be decided.

It has already been a wonderful opportunity for young people who would otherwise be unlikely to meet to come together in the most iconic arena in the world of equestrian sport. And the riders, all aged between 15 and 18, have truly risen to the occasion. 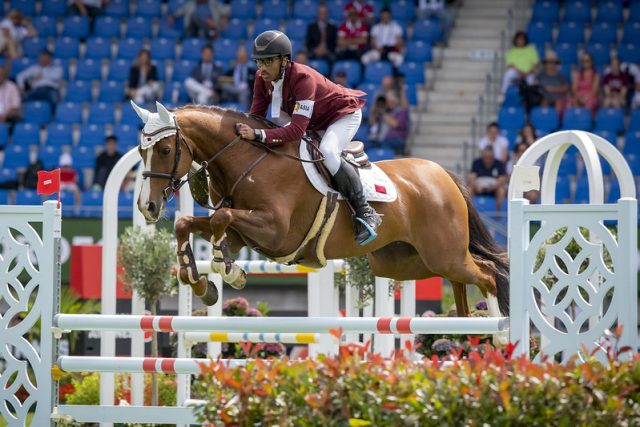 The standard of competition has been phenomenal all week. Divided into six continental teams, the 30 contenders from 30 different countries had only a few days to get to know their borrowed horses before yesterday’s first round in which Africa, Europe, Asia and North America finished on a zero scoreline when the best three results from each group was taken into account.

Despite brilliant double-clears from Qatar’s Saad Ahmed Al Saad (DSP Cessy) and Iran’s Marilya Manavikherad (Cornelia Marie), Team Asia had to count four faults so slipped off the radar along with Australasia who completed with eight and South America who finished up with a total of 20 over the two days.

The Australasian result however belied fantastic performances from Syria’s Aya Hamcho (Campari 329) and New Zealand’s Dylan Bibby (Chasseur Ask Z) who were amongst the 14 riders to post double-clears by the end of the day. 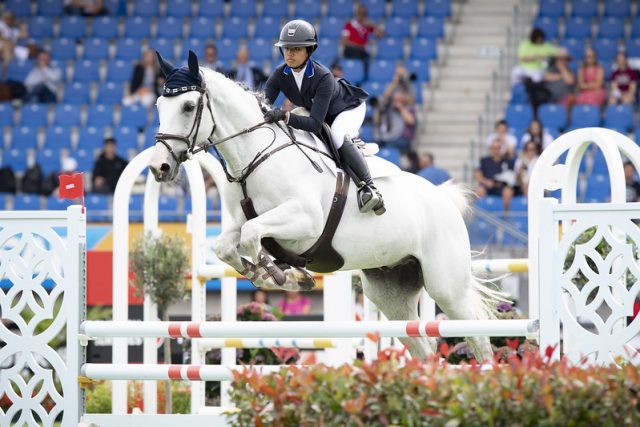 With four more of those coming from the North American team they always looked threatening.

Gochman’s lovely quiet ride with the 12-year-old Darco gelding got them off to the perfect second-day start before Meany Morataya, also clear yesterday, followed suit with the mare Annelie which was formerly competed by German international rider Mario Stevens. Maradiaga (DSP Goldquelle) had a fence down on both days but both Grubba (Volk D’Ermng) and Maurer Buch (Lawita 3) were foot-perfect so, third team into the ring, they already had the podium in their sights. But it was still far from over.

And then Team Africa joined in. Tunisia’s Elyes Chaouachi (Maestro v. Donkhoeve) and Zimbabwe’s Amy Hay (Ypaejae Jeremy) were both clear yesterday but collected eight and four faults apiece in the final on Thursday. But when Egypt’s Haya Osama El Borai (Jadzia), Morocco’s Jad Guerraoui (Lady Angeles) and Thomas van Rijckevorsel (Lucy 781) all racked up double-clears it was game on – a three-way battle for the podium places would have to decide it. 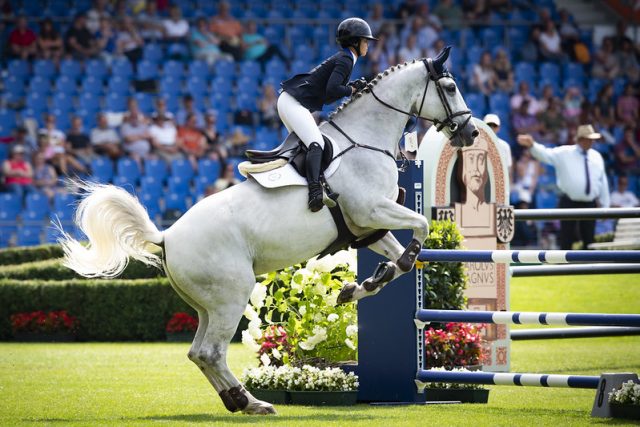 First against the clock, USA’s Gochman put Team North America on the map in 32.26 seconds and Great Britain’s Moore was just 0.33 slower over the new track when next to go for Team Europe. This left all the pressure on Jad Guerraoui whose lively mare, Lady Angeles, cleared the line in 33.33 seconds to take the bronze for Africa.

Britain’s Claudia Moore is a multiple medallist at European Pony and Junior level but she still felt the pressure. “I knew Mimi had an incredible round and I wanted to match that. I kept quite cool, calm and collected and went in and I had so much fun and I had my entire team behind me and I think that was the thing that drove me the most!”, she said. And like all the young riders this week she thoroughly enjoyed competing in the world-famous Soers arena. “The crowd, the atmosphere, the ground, the jumps, it’s such an amazing thing for the youth. Some people in their professional career never get to jump at Aachen and for us to be able to do it at this age, and have this type of experience early on, is amazing!”, she said.

Newly-crowned team gold medallist, Gochman, said, “going first is a bit challenging sometimes but I gave it my all and it paid off! I’m very proud of the way it went!” She talked about creating a bond with the Belgian-bred Merino van de Achterhoek with whom she has clearly struck up a great relationship already. 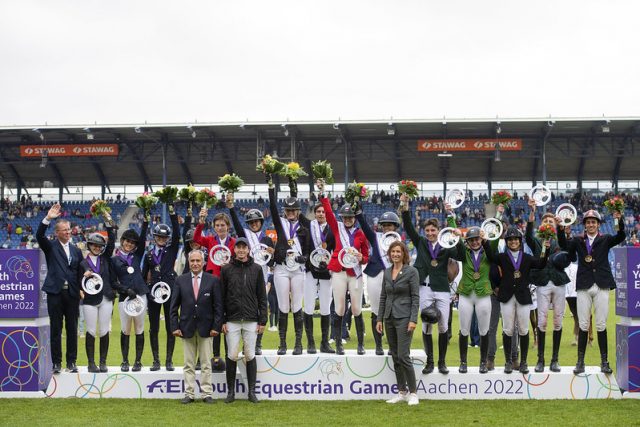 “The first thing I tried to do was not to be too defensive…I don’t know him and he doesn’t know me so of course there’s going to be a little bit of a growth period.

The spirit of these FEI Youth Equestrian Games is infectious and the winning team’s Chef d’Equipe, DiAnn Langer, spoke about the positivity it has already engendered.

“The earlier they start this type of competition – the younger they are the better for our future. It’s about more than just producing a winner, a second and third, it brings the young riders together to meet so many new people and make great friendships”, she said.

So what does she think about Team North America’s chances for more glory in Saturday’s individual medal-decider? “We have our hopes and today Mimi, Claudia and Thomas showed what they are made of, but all the riders on all the teams have the same capabilities. On Saturday the fences will be a bit higher and it’s a whole new competition but one thing is for sure – it’s going to be great sport!”