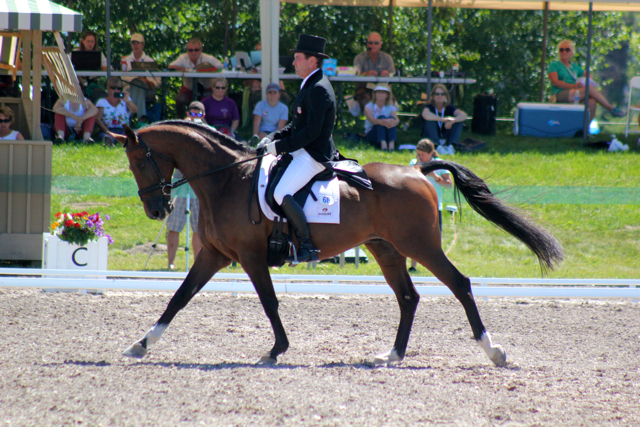 Phillip Dutton riding Team Rebecca’s Ben took a commanding lead of the CIC*** division this afternoon, giving himself an eight point cushion ahead of his closest rival, Kristi Nunnink on R-Star in second place. (CIC3* scores here) With back to back CIC3* wins already this year at Chattahoochee Hills International and Bromont, this combination has put themselves in a great spot to make it three in a row.  Plus they also won the Advanced Division here at Rebecca Farm two years ago so we know Montana suits them.   Although it would be hard to bet against them at this point, Phillip did point out that Ben was off last year with an injury so he’s not planning on going all out for time whilst still conceding that the horse feels terrific in himself, and he would go “quickish!”  Ben’s test was a pleasure to watch – forward and flowing, and mistake free, combined with his extravagant paces.  But, ever the perfectionist, Phillip still felt he’d left some marks on the table,

“I was pleased but you’re always thinking of things you could have done better and I left some points in the ring. We’re starting to trust each other now though – I know when he goes in the ring that he’s got plenty of movement so I don’t have to overdo it, just make it look nice and easy and soft. It’s getting better and better so I’m pretty excited about him.  He’s got a great trot but his canter needs to be underneath him a bit more and after Bromont I realised that and have been putting a fair bit of time into it. I think that part was the biggest improvement, it was quite a bit better today so I’m happy about that. He’s never been this fit in his life so I’ve got a little bit different of a horse to deal with now; he takes a lot more riding in than he used to so I’ve had to adjust my working in with him. I rode him three times today to get him to where he and I were on the same page, but I think that’s a good thing because he’s starting to get really fit which has taken a while.” Although Phillip admitted that an 8 point advantage is a good thing, he stressed that there are still two more days to go and the final score is obviously the most important, but that he’s looking forward to riding Ian’s cross country on Saturday, “I think it’s a great course, it’s quite big and scopey not super technical but there’s a lot of jumping to do. A lot of people have come a long way to get here, including myself, and it’s well worth it, it’s great footing and a great course, Ian has put a lot of thought and detail into each jump and it should be a great experience for the horses and riders.” 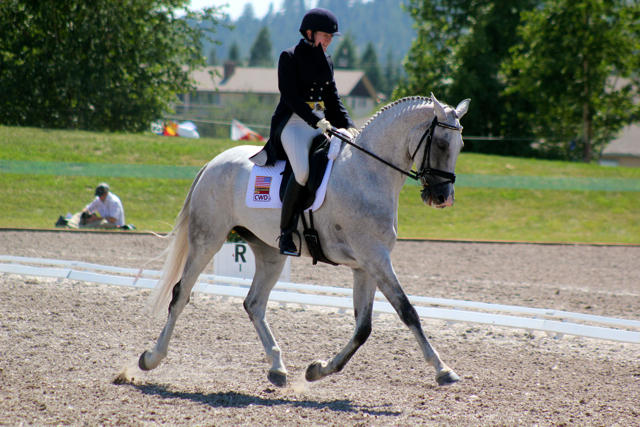 Kristi Nunnink and R-Star produced a lovely test too, with moments of brilliance – their lead changes were flawless – but also a couple of bobbles, breaking into canter in the trot work, and jogging before the rein back.  But Kristi isn’t worried about them, explaining they’re a result of working on the big picture, “It’s been a great day. I was very happy with R-Star; I’m trying to move her back into a snaffle and she went in one today and was very good in it so I was very happy about that. I had a few little bobbles because we’re working on making her more supple and she likes to do little  canter steps to avoid that but she’s getting better and better and I was very happy with her.” 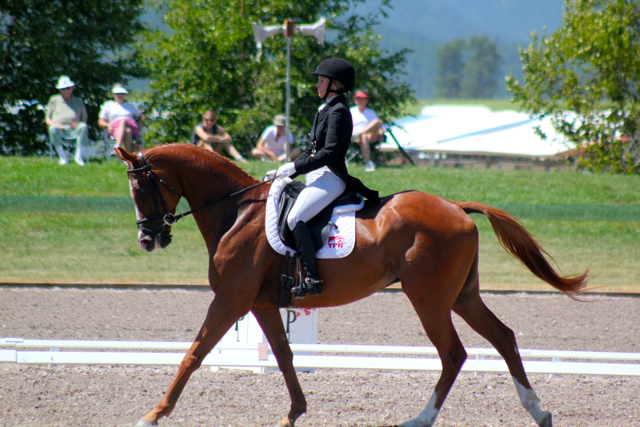 Katie Ruppel made no mistakes on her lovely chestnut OTTB Houdini, with especially nice canter work to slip right behind Kristi into third place on 49.2, “As David told me after my test, and I agree, it’s all basically good but being a nine year old, green, three star horse we really need to just clean up the details and shave the points off, and that’s something we’ll work on in the training sessions next month.  I think we could easily score five or six points lower just by being strict on the details like maybe, cleaner halts, cleaner departs, some straightness….I think working on things like that could really make it a winning test every time but I’m really pleased with him. We had a scary moment in warm-up when he didn’t appreciate the cross country going on nearby and we had an arabian tail moment but he’s really good about going to work in the ring, I’m really proud of him.” Like most of the riders I’ve talked to, Katie is looking forward to the cross country test on Saturday, and has some previous experience with Ian’s courses, “I think it’s a great course but personally I think it’s a little tame for one of Ian’s courses although I do think it’s very appropriate. It’s a good test, there’s lots of galloping, typical Ian, lots of ditches and boldness questions. I really like it, I’m excited to get out there and I think it will suit Houdini really well. Ian designs at Richland which is my hometown so we’ve done that every year, I’ve done the 3* multiple times and Houdini did the Advanced there last year. I went to Galway, which was very impressive, I called it Ditch City, that’s a hard track. I love the way Ian designs; it’s all very jumpable, the questions are hard but they’re fair, and he definitely rewards a bold horse. I think Houdini will go out there and be pretty brave tomorrow.” Lying in 3rd place, and apart from the yawning chasm between Phillip and the rest of the field, only ten points separate the top 15 so I asked Katie if she’d be going for time, “Oh God, yes! It’s not a super long track, he’s fit enough, he’s a thoroughbred, I’m very lucky that he’s got a lot of stamina, the galloping is great, the footing is perfect – why not go for it? For sure!” 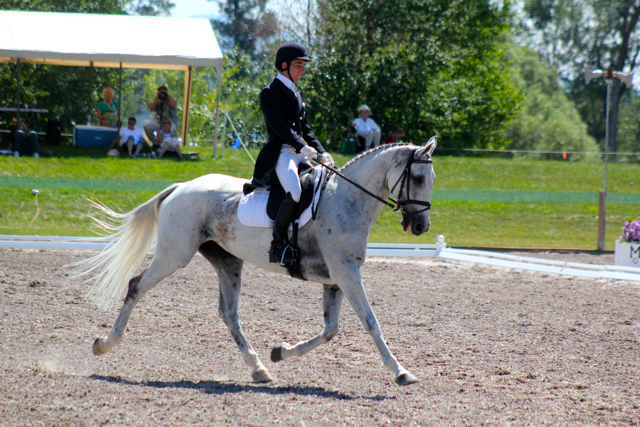 The difference between Zach Brandt’s test today on Cavallino Cocktail and his test at Jersey Fresh in the Spring is like night and day. Skotty looked much more relaxed which enabled Zach to show off her movement, and he rode her beautifully, really asking her to go forward in the trot at the beginning of the test.  Zach rode calmly and with maturity, really getting the best out of his mare, and not getting flustered when she got the wrong lead after the rein back, and his final halt was perfection. 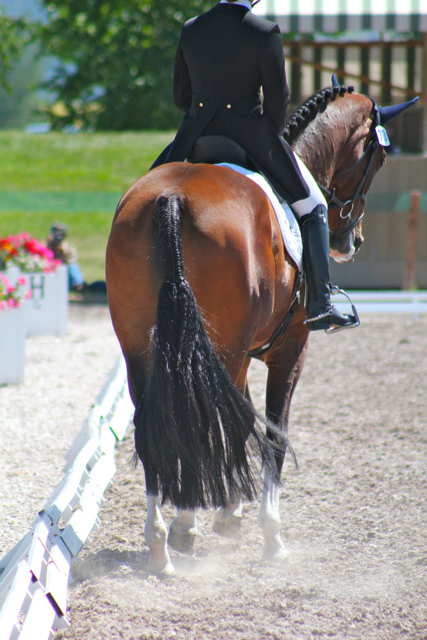 Gina Miles should be very excited about Chanel, as she also had some stunning moments, especially in the trot work, even though their overall score suffered a bit due to tension in the walk to rein back.  Chanel has a very high step behind in the canter which can sometimes be distracting but there is such a lot to like, the very least of which was her immaculately braided tail!  Look for this mare to start challenging R-Star’s California Gal supremacy before too long.  Ben, Rosie and Chanel came all in a row and it was a real treat to watch three such professionally presented tests and three gorgeous movers – I imagine any of these eventers could give the pure dressage guys a run for their money. 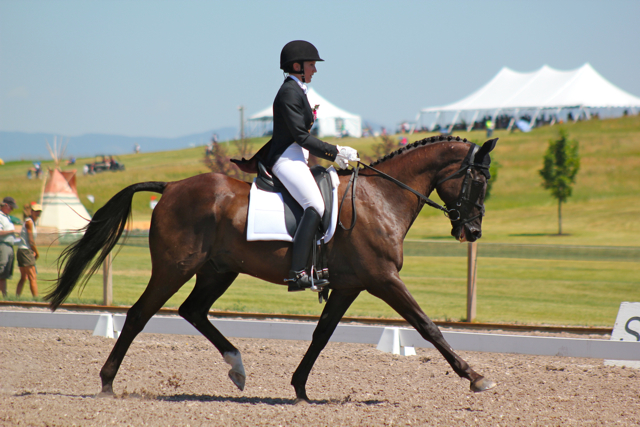 I feel like Katy Groesbeck suffered from being first to go on Oz Poof of Purchase – she rode an immaculate test with only perhaps a tiny bit of tension sometimes evident in her horse’s head and neck but it was smooth, polished and accurate.  Oz The Tin Man was last to go and didn’t have quite the execution of his brother but Katy should be proud to be heading into the second phase with both of them in the top 10. 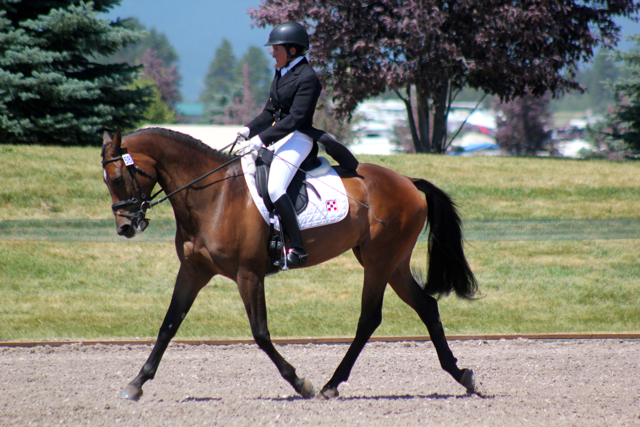 Barb Crabo and her Swedish Warmblood mare Over Easy posted an obedient, workmanlike test with a slight bobble at the second lead change, and then changed again right before the final halt. 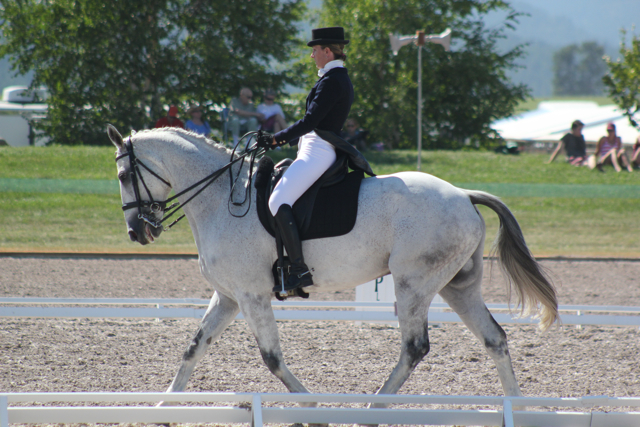 Jeanine Allred and Snap Decision also did a nice test with clear definition between extensions, and on the marker accuracy to lie in 9th place overnight. 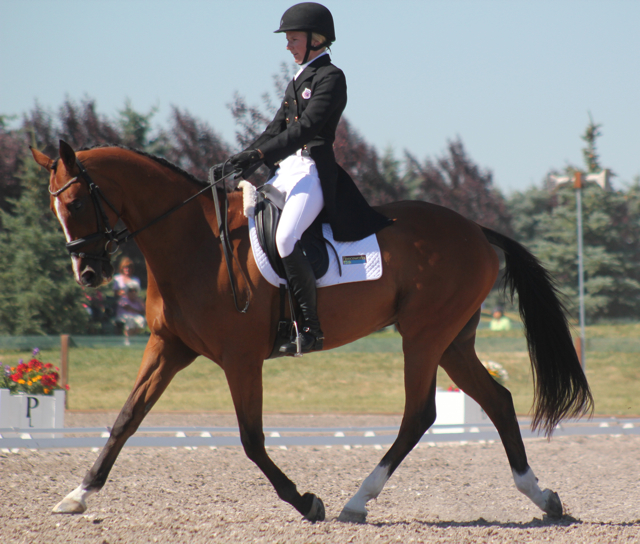 Avery Klunick and In It To Win It

Despite the intense heat and relentless sun, a large crowd stayed to watch this division in the middle of the afternoon.  I think they appreciated the display of quality dressage because it was almost eerily quiet for the most part; so much so that when the odd phone rang it seemed glaringly loud, and a car alarm  that went off during Lauren Billys’ test on Ballingowan Ginger seemed deafening.  Geriann Henderson did a nice test on Kingslee and made a fan of me when she gave a heartfelt good luck to her HB Eventing team mate Emilee Libby who followed her on Nonsensical, “Go Get’Em, show them how it’s done Em!” she told her as she was leaving the arena.  Possibly the most enthusiastic applause of the day was for former USEA president Kevin Baumgardner on Jefferson D’Aurois.  We couldn’t let the day pass without mentioning all the volunteers today who remained cheerful, friendly and helpful throughout the long, hot competition which got underway at 7:15am (first horse on Phase A) and didn’t finish before 4:30pm, or even later for some – this and all competitions would not be possible without you.  Thank you from the entire Eventing Nation, to all the volunteers and also to the judges and organisers, and especially the grooms and families whose days never end!  Saturday starts early again with the CCI** cross country getting underway at 8am, and if everything runs exactly to plan the last horse should have completed the course by 6pm.  Wishing everyone safe rides, and looking forward to another exciting day at Rebecca Farm.  Go Eventing!