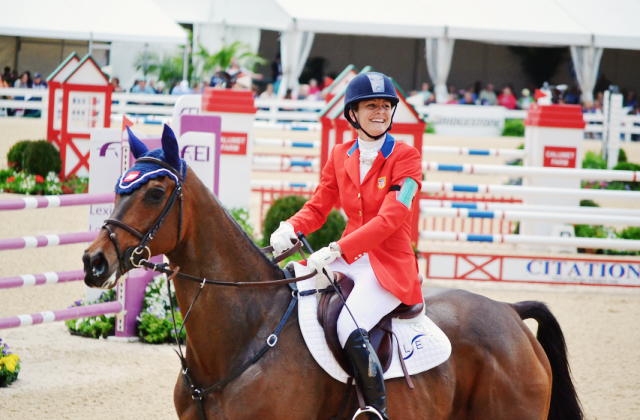 I caught up with each one of them on the phone to get their first reaction to being selected, and it’s exciting to already be able to sense a huge amount of team pride from each one of them. Thanks to Buck, Phillip, Sinead, Boyd, Kim and Lynn on sharing their thoughts, which I’ve quoted directly below:

Buck Davidson: “I’m so excited for Reggie (Ballynoe Castle RM). He’s 14 now, and I feel truly honored every day to be able to ride him. It’s not just his ability that makes him special so much as the everyday professional he is. I’m just a very lucky person. Carl and Cassie (Segal, the owners) are the ones who deserve it. I just happen to be along for the ride.

“I’m also super excited to have Kobe (Park Trader) get his due. I just loved him from the first time I saw him. I still think everyone thinks I’m crazy, but Carl and Cassie never gave up on me or the horse. Both horses have had some fairly high profile things go wrong, and Carl and Cassie have been so great through it all. They never blamed me one time. They stuck by me. I couldn’t be a luckier person.

“When we got the news, I texted all my teammates and said, ‘It’s one thing to get named; now we gotta go win this thing.’ Hopefully Reggie and my best result will come at the World Games, not just for me, but, more importantly, for the team. For me personally to get to where I want to be, I think the American team has to be at the top of the world. We have a really good team of supporters and coaches and staff, and it’s time for everyone to do their job to the best of their ability.”

Phillip Dutton: “I’m excited and a little surprised as well. Obviously the selectors put a lot of thought into it. Trading Aces can do a great score on the flat, and his show jumping is very good too. The horse has got quite a good chance.

I think it’s a very balanced team with good, strong cross-country riders. There’s still a long way to go until then. Hopefully all the horses will stay sound and we can send this group to Europe. The USA has got a good chance.”

Sinead Halpin: “I’m just very proud — proud of my owners and supporters, my team in the barn, and so proud of my horse. It has taken more than a village. I feel like I’ve had a very loyal group that stood by me in all the hard times in the sport. I was just calling all the syndicate owners and the girls in the barn, and everyone is so excited — that’s an awesome feeling.

“The horse feels fantastic, amazing. Sometimes for whatever reason, timing just doesn’t work out. This time, it feels like the timing is aligning. It’s awesome. The team is an awesome blend of people and shows depths in the alternates. The reserves are really, really good too.”

On the selection process: “The way everything has been handled this season has been extremely professional and as transparent as possible. It can’t all be transparent — that’s just the nature of the game — but the coaches, selectors and vets handled everything very well. I felt like there was an open-door policy, and that’s been very cool.”

Boyd Martin: “It’s an honor and a privilege that the U.S. has selected Shamwari. I believe that this is one of the best horses I’ve ever ridden, and I very much appreciate the people that helped me get on the team. First, the owners that got behind the horse. Secondly, Silva, Caitlin (Silliman) and Phillip (Dutton) for keeping the horse tuned up and ready for Luhmühlen while I was limping around. I also have to thank my vets, blacksmiths and the coaching staff at the USEF. But as my mom always said, it’s not just about making the team …”

On Phillip Dutton being named with Trading Aces: “The Kiwis have Andrew Nicholson. The British have William Fox-Pitt. And the U.S. has Phillip Dutton. On every team, you need a veteran that has done battle before.”

Kim Severson: “I’m so excited, surprised and thrilled, and very happy. It’s a good feeling. I think it’s a great team that has a lot of mileage. I hope to do everything right for everyone who has supported me and believed in me. I’m so thankful to Tim and Nina (Ligon) for letting me ride such an amazing horse. I hope to do everyone proud.”

Lynn Symansky: “I’m a little shocked and humbled and honored. I had no idea what to expect. It’s the first time we’ve seen this group of selectors make a team, and I was not 100 percent sure what we would be looking at. I was not holding out high hopes after the pretty bad bout of luck we’ve had this spring. I’m so grateful the selectors felt the same way about my horse as I do.”

On how her leg is healing: “It’s getting better. I can flat all the horses now. Jumping is still pretty tough. One of the (muscle) tears is along the inside of my leg, so it’s quite painful, but it’s completely doable. I’ll keep nursing it along.”

On being the sole owner of Donner: “I’m pretty proud that I brought him along from the very beginning. I certainly wasn’t expecting that one. He’s a nice type, but I didn’t have any high expectations like this. He’s turned out to be a fantastic horse.”

Stay tuned for much more on the U.S. WEQ squad.