We keep hearing from readers raving about how flawlessly the event ran this past weekend at Paradise Farm Horse Trials despite no power due to last week’s ice storm in Aiken. Kristen Wiley sent in this nice thank-you message on behalf of all the riders from Champagne Run Farm in Lexington, Ky. Thank you to all the Paradise Farm officials and volunteers for your hard work! 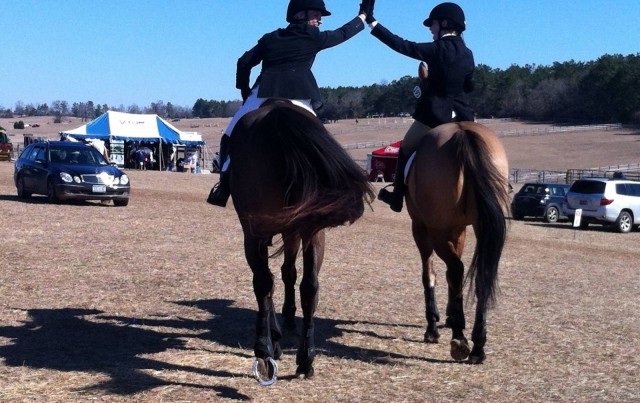 Barb Arnold on Zak’s In Town and Cosby Green on Buckaroo celebrate their stadium rounds. Photo via Kristen Wiley.

The riders at Champagne Run Farm wanted to send a GIANT, MASSIVE, HUMONGOUS  thank you to all the staff and volunteers at Paradise Farm Horse Trials this past weekend. Even though the conditions in the week leading up to the event were basically the opposite of paradise — what with the ice storm, power outages and earthquake — the event went on, and we riders really appreciated it! I am still not sure how the one-day was combined into the two-day in three days from a cell phone, but I’m assuming superpowers were involved.

Our group consisted of 10 horses and eight riders from Champagne Run Farm in Lexington, Ky. We traveled down the Monday before the ice storm, our little heads full of visions of schooling cross country in the sun and warmth. Even though our plans were somewhat thwarted by the ice storm, we were able to ride every day but Wednesday. We eagerly awaited the good weather coming on the weekend, and we were not disappointed. 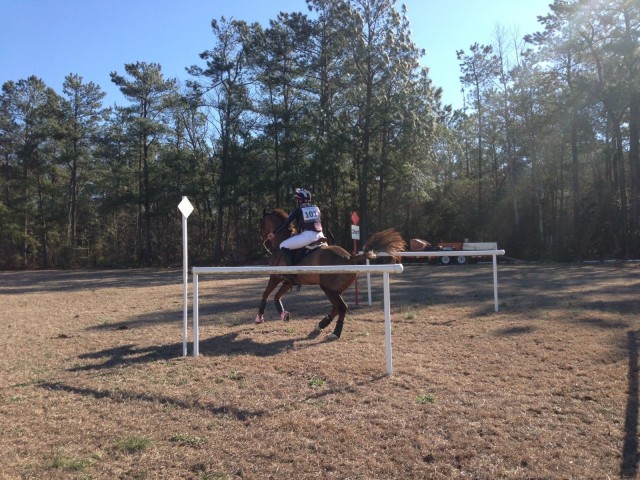 William Robertson and his horse Harley Goldsmith leaving the startbox on their first preliminary (they finished second!). Photo via Kristen Wiley.

Two of our riders were entered in the one day, and one of them had done so because he had three horses to show (one at Preliminary and two at Training), so he was trying to spread them out a bit. He was really worried about how they were all going to be fit in, but throughout both days, he gushed and was very complimentary of the scheduling and how easy it was for him to not only get his rides in, but to care properly for each one of his horses.

Throughout the weekend, ALL of the volunteers and staff that I interacted with were unfailingly polite and cheery. They were full of smiles despite what I imagine was a very stressful week leading up to the weekend. Everyone in our group was thankful for the opportunity to show. Maybe things are not always perfect, but we all have to remember how incredibly privileged we are to ride and show at all. The sun shone on my fabulous cross-country round, and really, that’s what it is all about in the end.