Max Corcoran has kindly written a blog for the Team Lauren Kieffer Eventing newsletter series, powered by Athletux, allowing us to learn more about each person that contributes so much to Lauren's success, and how they feel about being a part of it all. 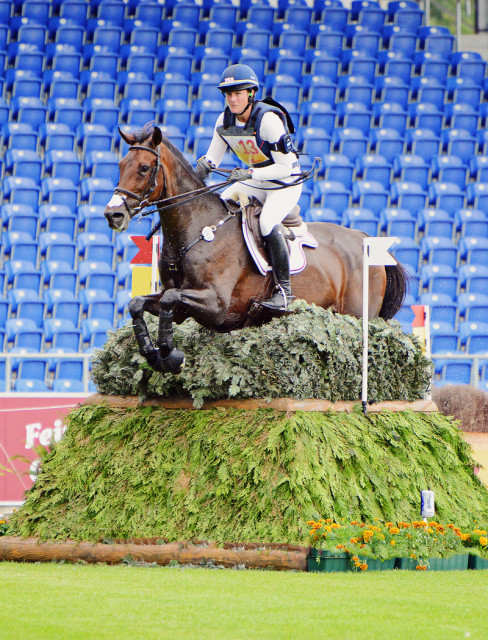 Lauren sent a group email around a few weeks ago asking if we would all write a blog for Lauren Kieffer Equestrian and her program and how we fit into it … I started thinking about when Lauren first came to us at The O’Connor Event Team and the years since — I sent an email back asking if she REALLY wanted me to discuss ALL the details??? Her mom asked if I would send her the unedited version — Jo, it’s on its way!

SO — That girl — first arrived to us at the Virginia Horse Center in June 2005. She had just finished high school, which couldn’t end soon enough for her — not to say Lauren isn’t educated, she is, in ways of life, not geometry, etc.

Her parents came with her — salt of the earth people — straight up and down and no BS. She was too cool as most people are at that age, talking about her Anglo-Arab of her moms and how she had trouble jumping up banks … Another one of those, I thought — I was wrong…

She was a big fish in the small pond of Southern Illinois eventing circuit — the next rising star … uh huh, heard that before too … But day one in the first session we all were all talking about her — David, naturally, was a little late to the party and told us at the end of day two to “keep an eye out for the girl on the chestnut, she is really good and we need to challenge her.” Thanks David, we are already on it!

During camp, Lauren asked about being a working student and Karen and David said, “Sure, when do you want to come?” “Tomorrow,” she answered. We sent her home for a few weeks and she arrived with her two horses ready to conquer the JYOP on the east coast … yup, heard that before too…

Lauren’s first year was a HUGE learning curve for her — she had the intellect and the drive and now was the time to learn patience and discipline. I made her come to events to groom with me — that didn’t go over very well to begin with — but she had to see all sides of upper level eventing; she learned that “rain gear” wasn’t a windbreaker, how to use the washer and dryer and how to cook something more than toast or microwave a frozen meal.

I had seen quite a few working students come and go, but that girl was sticking around for a bit … right — better train this one.

That girl — did a CC* that first fall and David told her to “go fast and be smart.” She missed the second part of that and had 2 stops and still made the time. Her parents watched as David “spoke sternly” to her and nodded along and hugged her as she was upset, but told her “David told you to be smart and you weren’t” … I liked these people!

That girl — watched, learned and worked very hard and only 1 day in the 8 years she worked for me was she late.

That girl — was lucky enough to lease Tigger Too and was going to do her first CCI3* at Fair Hill and he hit the last jump wrong at Morven two weeks prior. Fair Hill, gone; and her CCI2* horse had a lung bleed in his final gallop. Radnor, gone … she stayed home while I was off grooming and rode a horse for me so I could do the Training Three Day at Waradaca and never complained…

That girl — Stayed home and rode our horses while Karen and I were at World Championships, Pan Ams, Olympics, Burghleys, Blenheims, etc – and we always came home to fit, sound horses that were going well….

That girl — is terrible at cleaning tack and couldn’t carry a tune if it were strapped to her back … but she can see a distance to a jump and has some of the softest hands in the country, and she can make a damn good pancake.

That girl — got her heart broken when Tigger Too died on cross country at Jersey Fresh. She was pinned underneath him, she was brave enough to come out the next day and cheer on her friends that had finished the event … the weeks following we stayed up late and found things to do and got her on another horse as soon as opossible; tried to make the sting not burn so much…

That girl — tortured the other working students that didn’t quite make the cut. She was right 90% of the time. We saw many come and go — the stories are endless and we still laugh to this day…

That girl — got good at breaking young horses — fell off, got back on, fell off again, learned the trick, asked the questions, studied, disciplined, rewarded, and now has a fabulous string of horses she has produced from day one … a rare gift in U.S. Eventing

That girl — is the little sister I never had.

That girl — loves to read, loves to go to bed early and loves her dog.

That girl — set up her own business, got her own clients, and made people believe in her. Ms. Mars has certainly been one of her biggest supporters, but she has laid the foundation of that relationship: honesty.

That girl — has the best parents in eventing … Momma Kieffs has busted her hump grooming when Lauren didn’t have a groom and was riding 4 horses at a one day, and makes the best damn “Bang Bang Shrimp” on every event Saturday night. And Papa Kieffs — in his traditional red cross country day shirt, the man that does studs and is great in the finish area — I loved hugging them on the kiss and cry booth at Rolex when she jumped a clear round to finish 2nd in 2014 and again this summer when their kid won a gold medal. They have been there every step of the way — in good and bad — they have wiped my tears and celebrated with me too … I smile every time I see them.

That girl — made the U.S. Team this summer — she earned it. I would be lying if I said that I wasn’t a bit speechless when I saw her appear in her pinque coat on Sunday — and was swallowing back the tears as she jumped a clear round on the same day to help secure that gold medal.

The stories could go on and on — I am lucky to be part of her career and honored she asked me to write for her. I have just finished my latest adventure with Lauren Kieffer Equestrian helping her get settled in the UK at Ann and Nigel Taylor’s fabulous facility for the next three months. She has built up a fabulous team around her — I was very sad to leave.

Heres to many more years of friendship, sisterhood, laughs, tears, celebrations, smiles and hopefully more time on the podium.