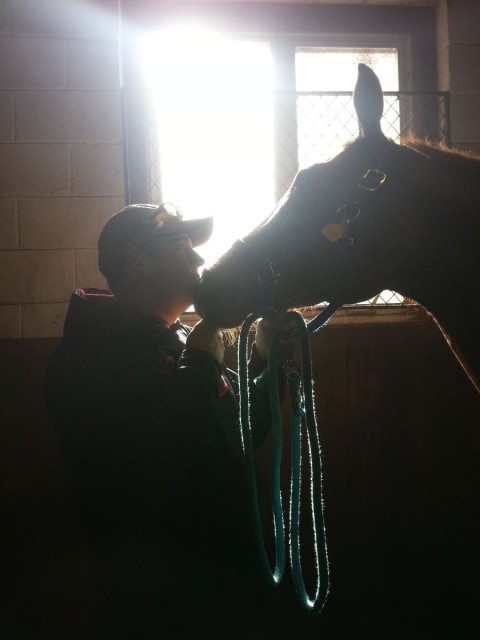 Staying positive, especially in the winter, is so much easier said then done. This is even further complicated by horses being well… horses. The most difficult part of being the steward of our equine partners is they don’t have their own voice. They are not capable of telling you when a certain something hurts and where it is coming from. It is our job to use all of our senses and knowledge to listen to what our horses are telling us with their bodies.

It became apparent to me that Ruth’s progress wasn’t excelling like she should. In fact it seemed that she just wasn’t right especially under saddle. Its not that she was off, truthfully she looked great on the lunge. She was calm and cool and forward with out rushing. No this was something that only happened when she was saddled and being ridden.

Originally I believed it was just her settling into the routine of a new farm with many distractions and tons of energy. But the more I worked with her the more it became glaringly obvious that there was something more then just a new environment. No this seems like she was guarding herself. 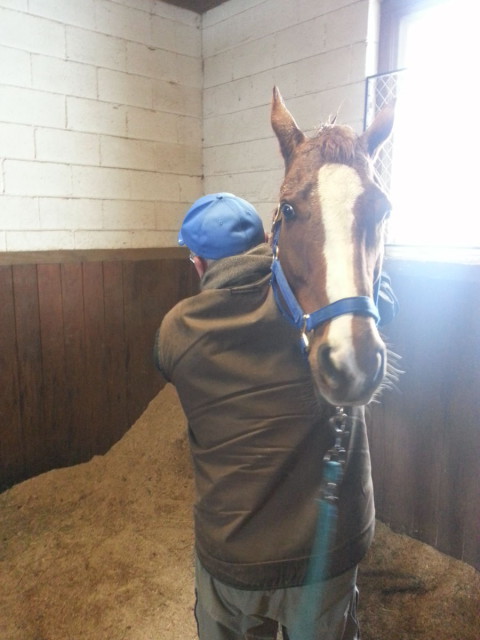 Ruth wasn’t finishing her meals, was becoming more and more tense with each ride, extremely busy in the mouth, and sensitive in certain parts of her barrel were my final signs to make the call. I scheduled a visit from our chiropractic vet Dr. Jim Yanchunis. Dr. Jim is the type of equine practitioner that you want to be involved with. It is his goal not only to help diagnose and treat equine pain but to educate his clientele to better support their equine partners.

Within a minute of Dr. Jim walking into Ruth’s stall he knew without a doubt that she was suffering from ulcers. It was with palpation of certain acupuncture points that solidified his diagnosis. After some chiropractic adjustments, demonstrations of valuable stretches, laser light therapy locations, and several acupuncture needles Dr. Jim handed me a sheet with the break down of his visit. 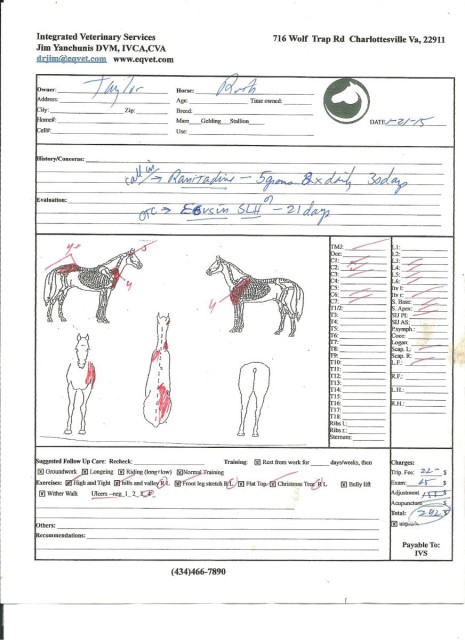 Now we know the cause of our issues, its time to treat them. We were prescribed a 30 day treatment of Ranitidine which is the more commonly knows as Zantac. Also I was instructed to buy a rear bike light which the light produced mimics the light of a class 4 laser. Yes this does seem a bit bizarre to those that have not experienced it first hand, but the results are undeniable.

The prognosis is very good with this simple maintenance and short term medication run. For the next few weeks I will be reducing the demand on Ruth. Most likely I will continue the ground work mentioned in a previous post as well as just enjoying hacking up and down the driveway which will be the extent of the mounted work. Knowing the cause gives me the ability to be positive with the situation I have found myself and and many other commonly find themselves in. 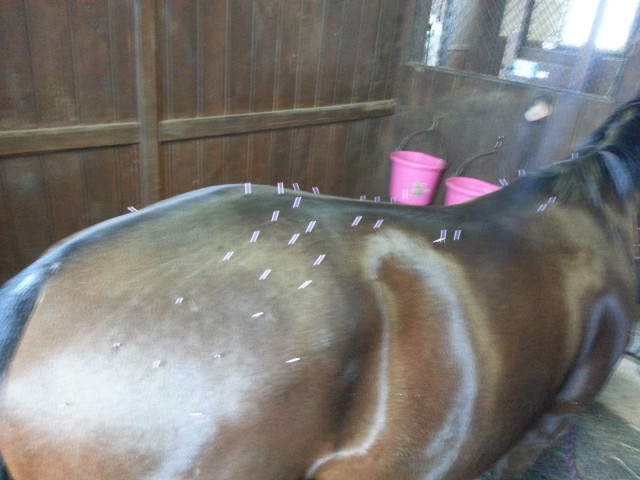 Beans Getting a Bunch of Acupuncture Needles

If you have “That Gut Feeling”, don’t wait but act on it. Make the call to help you figure out the problem. Remember you know when your horse isn’t acting like your horse.