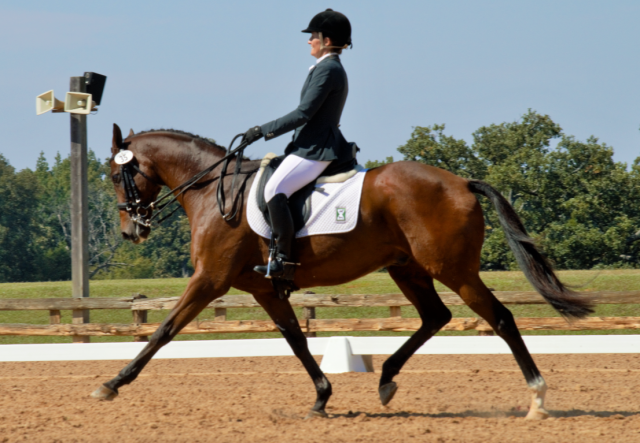 Jenn O'Neill and That'll Do II in the Merial Intermediate dressage yesterday. Photo by Sally Spickard.

Antebellum Farm‘s Jenn O’Neill is competing in the Open Intermediate division at the Nutrena American Eventing Championships with her 15-year-old OTTB gelding, That’ll Do II, better known as Lewis, and today marks his 101st start on cross-country. This is a major accomplishment for a horse who has competed in the upper levels for eight of the 10 years he has been eventing. Jenn and Lewis are  currently in 8th place after dressage on a score of 34.6.

Over the last 10 years, Jenn said that Lewis went from a gangly, failed racehorse to a solid upper-level horse. After seeing Lewis jump for the first time, Jenn’s trainer at the time quipped, “That’ll do; he will at least go intermediate!” Thus, Lewis earned his competition name, and what was originally a resale project quickly became her long-term competition partner and best friend.

“He is my horse of a lifetime,” Jenn said. “I will forever be grateful for the rider he has made me.” Lewis’ stellar personality has made him such a willing partner over the years, Jenn said; he always gives his rider 100 percent and is a quick and careful jumper. “The bond I have made with him over the past 10 years makes him stand out against the rest … I smile every time I ride this horse knowing how lucky I truly am to have him,” she said. 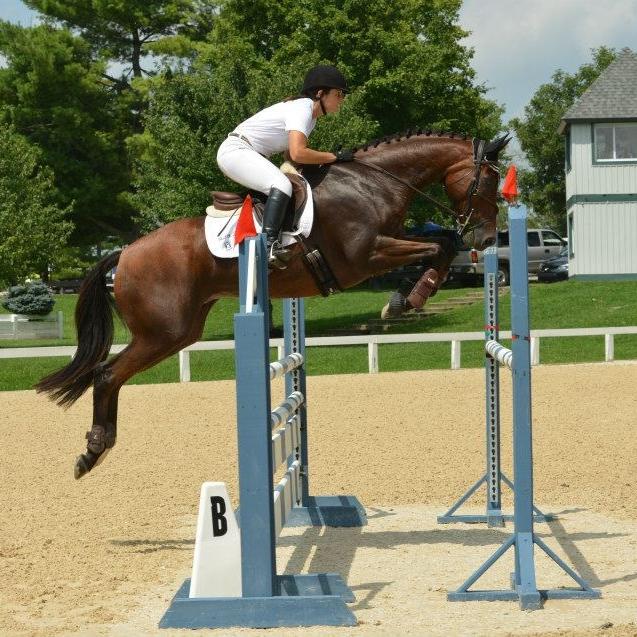 Jenn and Lewis show off their springs. Photo courtesy of Jenn O’Neill.

Not only is Lewis a seasoned upper-level campaigner, but he is also earning a reputation as quite the schoolmaster. “In June, I handed his reins over to my working student, Saige Baker, for her to run her first Training,” Jenn said. “He was wonderful and polite,and gave her a really good experience.”

In just a few weeks, Saige will be riding Lewis again in Training at the Hagyard MidSouth Team Challenge in Lexington, Ky. “It takes a very special horse to be able to compete at a high level and then turn around and help a young rider learn the ropes,” Jenn said. A very special horse indeed. 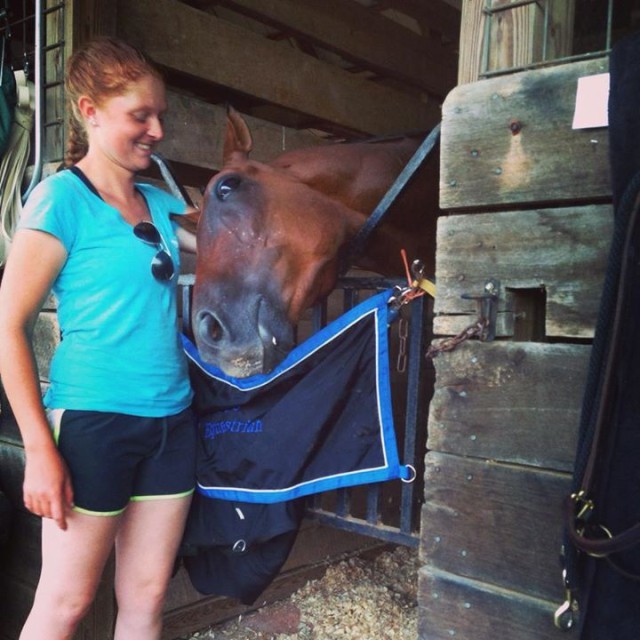 Though this will be Jenn and Lewis’ first time running a Capt. Mark Phillips course, Jenn is confident that she and Lewis will hit their groove early on and answer the questions correctly. The Intermediate course, which is a veritable sidewinder of ups, downs, arounds and overs, will provide a great challenge for its riders and horses alike. Lewis, with 100 starts under his girth, may even see something new on course this afternoon!

EN extends its congratulations and best wishes to Jenn and Lewis, and we hope that we will continue to see much more of him down the line, whether it’s flying around at the upper levels or helping younger riders build their confidence on course. Team That’ll Do will exit the start box today at 3 p.m. CST. Cheer them on if you’re there!