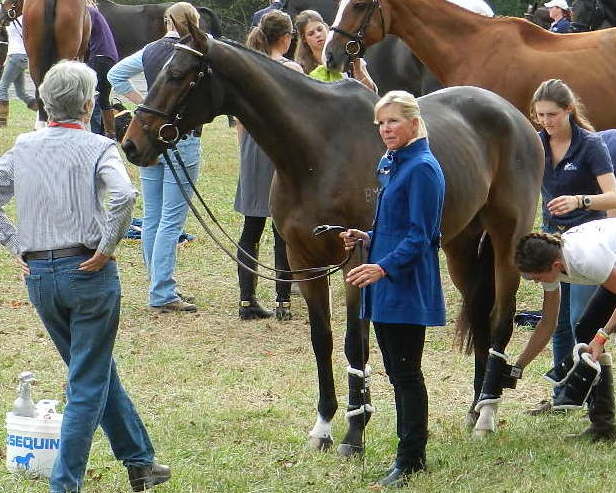 One of my favorite horse-holding pictures: Jan Byyny and Inmidair at the CCI3* jog Wednesday morning at Fair Hill International in 2013, the year they won. Photo by Holly Covey.

The holding of a horse isn’t quite as important as holding a baby, but it may be almost as dangerous — and fulfilling.

There is an art to holding a horse. Anyone who has been around a groom who has been holding lead ropes for most of their adult lives knows what their hands can do with that butter-soft leather lead shank. It is zen.

When we see photos of boyfriends skeptically but hopefully holding the lead rope of a wary, knowing horse, we all know what is just about to happen without even reading the caption. The horse makes a step, takes a pull — and it’s rodeo time.

We’ve all lead a horse down the aisle, thinking of other things, and had the horse remind us however gently or forcefully that leading them is not to be taken lightly: stepping on the end of the lead rope trailing under their feet, breaking the reins getting caught on something they shouldn’t have … and various other disasters.

Unlike many other pets, for which a leash is either an object of decoration (chihuahua), or something a man seizes and controls (pitbull), the lead rope of a horse is more of an umbilical cord at times.

We are united with a piece of twisted cotton, or a bit of leather.

I watch my grazing horse at the end of it and think of how he feels about that grass he is munching. Depending upon the weather on the day, and the moment I am holding him, I will think. I will take a turn either slapping at mosquitoes, tucking my hat over my ears a little lower in the cold, or pull up my hood against the wind. I must stop and I must stand, or slowly shuffle with him. The world doesn’t have to go on spinning for a few moments. We can just stand there.

I relax my hands — no death grip needed. The munching is a soothing rhythm. I watch him eat. I’ll check his legs, worry about his splint. I’ll watch his ears. I’ll check the swish of his tail, the look of his topline, the amount of fat over his ribs. I’ll watch the bend of his ankle and the reach of the hind leg, and check the clinches on the shoes and that the clips are folded in. Then after a while I stop checking things and just watch.

He knows I am there, holding him, watching him. He doesn’t care. He enjoys the grass. He doesn’t want to leave. I don’t either. We don’t talk, we just listen to each other. We eat grass together. 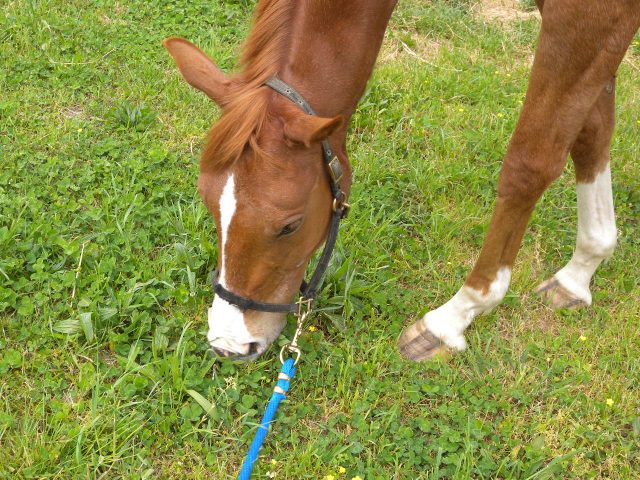 Grooms all over the world are doing it, all times of the year. Sometimes at competitions where they chat and talk with each other. Sometimes at home alone with a barnful of work to do, or an overwhelmingly tough problem to solve, or just general worry about money, relationship, job.

The lead line is a counselor.

And the art of holding a horse covers a lot of ground and stretches from your very first encounter with an equine all the way along your whole life, and hopefully, to the very end. Many who can no longer ride still own horses and handle them and lead them and hold them. Once you hold a horse, you never forget how to do it again even after many years.

The coolest part of holding a horse is the understanding he knows you are holding him, and he can’t run away, yet he can do what he pleases. It goes back to early training when he was just a foal, figuring out that when the first halter was placed on his head, that it meant his life would have meaning.

A halter does not divide the broken from the free. It creates a being, a precious life to hold in your hand and keep safe and train and compete and belong to. A lead rope is a lifeline.

So when you hand a lead over to someone it symbolizes your trust they will care and love that horse as you have come to. It means a new journey starts for them, and it is a sharing on down the line of the ancient trust a human creates with something it has tamed.

Boyfriends, take heed. Holding your girlfriend’s horse has deep and powerful meaning. Now if you could just figure out how to keep him from stepping on the lead rope! (Don’t worry — you’ll get it. Keep at it.)