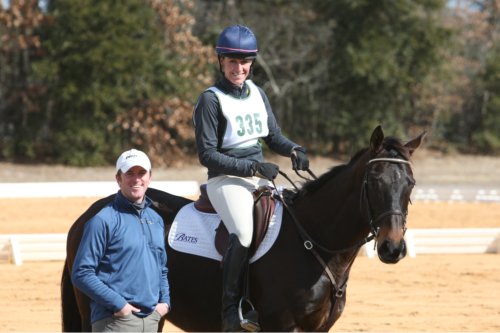 There was a bit of a role reversal in the Faudree camp a few weeks ago, Nat (groom extraordinaire) is usually the one in the baseball cap at the events while Will is sitting on the horse, but they switched for a schooling show at CHP a few weeks ago. Nat rode Fischer, a horse that came directly from the Mid-Atlantic Phase Two Branch of CANTER.

A few weeks ago, John and I had a conversation about starting a column solely dedicated to recognizing good, positive things happening in the horse world. In all fairness it was really just his idea, but then again I’m the one typing right now– we’ll call it a team effort. We wanted a column that recognized the many people and organizations currently dedicating their time, energy, and resources, all with the hopes of aiding horses and bettering the equine community. This week’s recipient is the CANTER organization.

CANTER, which stands for the Communication Alliance to Network Thoroughbred Ex-Racehorses, is a unique organization. Nancy Koch, the national director, was kind enough to speak with me over the phone and give her insight to its inner workings. Basically, the purpose of CANTER is to serve as a go-between for individuals looking to purchase an off-the-track Thoroughbred, and owners of the horses on the track. It does this by providing Internet classifieds that give pictures, descriptions, and prices (usually under 5K) of horses on the backside that need to find homes quickly. As Ms. Koch stated, “The organization was founded in 1997 by an HBPA (Horseman’s Benevolent and Protective Association) member, but it really evolved as the Internet evolved. Since it’s founding, CANTER has aided in moving 13,000 horses onto new careers.”

13,000 horses is a lot of horses. Because they CANTER volunteers do not get involved in the actual sales, accurate tabs of each horse after a sale aren’t recorded, but I think it’s safe to say that with an output number that large, a fair amount of CANTER horses have made their way into Eventing careers. The horses coming off the track are attractors to a wide variety of personalities, from high-profile event riders like Will Faudree, who has two CANTER horses at the moment, to weekend amateur types simply looking for a fun project. That’s a tribute to not only the organization itself, but to the Thoroughbred breed as a whole for serving such a variety of purposes.

Just a couple years after the original CANTER was launched, a second-phase branch was forming. The branch was really the idea of the many volunteers, as through their time around the backside while taking pictures and pulling together ads of saleable horses, they saw many horses with potential for a second career, but not before rehabilitation from a variety of unsoundnesses. It’s a well-known fact that racetracks aren’t the kindest on horses physically; they start training them at a young age, before they have time to completely mature and developed, so breakdowns are very common. “Phase Two” of CANTER, as it was dubbed, is used in cases when horses must be moved immediately off the track, in which case CANTER takes ownership and assumes full responsibility for the horse’s care. It is this phase where footing the bill becomes tricky, as although CANTER receives public grants from places like ASPCA, The Blue Horse Charity and Thoroughbred Charities of America, that funding totals at only 10% of all donations received. The rest of funding is completely dependent on privately owned organizations and individuals.  To rehabilitate these horses in terms of surgeries needed, CANTER partners with local vet teaching hospitals, places like Michigan State. The second factor in Phase Two is the rehabilitation required once a horse is out of surgery.  Although CANTER does have a foster-care program so qualifying individuals can rehab certain horses until they become marketable, the most effective way of rehabilitating Phase Two horses is by CANTER renting out a block of stalls at a boarding facility (usually at a reduced rate) and keeping many in one place. It’s a costly option but works well as the horses are developed under one eye, and when a potential buyer comes to try a horse, they can try several during the same visit.

As with everything in life, if you want to be considered remarkable, you must first do what hasn’t previously been done, then you must do it before anyone else does, and to be truly remarkable you need to have solidified your vision before anyone else has even had the thought. Doing so requires creativity, imagination, and the utilization of resources, and is really what the CANTER organization is all about. Instead of tackling an old problem in a conventional way, they set out from the beginning to change the game in a completely untested way. The pay-off is that CANTER has grown into a nationally recognizable organization, with several thousand volunteers and donors nationwide.

For more information on CANTER, and to find out how you can help, click here.