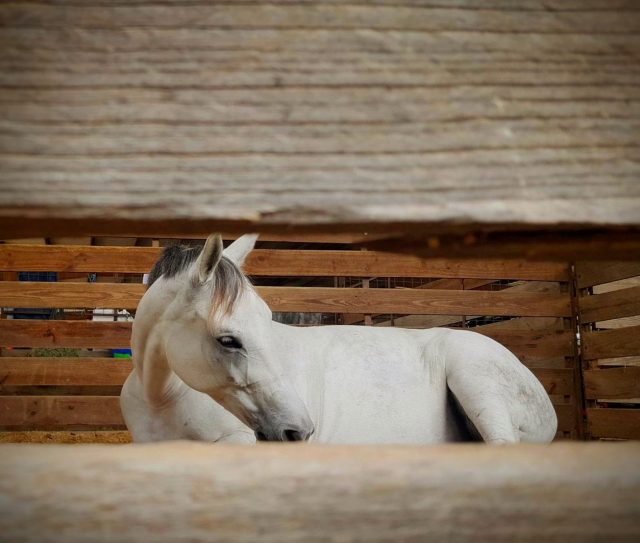 Horse Poor is the state of being penniless due to having, loving, riding, looking at horses. Perhaps one would take vacations or have cars made from the current decade if one were to not have horses. But then again, what one would really do with all that extra time and money? Sounds boring.

However, believe it or not, there are some advantages to the Horse Poor Lifestyle. Besides teaching kids about the value of hard work, blah blah blah, and reminding adults just how sore their bodies can be, lessons can be learned in the art of creativity, grit, and sacrifice.

One of the benefits to being Horse Poor is making something from nothing. No, I’m not talking about starting and making your horse yourself. I’m not even talking about how you sell Rodan & Fields in your sidegig. Perhaps Macgyvering is an antiquated term, but raise your hand if you have:

To become certified in Horse Poor Creativity™, you really need to stretch the limits of your imagination to accomplish a task as affordably and effectively as possible. The non-horseperson equivalent is most likely rewashing the papertowels and plastic baggies for future use. Except, in the Horse Poor horseworld, instead of being ridiculed, you are lauded for your ingenuity.

Another plus to being Horse Poor: Want it? Work for it. Such a luxury to have horses, but such hustle to make it happen. The grit horsemen have is undeniable and unparalleled. Broke your foot? Well, the hospital can wait until everyone is fed, turned out, and all the chores are done. Bone protruding? Reference above, duct tape and zip ties are your constant friends.

The grit comes because our sport is an expensive one. Many outsiders think we have money because we have horses, but the insiders know how laughable the misconception is. We know exactly what the next show, clinic, lesson costs in Ramen. We work extra jobs to generate extra income and to pay off vet bills. We know how far we can push ourselves and stretch our dollars. Being Horse Poor asks you if you really want it. If you didn’t, why would you put yourself through all the drudgery?

Having grit and hustle becomes an asset in this crazy sport. Sure, being able to put your bills on autopay and go crazy at the tack store (ahem or Finger Lakes Finest) would really feel good. Working incredibly, ridiculously, absurdly, needlessly hard at something to eventually earn a modicum of success in the nebulous future? Priceless. If ‘nothing tastes as good as skinny feels’ then nothing bought feels as good as something earned. We aren’t talking 25¢ satin here. It may be working extra hours at the store to get that lesson or nailing the lead change precisely upon turning in your homework to your instructor. Sure, there is a way to buy what you want, but when you earn it you value it more.

Another benefit to being Horse Poor is it makes you prioritize. We go without so our horses, or kids, don’t have to. You know you’re broke when you feed the dogs and not yourself. Or that you wear the same pair of Target flats nearly every day all year until you’re basically walking barefoot, but Angel Muffin gets new kicks every four weeks, like clockwork. Sacrifice is unique in every situation. Everyone has a line, and as if psychic, your horse unwittingly knows how to push you to said line.

Like Grit, Sacrifice takes deliberate and intentional toiling away. However, where they differ seems to be that grit earns the reward. Grit is not giving in and not giving up, sacrifice comes from letting go.  Sacrifice supports grit due to Opportunity Cost; every choice means letting the other option go. Sacrifice is knowing full well what you are kissing goodbye. Goodbye, retirement! Goodbye, Caribbean honeymoon! Goodbye, sanity! Hello, horses.

Ultimately, Horse Poor is nothing to be ashamed of, rather it is a badge of honor. Maybe the world sees some silly choices, like who really needs 10 bridles, 30 saddle pads, 25 pairs of breeches, countless assorted polos, four helmets, and every bit every made for one horse? No, that’s just aposematism—a warning for those that can’t handle the equestrogen. Part of the world can’t handle us, we are strong, we are inventive, we grind, we carefully consider and select. We are intimidating and a force to be reckoned with should we so chose. Horse Poor can be your shame, or it can be your strength.