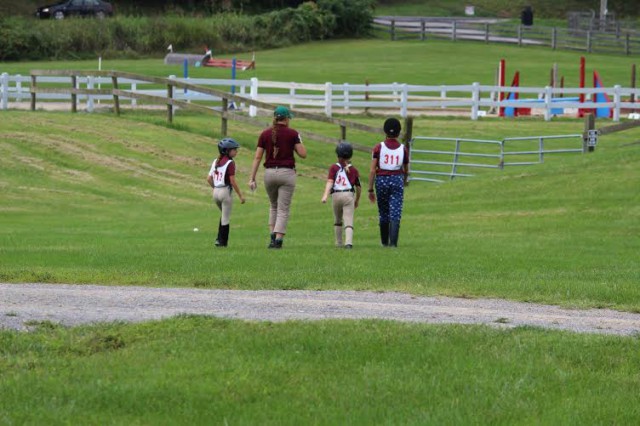 Walking the course at D Rally. Photo by Cindy Holmes.

I’m still trying to figure out if my pony club members are exceptional, or if I just see them that way.

A year ago I stood up at the USEA Meeting in defense of my kids. Somehow, the open town hall meeting on the future of eventing had turned into a slog against kids-these-days, and pony club kids were singled out as being lazy, disinterested, and mounted on very expensive horses they were unable to ride.

This went so against my experiences, against my children, that I got up and made some sort of speech. Looking back, I don’t remember precisely what I said or exactly why I felt compelled to say it, except that keeping my mouth shut has never been one of my virtues.

I do remember saying that based on my experience, if we want kids to be part of the eventing community, we have to offer them community. That what my pony clubbers have right now is each other, and that that has been the strongest force for good in our club.

Last year, a private donation let us bring the phenomenal Cathy Wieschhoff to our summer camp. Our camp is already the single favorite event on our calendar. The kids keep their ponies on my farm and sleep in my basement.

In the evenings I show them where the showers are, feed them, and leave them alone. The first night they goof off. The second night they work. We hold our spring rating on the third day of camp, so the second night is one giant member-directed ratings prep, with everyone not rating either quizzing or cleaning tack for those who are.

Moving the rating to camp may be the single best thing we’ve ever done, because it invests the entire club in the success of the tests. Each kid that passes is cheered and high-fived and group-hugged–and, because of that, we now have non-rating members showing up at our fall rating, too, just to pay back the love and the tack cleaning.

Anyway, here in the sticks we don’t get a lot of world-class instruction, so when Cathy came to camp my kids were on point. They were neat and prepared and respectful, and they rode hard. They loved Cathy and she loved them. At the end of camp I told them if we wanted her back we’d have to raise a bunch of money. They got busy and raised it.

Our annual fun show, which we had a couple of weeks ago, usually gives us most of our operating funds for the year.

This year, the entire membership worked as one – parents, too – from the 8-year-old who spent a long hot day resetting the trail class after each competitor to the grad student who came back just to work registration, every single family pitching in for the concessions and the former club member who judged the show for free.

A couple of my older members came to me with a plan to revamp our unmounted meetings. One of my C2s has an idea about how to best prepare our C2s, all seven of them, for the C3 rating.

Oh, and last year my club worked Rolex. Only two of them had ever been to Rolex before. Most didn’t really know what Rolex was. They do now. William Fox-Pitt tipped his hat to one of our younger members, who’d had a really crummy year up until then.

He thanked her for her work and she’ll never forget that, not as long as she lives. She went on to win her division at the D event rally. She has eventing stars in her eyes.

Best of all, as we were cleaning up from the horse show, I saw two little girls struggling to carry a heavy box between them. One of them was our newest member, just joined; the other, a child I didn’t really know. “Thank you for helping,” I said to her.