In this excerpt from the new book Know Better to Do Better, eventer Denny Emerson admits he misused pressure in horse training in the past and explains how his methods have improved with the horse in mind. 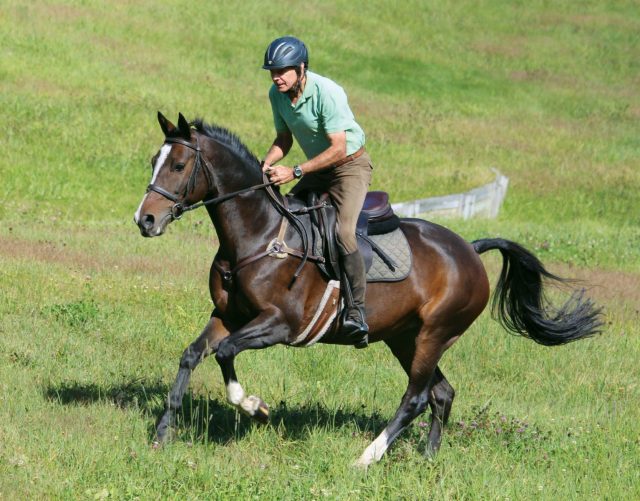 Photo by May Emerson.

One mistake that I used to make was to increase the pressure too soon if the horse didn’t respond quickly enough. Let’s say I applied my right leg to his flank to ask him to move his haunches to the left. And let’s say I used fairly light pressure to get this to happen. Well, if I didn’t get a quick response, I would use my leg again, but this time I would probably give him a little kick. If he still didn’t move, I would give him a harder kick. Then a harder kick. Sooner or later, he would move away from the discomfort of my kicking leg.

The problem with this tactic of “escalating” the force of the request is that while I did get my horse to move away from my leg, there was too much fear and discomfort involved. By banging on his side with my heel or spur, I was getting him to give to the pressure, but at the same time I was making him anxious and nervous. Sure, I was winning the battle, but I was losing the war.

What I mean by “losing the war” is that a tense horse has other issues that are worse than the piece I was trying to fix. A tense horse gets too strong, say. So now I have to use more hand to restrain him. So now my horse gets even more nervous because I am hanging on his mouth. The harder I try, the more tight he gets, so the harder I try, and now the whole thing is like that old saying, “Going to hell in a handbasket.” And I was the one who started the downhill slide by using an aid that was too strong.

So, how should I have obtained the response? He didn’t listen to my light leg pressure. Why shouldn’t I use more if he fails to respond? Well, because of what I just said. Harder and harder pressure makes him more nervous. The way to get him to move is not to bang on his sides, but to “pester” him until he moves.

I have never read any book about riding that talks about “pestering” a horse. They always use the terms like “apply the aids,” as if the horse will magically understand what the heck that means. But think. Why does a horse switch his tail at a fly? Because the horse knows that the fly will bite him if he doesn’t get rid of the damn thing. The horse is not terrified by the fly. The fly isn’t an attacking mountain lion. It isn’t even a stinging wasp. It’s a fly. Even an annoying fly will get a horse to respond, but it is not a panicked response. In a way, we riders need to be mildly annoying flies. We need to gently pester the horse. We need to mildly annoy the horse. Sure, the horse books don’t say “pester” or “annoy,” but what else are we doing? Does the horse want to move his haunches away from our legs? Does he want to pick up a right lead canter? No. He wants to be left alone in his pasture to eat grass with his friends.

So back to teaching the horse to move left from my right leg. I apply a little pressure on his right side, behind the girth. Nothing happens. He just stands there like a stone statue. So I gently poke him again. Still no response. Everything in my being is saying, “Kick the damn horse. Make him obey!” But I know where that will lead, right? He’ll move away, but I will have created tension. So I poke him again. And again. His ears maybe go back. I am annoying him—not scaring him, but annoying him—to the point that he notices me. I repeat my little aid. He steps away from my leg. I stop.

In a few seconds, here comes my leg again, pester, pester. When he moves away, the pestering ceases. In a week of doing this, right leg to move left, left leg to move right, my horse is starting to get the picture. Two plus two is starting to become four for him. I am building in a conditioned response.

A man who was giving elephant rides at the King Brothers’ Circus had trained not only elephants but also big cats, bears, dogs, seals—you name it. Someone asked, “Do you train them all the same way?” And he said, “All but the dogs and seals. When the dog does the right thing I flip him a biscuit, and when the seal does the right thing, I flip him a fish. All the others, when they do what I want, I take off the pressure.”

I’ve heard this described as “programming a computer.” An untrained horse is an “unprogrammed computer.” We are “installing buttons.” The key is that we are installing those buttons calmly and consistently rather than roughly and forcefully.

There was a Greek king and general, in ancient times, whose name was Pyrrhus. In some battle against the Romans, the king’s troops won, but half the army was lost. In the next battle, they were conquered by the Romans. So there came to be a term, “Pyrrhic victory,” to describe what happens when someone wins a battle, but loses the war. That’s what I used to have, lots of Pyrrhic victories. By using aids that were too forceful, I would get my horse to move away from my leg, or give to my hand, but from fear, pain, duress, rather than from conditioned response. The nervous anxiety that my horse would have because of my rough aids made him almost impossible to train unless I just kept adding force to force to force.

Once you go the tough route, it starts that terrible downward spiral. Rider force creates horse fear. Horse fear creates horse resistance. Horse resistance creates rider anger. Rider anger creates more force. You can see too well where this is going. The next thing will be stronger, harsher bits, or draw reins, or other leverage devices, and it all started with my not understanding how to create conditioned responses through “gentle pester” rather than sharp demand.

In order for us, as riders who are also trainers, to be able to teach all these conditioned responses, to install these various buttons, to program these living computers, we have to be able to use the same sets of stimulus and release each time.

This excerpt from Know Better to Do Better by Denny Emerson is reprinted with permission from Trafalgar Square Books (www.horseandriderbooks.com). 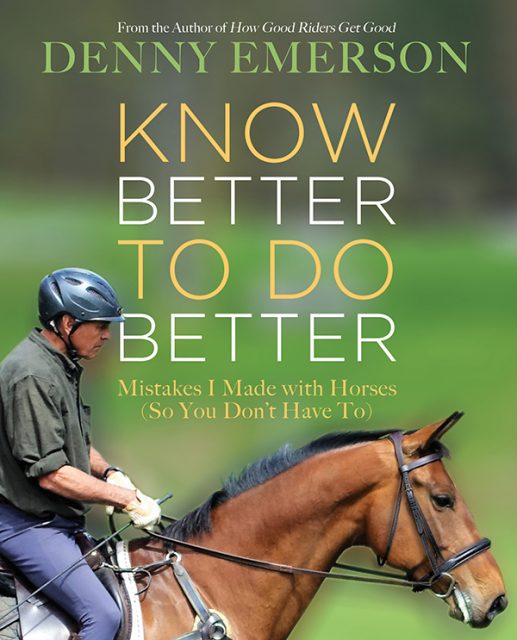