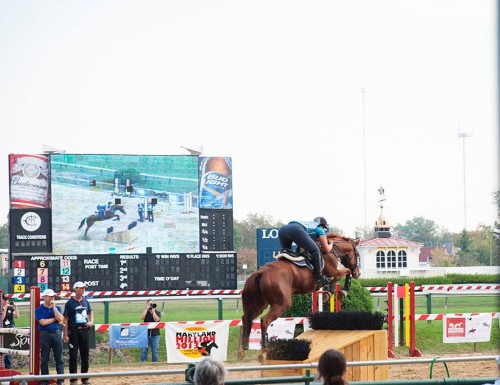 Win the War and I at the Retired Racehorse Training Project. Photo by Niamh O'Connell.

A few months ago, I wrote an article discussing whether or not I should syndicate Bug. After a lot of thought and conversations with Dr. Mark Hart of the Event Owners Task Force, I have decided to move forward with syndication. The decision was a difficult one, as I have brought Bug along myself, and I was a bit nervous about giving up a part of him. However, the more I thought about it, the more excited I got about sharing this amazing horse with others. He really is the horse of a lifetime and a lot of fun to be involved with.

So, what goes into a syndication? I was pretty clueless about how it all worked, so I needed a lot of guidance. Luckily for me, the Event Owners Task Force can be utilized by anyone with an upper-level horse that is interested in syndication. Dr. Mark Hart is in charge of the Task Force, and I spent a lot of time emailing and conversing with him. He is a wealth of knowledge about how this process works, so it was great talking with him to figure out what would work best for Bug and I.

After a lot of discussion, this is what we finally decided on:

1. I would sell 49 percent of Bug to the syndication for $30,000. There are ways to write a contract stating that I would always keep control of my horse, but after hearing so many horror stories of horses being sold out from under people, I decided to be safe and keep my 51 percent controlling share. My boy is just too precious to me to risk losing him.

2.  Because I am an up-and-comer and Bug and I need to prove ourselves, we decided to keep the total buy in low. Being an Advanced/CIC3* horse, Bug is probably worth more than $61,000. However, I wanted to keep the buy in low so that people who may not normally be involved in a syndicate might be able to buy in if interested. With 10 shares being offered, this made the buy in $3,000 per share.

3.  Because I am an up-and-comer, I wanted the syndication to be as exciting for people as I could make it. The initial $30,000 buy-in money will then be put toward buying another up-and-coming horse. This makes the syndication a two-horse investment. If the second horse is ever sold, the owners of the syndicate stand to make some profit.

4.  Competing an upper-level horse is expensive, to say the least. Again, I wanted the syndication to be as affordable as I could make it. The yearly maintenance fee is $3,000, and this will go toward the upkeep of both horses. I was excited to learn from Mark that this fee is something that is tax deductible for investors, so it’s another benefit for syndicate owners.

As with most eventing syndicates, people that want to be involved must realize that the chance of making a profit on the syndication is very low. These syndicates are about wanting to support a horse and rider and be involved with them as they move up the levels and, hopefully, represent the U.S. internationally.  A lot of the big shows are starting to have an Owner’s Tent out on the cross-country course. This is a great way for syndicate owners to hang out in style as they watch their horses go around a tough course.

Every syndication may come with its own perks, as well. I am still working on the perks for Bug’s syndicate, but I am planning to include some extra bonuses to make it fun for everyone. Also, if a group of people is interested in buying a share, there are no rules that they can not go in together to purchase one share — the more the merrier!

I am very excited to announce that the first share of the “Forget the Battle, Win the War Syndicate” has been purchased by Dr. Desiree Lerro of Echo Knoll Farm and Patrick Forestall of Videos by Patrick. I am very excited to have them on Bug’s team, and I greatly appreciate their support!

If anyone else is interested in more information on this syndication, please feel free to e-mail me at [email protected]. I think this is going to be a fun endeavor for everyone involved.