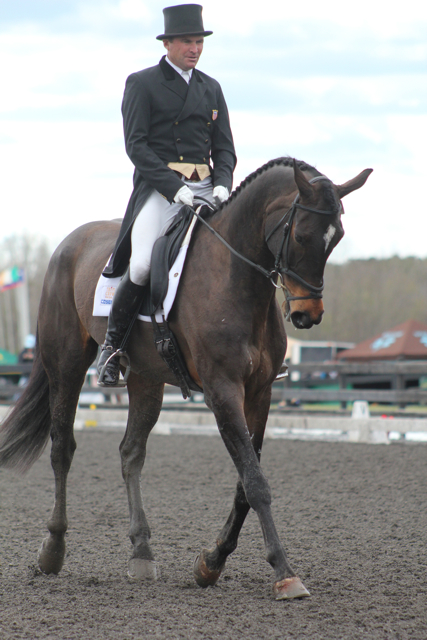 Lynn Symansky and Donner came in to the three star arena after the lunch break and did a beautiful test, holding on the lead until the very end of the day but Phillip Dutton and Bruce Duchossois’ Mighty Nice turned in a stunning mistake-free performance to ultimately  win the dressage, which Phillip said later, was more about staying calm and focused than going all out, “Obviously I’m very pleased; I rode him reasonably conservatively and erred on the side of softness and relaxation rather than going for more movement. The three star test has become pretty standard and easy for him whereas a year ago it was not, and we’ve been working pretty hard so that’s a good sign but of course he’s going to have to do a four star test next time out (Rolex) so that’s going to be a little harder! It’s great to have a horse like this because I know he’s going to be good, I just have to train him well and ride him well.”  US Dressage Olympian Michael Barisone was on hand here in North Carolina cementing the training he’s been giving Phillip and Boyd Martin over the winter, “Michael has been coming to Aiken and he’s stood here for the last two and a half days in the cold and the rain and supervised everything; David (O’Connor) has overseen it all so I’m excited, they’re both great guys and they work well together, they’ve both contributed and nobody’s worried about who’s getting the limelight, they’ve both helped to get the best out of the horse and I’m really pleased.” 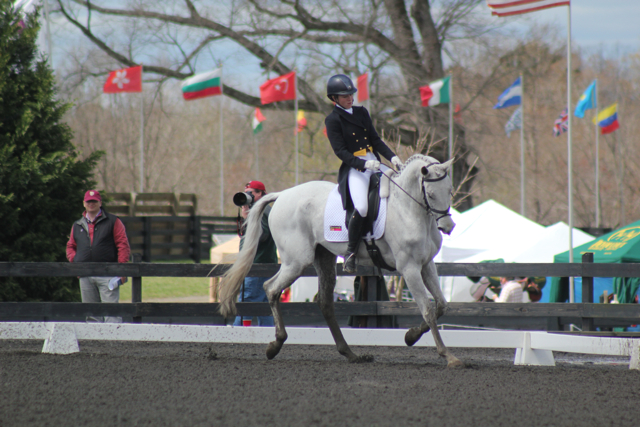 Caitlin on her CIC*** ride, Catch A Star

Caitlin Silliman once again finds herself leading the dressage phase on Remington in the CIC**,  just as she did two weeks ago in the Intermediate Division at Southern Pines, a lead that she held onto throughout for the win and explained that she’s on completely the opposite end of the spectrum to Phillip and Mighty Nice, “I’m very, very lucky to have him, he’s obviously a very experienced horse, he’s been all over the world. It’s different to be able to go into the ring and be able to really ride the test out of the horse, he knows what he’s doing so you can go in there and go for it a little bit. It’s definitely training me to go in there and ride for every point.” 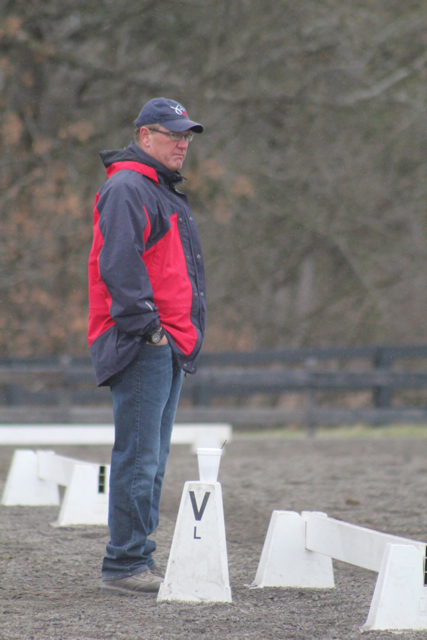 The common demoninator: Michael Barisone has been helping Boyd, Phillip and Caitlin

Phillip promised that he would also ride fairly conservatively across country on Sunday on Mighty Nice, despite being in the lead in the PRO Tour Series after a win at the Red Hills CIC***, and says the CIC format will suit all his horses, “Mighty Nice will definitely get time faults on Sunday – he can be a little bit arrogant on the cross country and thinks he knows it all and he can get strong, so after we did have a little bit of a go at Red Hills the best thing for the horse for Kentucky will be to go around quietly and slowly and to respect the jumps and not get too aggressive.  The course has changed considerably since last year, it looks nice. I don’t particularly like show-jumping the horses after they’ve run cross country because to me it’s a better show-jumping experience for them if they haven’t galloped, and they’re not stiff and sore. I like this way, I think it’s a good way to train the horses and obviously the ultimate test is the CCI and they have to jump after the cross country and as riders and trainers we have to learn how to ride a tired horse in the show-jumping phase, but from a training point of view I like jumping the day before. Some horses are different and are actually a bit better after the cross country and some not as good, but overall I would say I like this way.”

Phillip also has Atlas handily placed in 14th and Fernhill Fugitive in 17th place, while Fernhill Eagle is in 14th place in the Advanced Division, “Atlas went during the pouring rain on Thursday afternoon and he’s getting there; he’s not quite as established as Mighty Nice but next year I think he’s going to be a super horse. Eagle…we’re starting to get the dressage! Hopefully in a couple of weeks he’ll be even better again.” 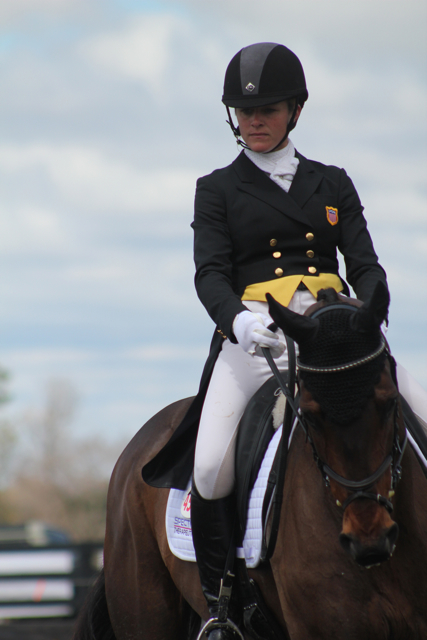 However Lynn Symansky shared that Donner would prefer the original format, “For my horse he’s better if he does cross country first – he can be a tight horse and a bit spooky and the show-jumping first can back him off a bit more on the cross country so it’s better to get him out. I’ll go out in the morning on Saturday before the show-jumping and have a bit of a gallop and pop him over something.”

Marilyn Little lies third in both the CIC** with RF Black Pearl, and in the CIC*** with RF Smoke on the Water. While Black Pearl is a new ride this spring, Smoke campaigned with Marilyn in Europe last year and finished the year with a top placing at Fairhill last autumn, “Smoke was quite fresh, the freshest I’ve ever felt him but he still put in a nice performance. Whereas a year ago he might not have been able to cope with that, now he handles it pretty well and turns it into power in the ring instead of a loss of attention, so I’m really happy with that.” Although Marilyn has entered Smoke on the Water for Rolex she would really like to take him to France, “I’ve entered Rolex as a back-up; I’m hoping to taking him to Saumur. I’ve applied for the grant there but there’s plenty of good horses out here right now and in the event that I wasn’t given the grant then I would take him to Rolex.”  A decision will be made after this weekend, “The fact is that this is still the last prep before Rolex and for fitness purposes this is still only his second event out so he needs to have a plenty aggressive enough, fast run in case he does go to Rolex, and if he goes to Saumur I want to know what I have right now so I expect him to gallop for the time. The same thing for RF Demeter – she’s going for the time; the footing is great, the course is beautifully designed, it’s a great springboard for wherever you want to go for the summer, it’s a great time to know what you have. “ 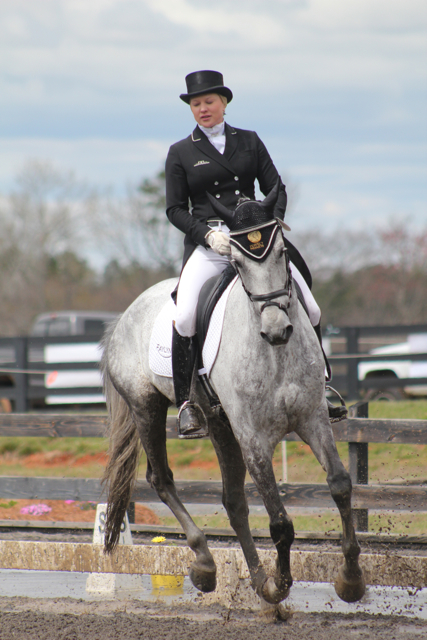 Marilyn Little and Smoke on the Water

Many thanks to Jenni for doing such a wonderful job with all the updates today which means that I can now go ahead and just post some of my favourite photos for no other reason than I want to! Thanks as always for reading, and thanks especially to everyone who came out to do howdaa yoga, it was such fun – we’ll have a full report on that plus information on how to buy the video just in case you couldn’t come but would still like to be a part of it and donate, probably early next week. 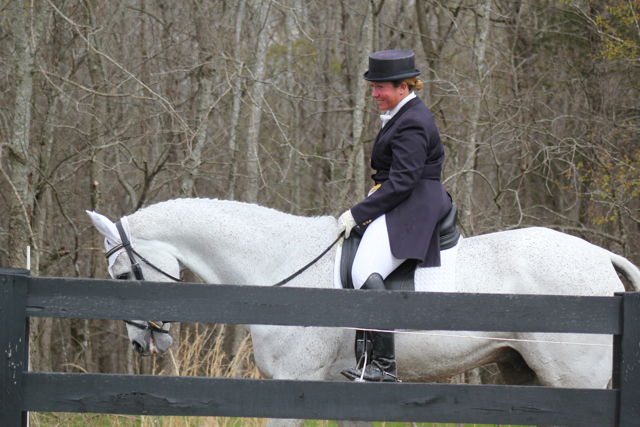 I thought Becky’s test on Can’t Fire Me was lovely and actually deserved to be better placed than equal 12th. The good news is that she’s right on track for Rolex, it was a far more polished and smooth test than the one she did a couple of weeks ago at Southern Pines, and if she puts in the same adjustments in the next two weeks you know she’ll be very close to unbeatable. 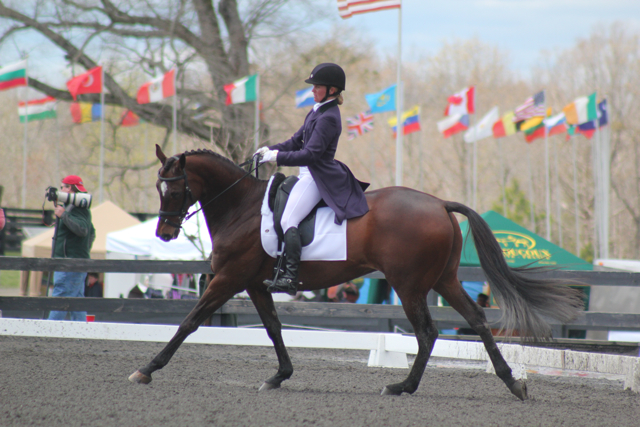 Equally I thought Here’s To You was one of the best tests in the division, although Emily was one of several riders to forget to halt/rein back at A. Here’s To You  looks so light in the contact and yet so correct and consistent, very soft, very forward, very fluid and with great rhythm –  and they make it look easy, sigh! 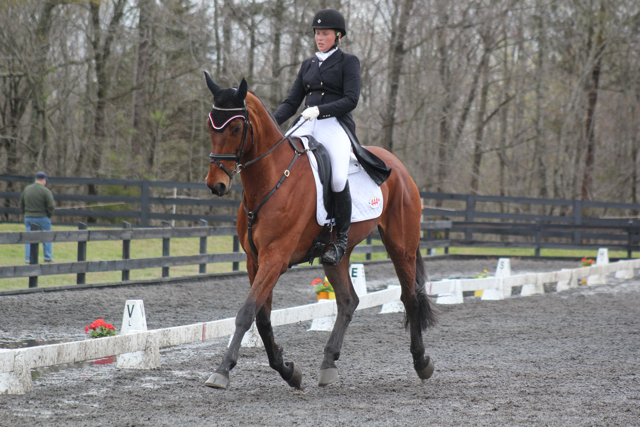 Shandiss McDonald’s Rockfield Grant Juan was reserve for the Canadian Olympic team last year and now seems to be growing into that huge frame and movement of his, and really coming into his own; he looked so impressive covering the ground with his enormous stride and Shandiss has done so well to get the hang of him. I can’t wait to see them go at Rolex. 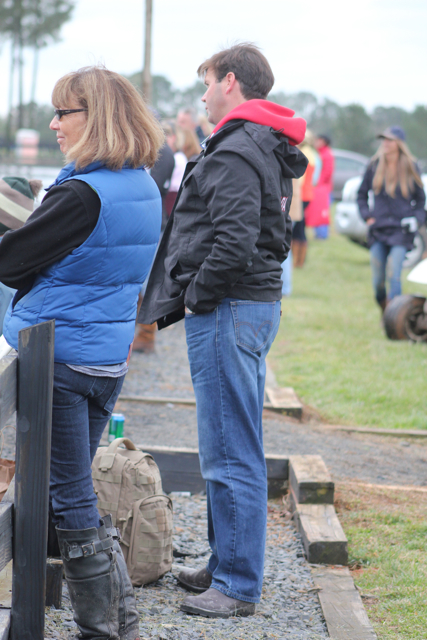 It may have been the elusive thumbs up from David O’Connor that once signaled a good ride but in true Aussie style Clayton gave Shandiss a wolf whistle as she came out the ring to take the morning lead. 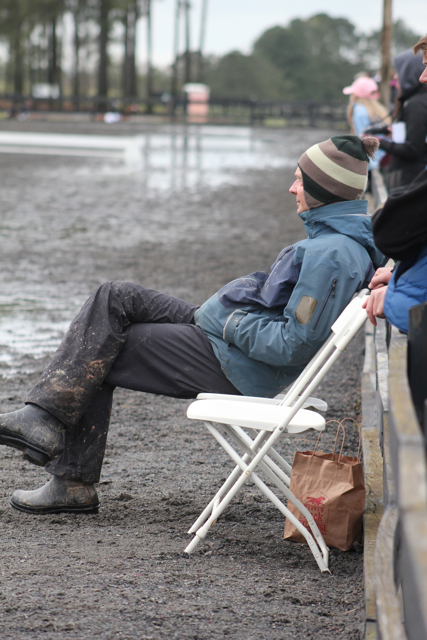 The volunteers have been amazing all week in the very worst of the weather, but Nicole Parkin and Shandiss both went straight after the short mid-morning break and the ring crew hadn’t returned yet – never fear, fellow countryman Peter Barry to the rescue who opened and then secured the arena at A for both ladies – what a gentleman! 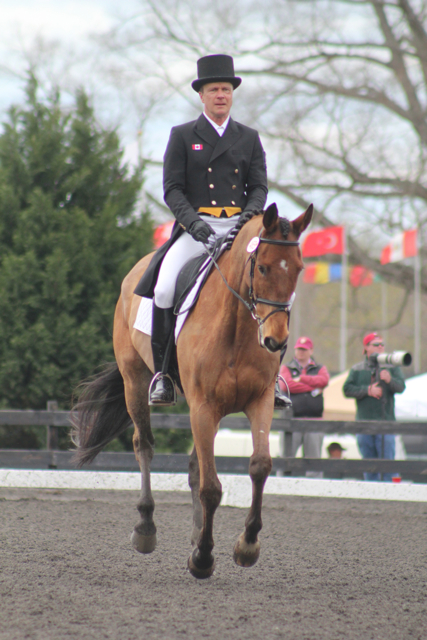 Peter and Kilrodan Abbot later in the afternoon 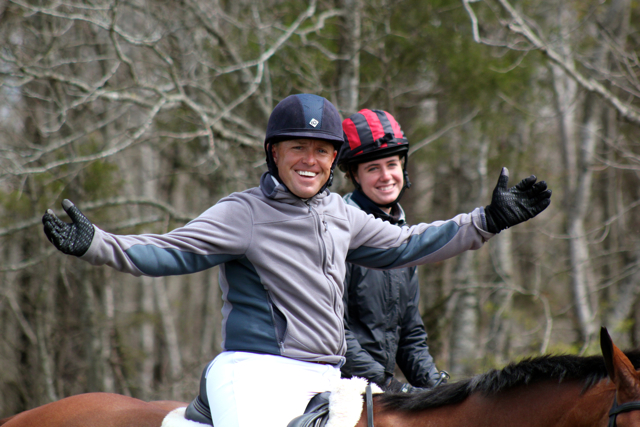 It hasn’t all been rain and cold and misery –  Buck and Caroline could brighten anyone’s day! 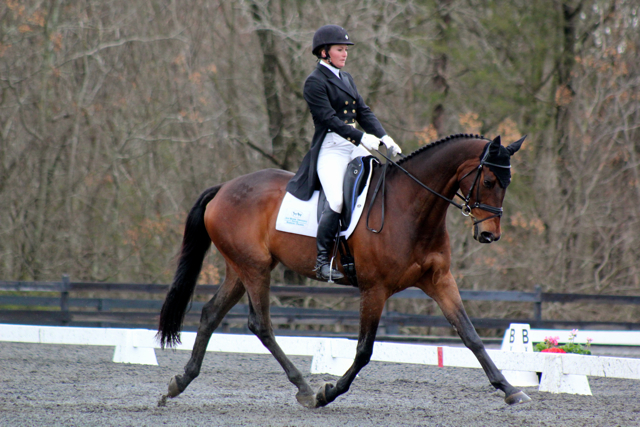 I was very surprised to see Hannah Sue Burnett score a 53.1 for 30th 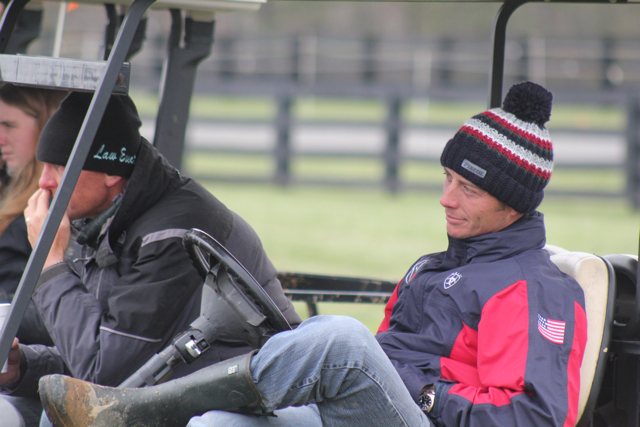 Jon Holling – one third of The Fork’s Charlie’s Angels 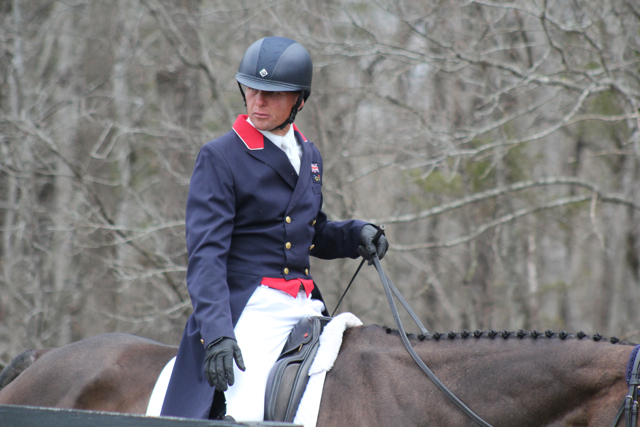 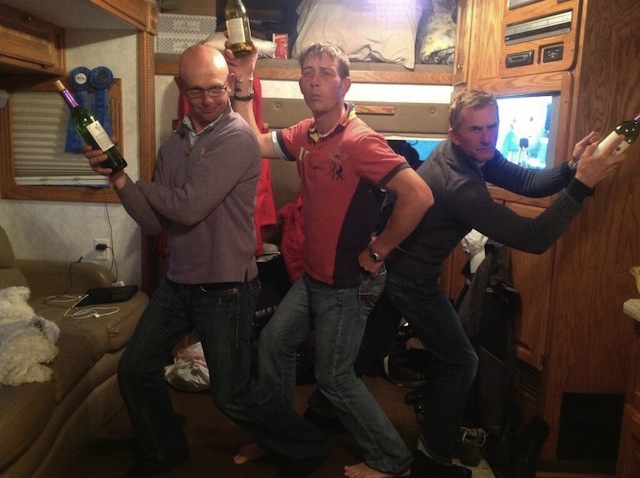 With Rick Wallace – the Trifecta! 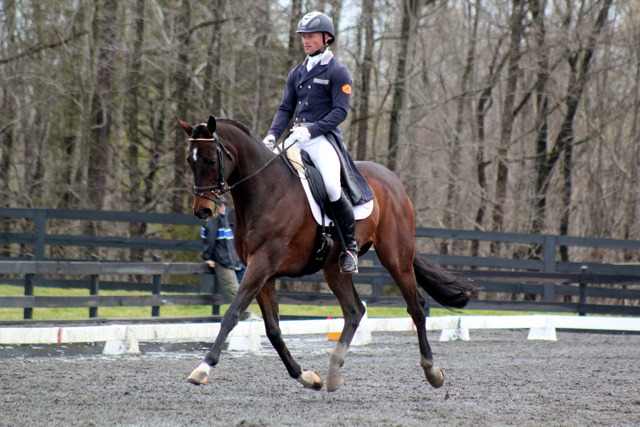 Mensa did a nice, correct test for Michael Pollard 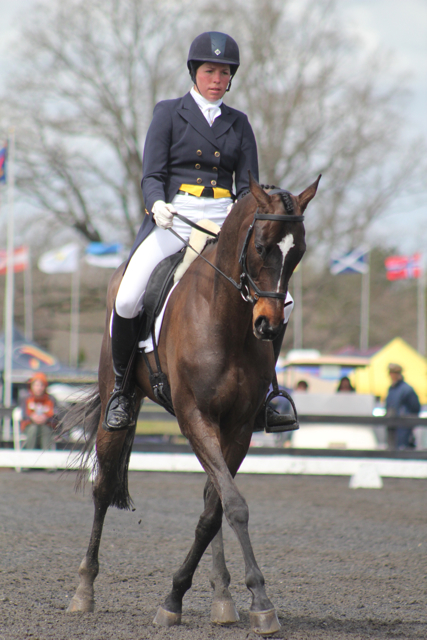 Love Pirate! So happy to see Donner, Pirate, Mensa and many others representing the OTTB and thoroughbred in general here this weekend. 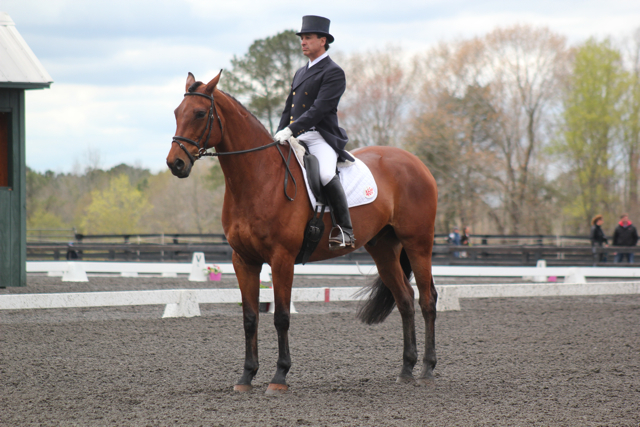 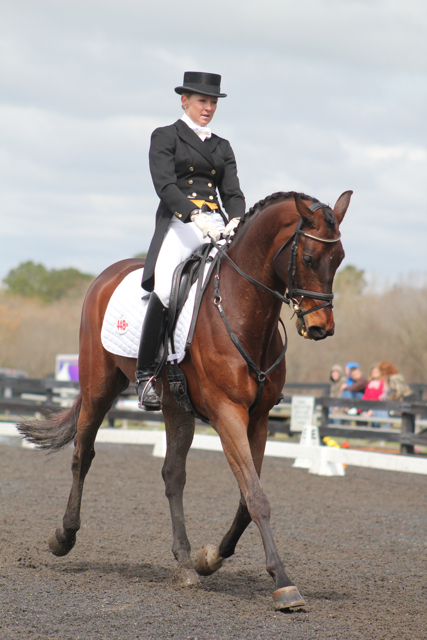 Wolf and Susan Beebee consolidate their strong Spring form with another lovely test. If you’re in the Kentucky area next weekend Susan will be teaching a clinic in Lexington – check out Bill Kraatz’ facebook page for details.

Jenni and I will be bringing you much more from The Fork Saturday and Sunday – thanks again for visiting, and Go Eventing!