While many of us still were sidelined in a post-Christmas coma, Area II adult amateur Malinda Lawrence was getting a jump start on her season at the first-ever Fork Stables Winter Camp. Led by Sinead Halpin and Tik Maynard with guest appearances from a host of other household eventing names, Malinda came away from the experience with some shiny new tools in her riding toolkit. She kindly took the time to share her impressions of the camp experience with EN — many thanks, Malinda! 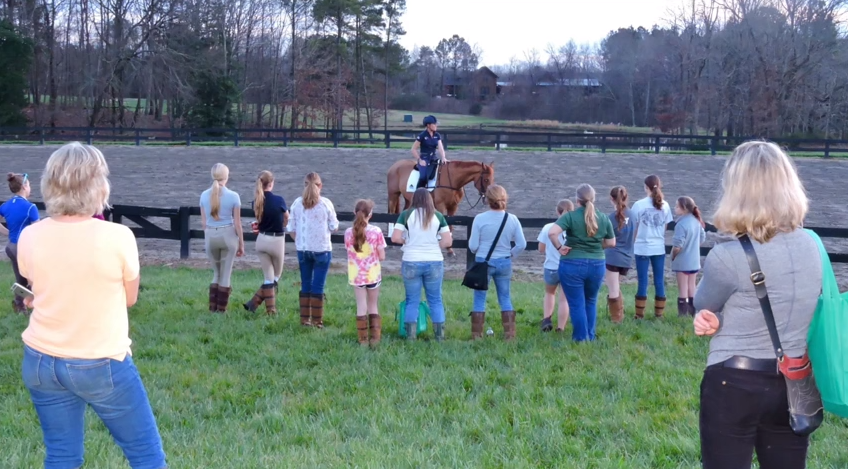 Screenshot from “2015 Winter Camp with Tik Maynard and Sinead Halpin.”

The week between Christmas and New Year’s Day always seems like dead air time from a riding perspective. This year I skipped out on disassembling holiday decorations and devouring leftovers in favor of giving Sinead Halpin and Tik Maynard’s inaugural Fork Stables Winter Camp a whirl.

So it was that I managed to replace normally wasted time with some of the best quality time I’ve ever spent in the saddle, and the ideal jump start to the 2016 eventing season.

In the interests of full disclosure, I am something of an eventing camp junkie aficionado. So far I’ve completed the Phillip Dutton Eventing Academy, the O’Connor Equestrian Camp (twice), and the Area I adult riders camp. (“Denny-Camp,” the famous, long-standing tradition, and perhaps the original eventing camp, produced twice annually by the legendary Denny Emerson, is next on my list).

For me, they’re an opportunity to train with professional competitors so accomplished that they’re too in demand to spend much time teaching at my level. The camp format allows unprecedented access for pretty much anyone who wants to attend badly enough to scrape together the registration fee. No *’s or qualifying rides are required.

I think of camps as the Training Sessions for ordinary people. I’ve appreciated and enjoyed each one. Although this was the first-ever camp offering by Sinead and Tik, eventing’s new power couple, it may very well have been my favorite.

First of all, the setting was the The Fork. Eventers everywhere will recognize it as the site of the popular three-star event of the same name. Among its lesser-known features are cozy and beautiful on-site accommodations including The Fork Lodge and Carriage House. Owners Jim and Bernadette Cogdell were lovely and welcoming, turning over the run of the place (museum-quality barn, multiple all-weather rings, legendary cross-country course, and “The Ordinary”) to us.

Sinead kicked off the week with a narrated demonstration of dressage on the most famous of her competition horses, Tate (“Manoir de Carneville” in the record books). Inducted into the Equus Foundation’s Horse Stars Hall of Fame in 2013, the Selle Francais gelding’s resume boasts a third-place finish at Rolex 2011 and a second-place finish at Burghley 2012.

Impressive as the horse is to watch, the best part of this demo (for me) was Sinead’s comprehensive step-by-step narration of exactly what she did to produce each effortless-looking movement.

For her next trick, Sinead plucked a lucky contestant from the audience, gave her a leg up, and challenged her to repeat the performance. Sinead explained her view that the truest indication of a trained horse is its ability and willingness to perform consistently in response to correct aids no matter who is doing the asking.

It Starts on the Ground

Anyone who has attended the O’Connor Equestrian Camps or otherwise had the privilege of working for either O’C for any length of time will know where this concept comes from, and the importance they, and an increasing number of High Performance riders, place on groundwork in the training process.

But anyone who saw Tik’s performance at the 2015 Retired Racehorse Project’s Thoroughbred Makeover in Kentucky last fall with the aptly-named Remarkable 54, or the subsequent viral videos, knows that he takes it to a whole other level.

One almost gets the impression that Tik’s horses, at some point, are going to wind up trained enough to complete all three phases entirely by themselves, rider-optional — the eventing equivalent of driverless cars. 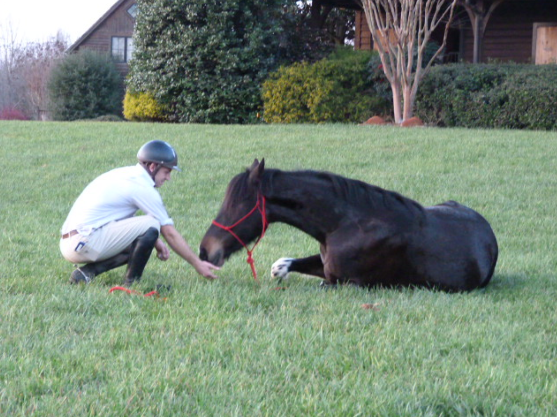 Tik demonstrates groundwork with “Flash,” whom he has taught, among other things, to both heel and lay down. Photo courtesy of  Malinda Lawrence.

Advice in a To-Go Box

Riding sessions were small, four riders at most, and offered equal opportunities to train with Tik and Sinead, whose different but complimentary approaches blended well. The sessions conveyed the perfect amount of strategically-targeted information. They tended more toward concrete suggestions than broad, abstract philosophical discussion.

Perhaps there were no earth-shattering new revelations. Every rider, and therefore every instructor, is a product of their own training and experience. Both Tik and Sinead are an interesting combination of solid fundamentals from the masters and their own, more recent, unique perspectives from the trenches of upper-level eventing as it is Right Now.

The result, I found, was a lot of practical, timely advice that proved very useful at fixing what I was doing in that moment, and (hopefully) keeping it fixed.

While this sounds like a lot of information to keep in one’s head at one time, both Tik and Sinead were great at breaking things down into a “do this, don’t do that” set of instructions that was easy to follow at any given moment.

A Good Time to Be Bad

As luck would have it, my horse selected our first showjumping session with Sinead as a good time to be Very Naughty: running through all of the fences, continually gaining speed, ignoring me altogether, and generally conducting himself like, um, well, a stereotypical racehorse.

This is always the classic clinic-goers dilemma. On the one hand, when riding with High Performance clinicians, part of me always wants to be perfect. However, where I really need professional help is in learning how to cope when things start coming apart at the seams.

My horse is so easygoing so much of the time, I don’t always get to work on crisis management. So I should probably thank him for contributing to the requisite “challenging environment” needed to refine our skills.

I am pretty sure we scared the crap out of Sinead although she was too polite to say so. Nonetheless, she was terrific at pointing out exactly when and where we needed to half-halt, when the half-halt was not going “all the way through,” and when we finally hit upon The Right Canter, and now needed to “just stay the same.”

I think my most valuable takeaway was distinguishing that “staying the same” is NOT the same thing as “not doing anything.” On those rare occasions that I find myself approaching the fence in The Right Canter, doing nothing helps me avoid screwing up by either pushing my horse through, or holding him off of, his ideal takeoff spot.

The part I always forget, however, is that when the horse changes it up before the fence, whether by picking up speed or stalling out and losing energy, then it IS incumbent on me the rider to do something to fix it, even in the final strides before the jump.

The only disappointment came when three days of intermittent rain transformed The Fork’s magnificent cross-country course into a giant red clay slip-n-slide, rendering it off-limits.

Undaunted, the die-hards at The Fork assembled an impressive array of portable XC fences in their largest all-weather outdoor arena and saved the day with a fair approximation of the real thing: coops, rolltops, chevrons, ascending log oxers, pheasant-feeders, skinnies, and even a big giant egg. 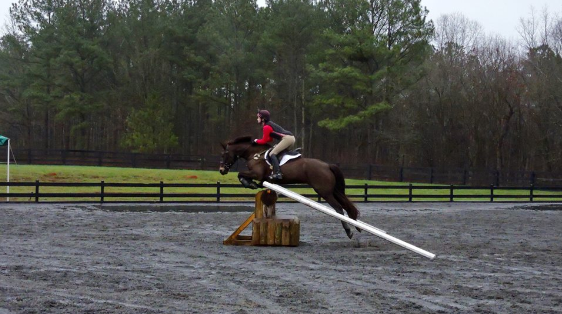 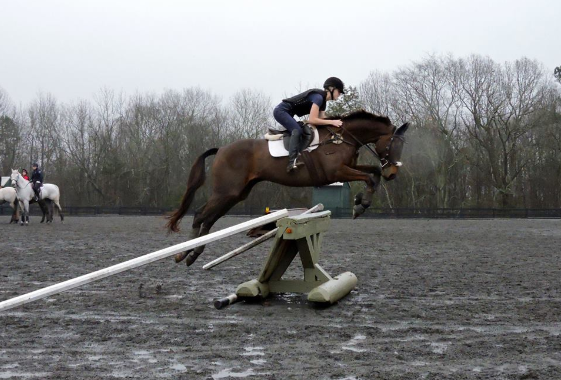 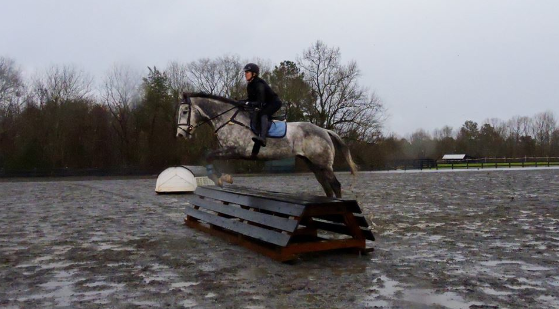 Although jumping is categorically my favorite phase of any camp or event, my favorite aspect of this camp might actually have been dressage day. It featured an afternoon of simulated dressage tests with Sinead’s fellow U.S. Olympic Team alternate Will Faudree judging at C, while international eventer and licensed USDF/USEF judge Mark Weissbecker offered commentary as well as scoring at E.

Weissbecker’s explanations of the various movements, and where and why riders left points on the table, was a particular crowd-pleaser with the auditors and horsey-moms and dads. Time was built into the schedule for either Tik or Sinead to coach each individual rider through the perfect warm-up for their test. Each camper received, in addition to their written test results, a video of their test, complete with a recording of Faudree’s real-time commentary.

The afternoon was topped off by dinner and a fascinating Q & A with eventing great Bobby Costello. This all-star cast made it a day and evening to remember for sure.

The big advantage to a camp format versus a one- or even two-day clinic is the opportunity to return over a succession of classes to see whether and how a rider has implemented the advice received, to prevent misinterpretation or overcorrection, and to get follow-up advice on refining technique.

It has a lot of less tangible benefits as well, like hearing the inside stories of how great horses were found and made, and learning the pros’ secrets to fitness, grooming, equipment, nutrition, and managing bizarre-o horse allergies and behavioral quirks.

Tik and Sinead made optimal use of all of the available time, fitting sessions on groundwork, starting young horses, horsemanship, and question-and-answer on every conceivable topic, around at least twice-daily rides.

I trailered down with my barnmate, 16-year-old Elissa Ogburn and her young OTTB “Boomer,” whom she started herself and competed in the 2015 Retired Racehorse Project’s Thoroughbred Makeover last October. Elissa’s never been to an eventing camp before but apparently this experience has gotten her hooked.

“I got such great feedback,” she said. “But I also learned a lot on the ground and also from just talking with Sinead, Tik and the other campers’ questions. The whole time was well-used.” 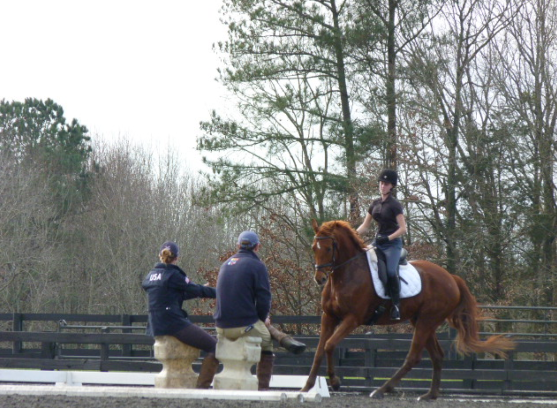 Sinead and Tik coach Elissa Ogburn and her 2015 RRP Thoroughbred Makeover project “Boomer” through a perfect warmup for her dressage test with Judge Will Faudree at C. Photo courtesy of Malina Lawrence.

Elissa sprung for an additional private dressage lesson from Sinead and reported, “she’s very observant. She saw things I didn’t know I was doing and knew specifically how to fix them, so I could see and feel a difference right away.”

Overall, Elissa said her camp experience “taught me to make decisions. Boomer is so quiet and low key it’s easy to forget how green he still is. Sometimes, I don’t want to do the wrong thing so I wind up not doing anything. So instead of both of us doing nothing, I’m learning to be more decisive.”

There has been some discussion of making this camp a continuing feature, annually or maybe even more frequently. Personally, I hope so. While all of the camps I’ve attended were worth repeating, I’m unaware of any that build in a component for continuing education for returning students.

At $650 for essentially three and a half days (with the option for additional private lessons) plus $25/night stabling, The Fork Winter Camp was enough time to be highly effective yet less expensive than other options with longer formats. It was well-organized and ran smoothly, largely thanks to Sinead and Tik’s hard-working business manager Mollie Staretorp.

Overall, it was an experience I highly recommend.

Here’s a link to a video re-cap of the whole event:

Thank you so much for sharing, Malinda! We love learning vicariously through our readers’ clinic reports — send yours to [email protected]