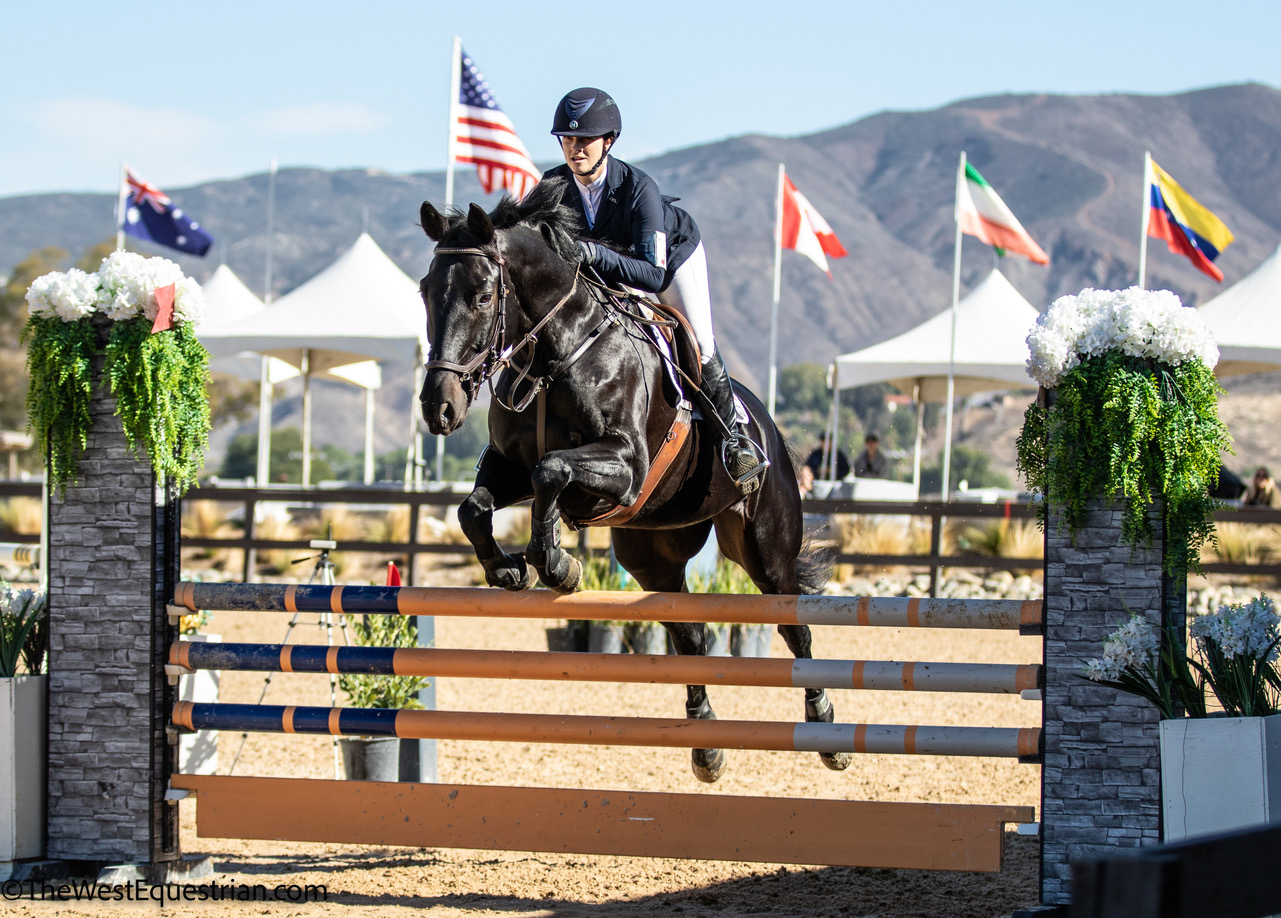 Creating an excellent experience for every stakeholder in the sport is the modus operandi for Robert Kellerhouse and the crew behind this week’s Galway Downs International. It’s a mentality that translates to the lower-level horses and riders getting the same showcase as those in the international divisions, which concluded with Saturday afternoon’s 2*, 3* and 4* Long format competition.

The innovative “Challenge” format took center stage today with show jumping in the Grand Prix Arena. Now on its second year at this US Eventing Association Area VI season closer, the Challenge was a hit last year and even more so this year. The Modified-Training, Training-Novice and Novice-Beginner Novice Challenges serve as a gradual steppingstone to promote and celebrate advancing up the levels.

“I think it’s a really cool concept that I hope to see take off at other places around the country,” commented US Eventing Association Executive Director Rob Burk. “The majority of our sport is not competing at the FEI levels. For me, having really fun, rewarding opportunities like this to step up through the divisions is something we should be focusing our efforts on.” 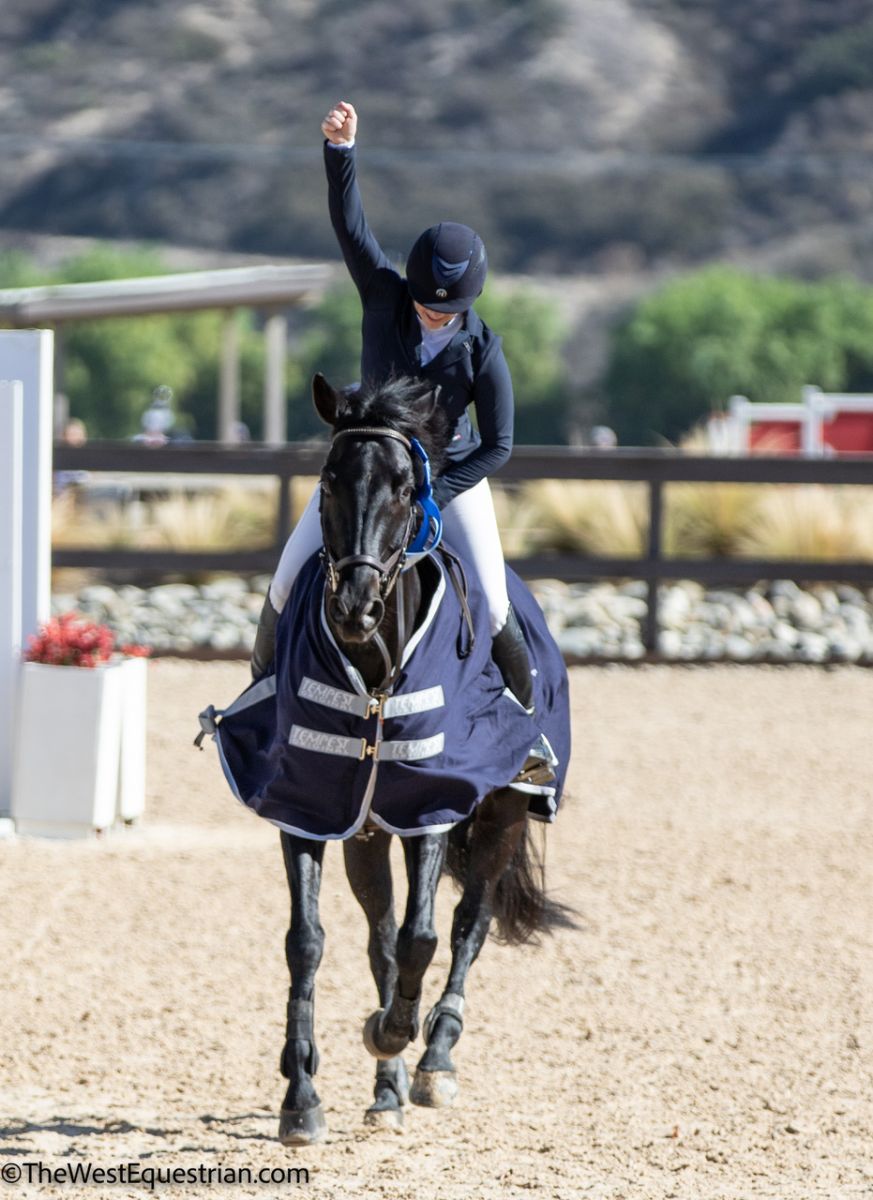 Jordan Taylor agreed with Burk wholeheartedly. The Temecula equestrian won the Modified Training Challenge with her 6-year-old homebred Thoroughbred, Dartmouth. The gelding is out of Taylor’s now retired Advanced mare, Cambridge. The pair were in the hunt from Friday’s 25.2 dressage score. Fault-free over Allessandra Alexander-Shinn’s cross-country and Marc Donovan’s show jumping, the pair moved up from third to win the division.

The Challenge served exactly the intended purpose. “Dartmouth is right in between moving up from Training to Preliminary. So this was a great ‘where is he?’ test,” said Taylor. Taylor is coached by Emilee Libby with help from Katy Robinson.

Young professional Tommy Greengard is another fan of the Challenge format. “I always try to have a horse for the Preliminary Challenge at Woodside,” he said of the first manifestation of Kellerhouse’s innovative idea, which started in 2009 at the Horse Park at Woodside. Greengard’s enthusiasm was enhanced by finishing 2nd and 4th in the Training-Modified division, with Sandra Donnelley’s Belshazzar and Andrea Pfeiffer’s Leonardo Diterma, respectively.

“I love the Challenges. I love the Challenges. I love the Challenges,” he exclaimed. “To do a big course in a big ring like that: that’s a lot of atmosphere.” So much so that “Leo (Diterma) started jumping bigger and bigger!” Having entered the stadium standing second, Leo had a rail at fence 2, slipping to 4th on a 29 for the 5-year-old 2020 Young Event Horse star. Belshazzar has campaigned to 4* with his owner, and he’s on loan to Greengard to help him navigate the upper levels. The partnership is new, so they entered the Challenge to get to know each other. “I’ve only jumped him twice before and this was the first time I coursed him in the ring,” said Greengard of his partner in the reserve finish on a 27.3. “He was phenomenal.”

A mid-course rail dashed leader Sarah Ertl’s hopes for a win with Vive Le Balladeer. She and the 8-year-old Irish Sport Horse saw their 23.9 dressage score grow to a 27.9 third place finish. Still very respectable in the 29-pair field filled with talented amateurs and professionals on young horses. 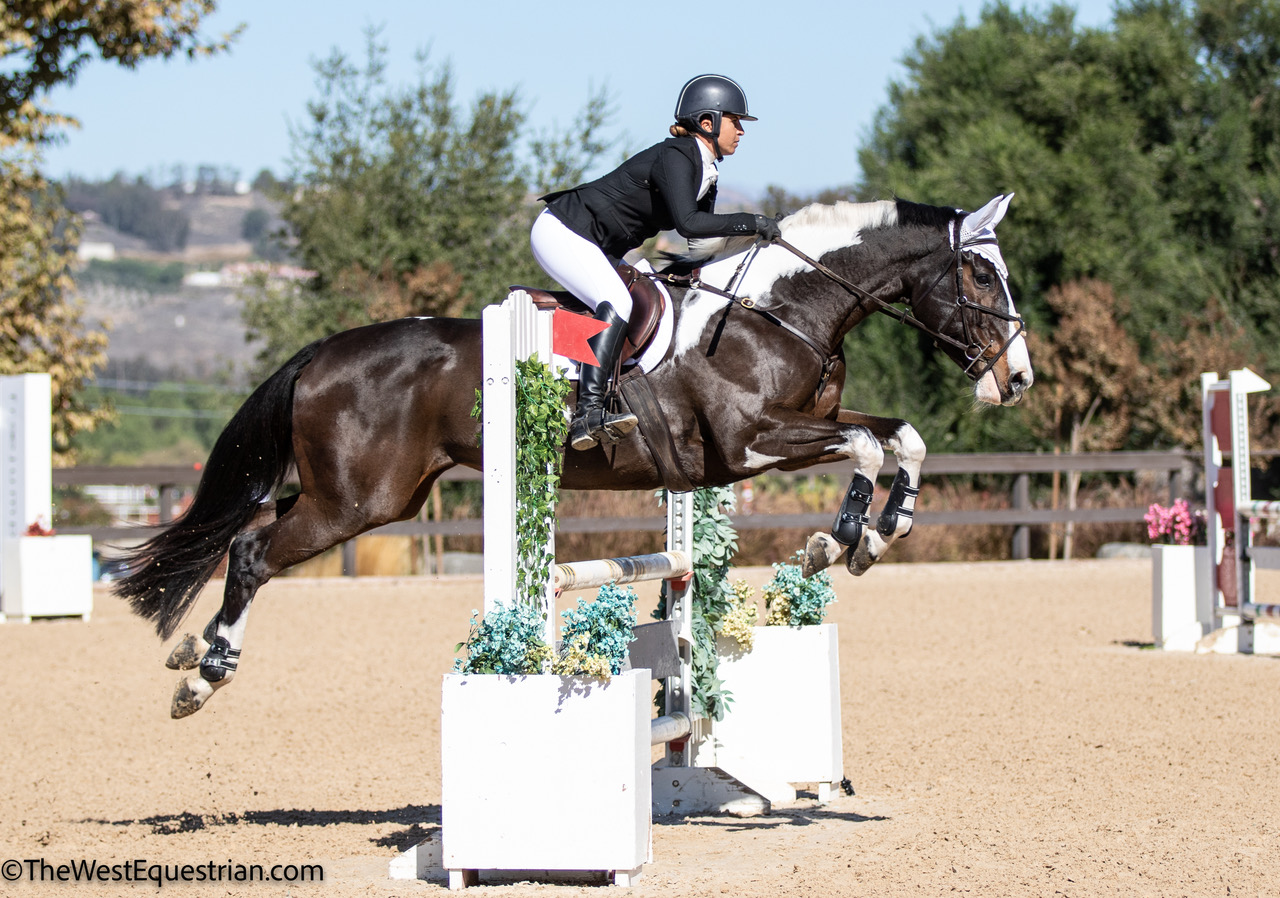 Southern California professional Olivia Loiacono-Putrino had a good day at the office. She won the division with Leslie Roberts’ striking Tobiano-colored Dutch Warmblood, Cabela, and her student Justine Kiosoglous and Record Year finished in reserve.

Cabela has Training level experience and made easy work of a course Loiacono-Putrino described as characteristically good Marc Donovan: “His courses are always good, with related lines that keep you on your toes and require the horse to react quickly.”

As a trainer, she loves the Challenge as a fun and constructive event for her students. “The organizers put a ton of work into all the levels this year. Spicing up the courses like they have makes it exciting for them.”

Her student Kiosoglous is looking to move up to Training and “this gave her good prep for that,” said Loiacono-Putrino, who also had students contesting the Novice-Beginner Novice Challenge. “The fact that it is a challenge and fun is great.” Trainer and student both finished on their dressage scores of 25.2 and 33.1, respectively.

Third place finishers Dana Carbajal and Maximus del la Tombe had .8 cross-country time penalties and one show jumping rail to end on a 36.7. 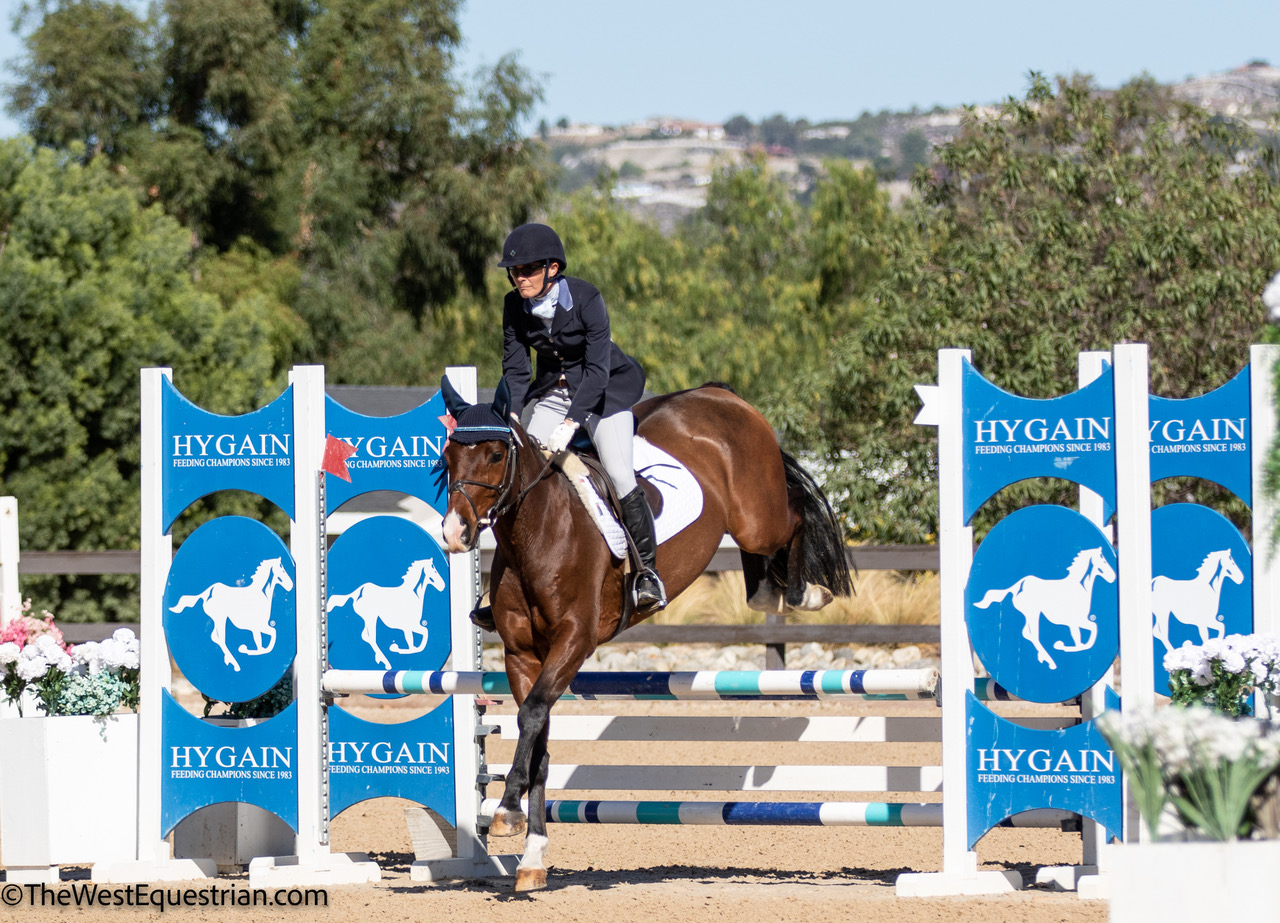 Oregon-based professional Devin Robel had not been to Galway Downs before and she ended her California tour on a high note by topping this division on her own 5-year-old Holsteiner, Gillou. “Our goal was to break a 20, and he did it,” said Gallou of sticking to their 19.8 dressage score over the three-day event’s three phases. That gave them a 5-point lead in the division, followed by double clear jumping phases to secure the victory.

Robel has had Gillou since he was a yearling and their dressage performance reflects a two-year break Robel took from eventing to focus on dressage. The United States Dressage Federation silver medalist said her whole weekend at Galway Downs was a win-win. “The food, the many rings, the views, the smooth running… Everything!”

Galway Downs-based professional Erin Kellerhouse and Gail Brackett’s 5-year-old Warmblood mare, Genesis, started and finished in second place on a 24.8. Amera Duran and her 6-year-old German Sport Horse Quinn also stuck on their dressage start, for third on a 26.4.

The Experience is Everything

The experience Robel and riders at all levels described throughout the weekend is exactly what Kellerhouse is going for with the Galway Downs venue and its competitions. From hand-pulling 60 acres of pesky “goat head” weeds off the cross-country course to arranging for first-class food in the VIP Pavilion, the improvements represented a major investment of time, thought and money. Although the payback is expected over many years, Kellerhouse said it’s “already very rewarding the support we’ve seen from top riders to those in the Novice-Beginner Novice Challenge and all the Horse Trials divisions. “We want to make it a better experience for everyone.”

Kellerhouse credits Ali and Francie Nilforushan with inspiring, sharing and guiding his big vision for Galway Downs, along with the support of property owner Ken Smith. The Nilforushans launched the Temecula Valley National Horse Show hunter/jumper series a few years ago to ground-breaking success. Their contributions started with improvements to footing and arenas and have progressed to amenities for exhibitors, their families, and fans.

“I learned a lot from Ali and his team and a lot of the things they’ve done and gotten recognition for have crossed over to our events, as has national awareness of our facility and its appeal. Ali and Ken (Smith) are like-minded individuals in respect to making it a great experience for everybody. It’s been super fun working with them.”

Clayton Fredericks’ second year of designing the international cross-country courses dovetails with landscape design and investments to bring the aesthetics on par with the athletic abilities demanded of horse and rider. Everything going on here — from the obvious improvements like all-weather footing and new arenas to the unseen infrastructure upgrades –serves the purpose of enhancing everybody’s experience, he explained. That’s already attracted notice. Having the United States Equestrian Federation stage the inaugural Adequan USEF Youth Eventing Team Challenge West Coast Finals is one of many examples of Galway Downs being viewed as a premiere competition site.

“And there’s more to come,” Kellerhouse concludes. “We’ve learned of our audience that, once you get them hooked on something new, like our amazing VIP Pavilion, they’ll realize ‘Wow, this is a great event!’ and keep coming back.”