This article was originally published on Eventing Nation 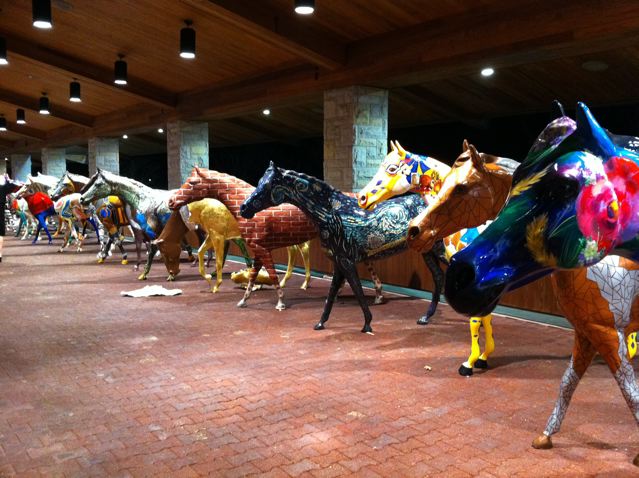 While most of Lexington was storming Kroger to buy supplies of milk, bread and canned goods in readiness for the snow that is now falling, the horsey and arts scene threw caution to the wind, donned their finest, and ventured out with the 82 fiberglass Horse Mania 2010 horses that were due to be auctioned off at the Keenland Sales Pavilion, just like the real thoroughbreds are each year. The auctioning of the fiberglass horses raise money for charities chosen by the horses’ sponsors, Lexarts, and the artists who decorate the horses. This year, there were also some fiberglass foals, which are currently on display at the Horse Park as part of the Southern Lights, and will be auctioned off in January.
Everyone at Keeneland had volunteered their time, including the dream team of auctioneers, callers and bid-spotters.  In his introduction, Keeneland President and CEO Nick Nicholson urged guests to “bid like you know there are lots of charities in Lexington depending on this.”   Sponsors chose the charity that proceeds from the sale of their horse would benefit, and after horses had been inspected in the back walking rings [see above picture], they were wheeled into the sales pavilion by the sponsors themselves, who were encouraged to show off their horse’s best side, and urge bidders to go higher. Turf Catering had already provided a delicious buffet for the VIP reception, including of course bourbon balls, and an open bar, and an exception was made to allow food and drinks into the sales pavilion for the night – eat, drink, bid higher!  Katherine wheeled her horse in…
Horses that sold needed to be removed from Keeneland by noon Saturday which might have proved more difficult than it sounds, as there’s a few inches of snow on the ground, more is falling steadily, and temperatures hover around freezing. 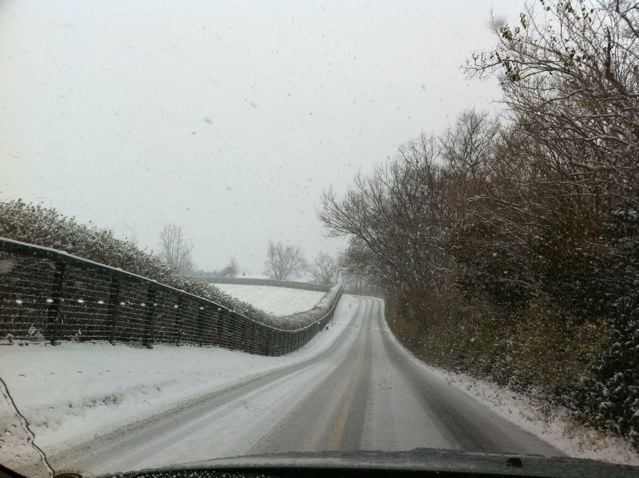 Seventeen horses that didn’t reach the reserve price of $3,700 will be up for sale on Ebay from 7th December for two weeks.
Many sponsors ended up buying back their horses:
All in all, $376,400 was raised; the highest price paid was $12,000 for Pegasus Flight: 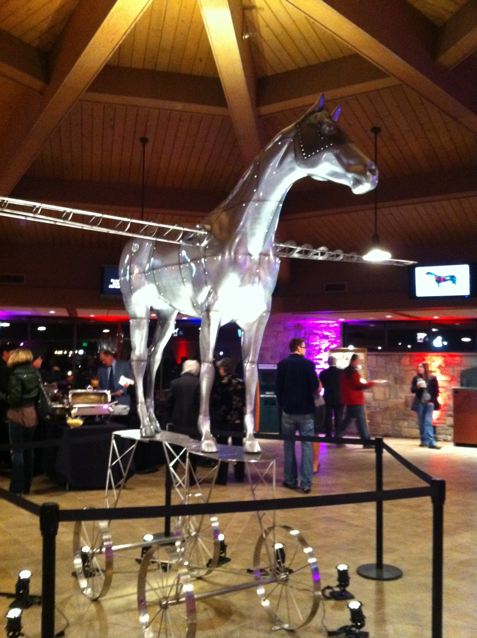 The average price raised for each horse auctioned off was $5,791.  It was a fun night for all to raise money for good causes. Trish in the press box was a hoot, and she looked beautiful dressed up in black tie.  She said she was loving having all the company after having worked the November Sales alone, and she was cracking us all up with her “announcements” – eg. “no scratches,” and “all the horses on sale tonight are ridgelings,” — very funny!
The best news of all is that some of the horses will be returned to the streets of Lexington.  The last Horse Mania auction was in 2000 and hopefully it won’t be ten years before a new crop comes back again. You can see the whole catalogue of the horses here:
LexArts, Horsemania 2010
Also, don’t forget to bid on one of the RNA’s as an unlikely stocking stuffer for John on Ebay from 7th December! Go Eventing!