While many people think Flagmount is an import stamp, the prefix actually comes from the sire Flagmount’s Freedom, owned by Janet Marden. With horses sired by “Flag” continuing to gain recognition as excellent competitors in the sport — particularly in Area V — Janet wrote a piece explaining how she got started in breeding. Many thanks to Janet for writing! 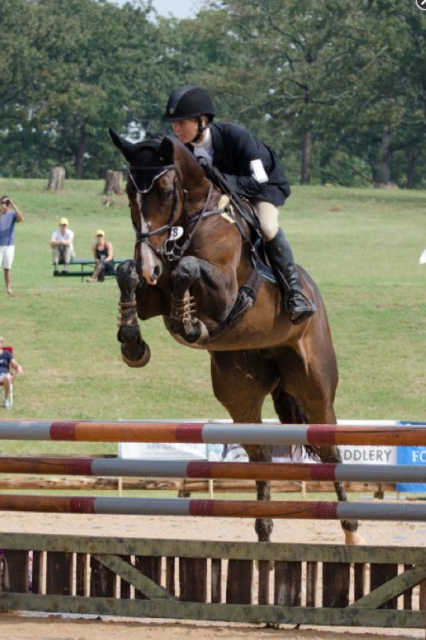 Back in 1983, my friend gave me her 7-year-old Paint horse that had done little of nothing and was turned out in a pasture with kicking chains on. His original name Yambeau was quickly traded in for Dancin’ Cowboy and together, although neither of us had ever evented before, we finished sixth at Rolex in 1991 when he was 17. It was through him that I saw the benefits of hybrid vigor. “Spot” was big boned, athletic and some strange cross between a Paint and an Irish Thoroughbred that we never have been able to confirm.

He was tough, though; the bones in his legs were like telephone poles, and riding him, I was able to travel and show on the East Coast, where I was so impressed by many of the Irish horses that I saw when importing was slowly gaining popularity. I knew I would never be able to afford to import a horse, so I wanted to use my vet degree and breed that kind of horse. I saw an article endorsing Irish studs, one of which was a grade-A show jumper, Flagmount King, who was grandsired by King of Diamonds, so I bought frozen semen from him and bred my OTTB mare, beginning a journey I am still on.

Flagmount’s Freedom (Flag) was the result of that first breeding. We had also bred two Thoroughbred foals and one other Irish Sport Horse out of a different sire that year. The bone and presence of Flag compared to the three other foals let me know right away that he would be special. Flag never went through that awkward downhill stage so many horses do when growing up; he always looked like a little statue. He was always very good natured; when he was a weanling, I would walk out to the pasture and pet him, letting my then 2-year-old daughter sit on his back. The combination of his strong conformation and wonderful temperament made the decision easy to keep him as a stallion. 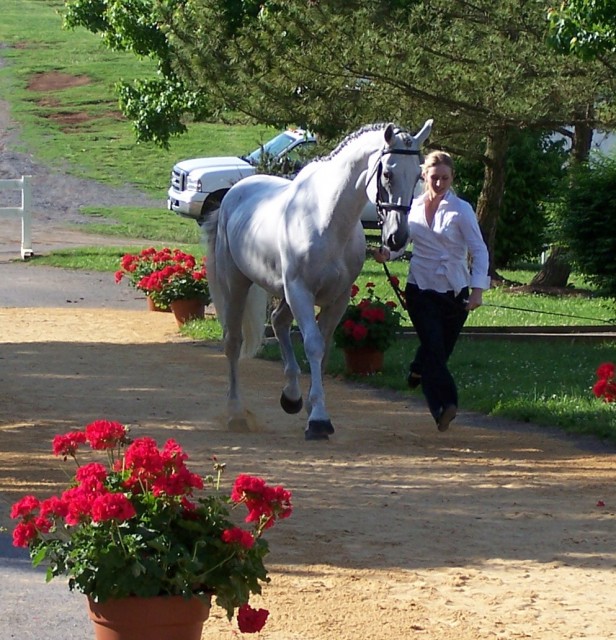 Natalie Lester, Janet’s daughter, and Flag jogging up at the Virginia Horse Park in her first one-star, where they finished fifth. Photo by Mike Stewart.

I had high hopes for Flag. I hoped he would be a big-time horse, one for that could take me as far as I wanted to go. It seemed at first that he would be a serious upper-level mount. He was tough, very sound, had a wonderful mind and scope to burn. But as we began to move up the levels, one thing started to become clear — he wasn’t going to have the gallop. I rode him in a clinic with Bruce Davidson, and he confirmed what I had begun to suspect, telling me that it would take “one more cross.”

He liked Flag though and bred a few mares to him, one of which is Flagmount’s Nightcap, now owned and ridden by Kelly Prather. Flag was 7 years old in 2004, after we completed Radnor’s long format CCI2* that year with no cross-country jumping faults, I retired him for the first time, wanting to focus on the up-and-coming young horses that he had sired, who I hoped would have that one missing component he lacked — the gallop.

I bred Flag back to OTTB mares, all of which were completely unproven. Investing in really classy mares was not something I could do, so I worked with what I had and waited to see how they would turn out. The second crop consisted of three horses, all of which I was very impressed with. Flagmount’s Heartbreaker, Flagmount’s Sterling Prince and a beautiful bay colt we never got the chance to name all showed tremendous potential. The bay colt was our favorite; he floated when he moved, but he had a freak accident as a yearling and was never sound afterward for eventing.

Flagmount’s Sterling Prince I sold, and he had just completed his first CIC3( star with no cross-country jumping penalties when we were devastated to hear about his tragic, fatal pasture accident. Heartbreaker was my favorite mare; she had just done her first two Intermediates before dying of a bone infection. For every horse that makes it to the upper levels, there’s so many who don’t and not even for lack of ability but the fragile thing that horses are, especially in the early stages of life. 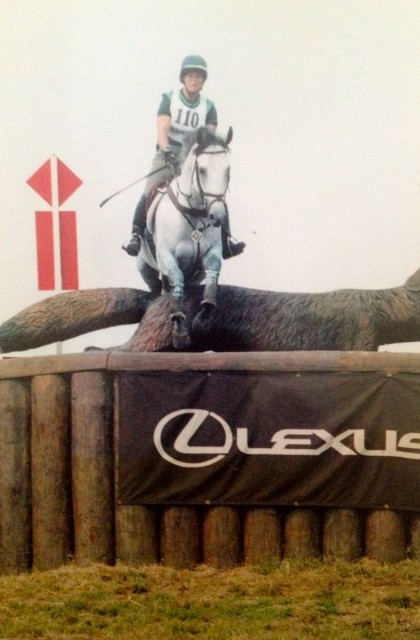 Flag as a 7 year old at Radnor with Janet in the irons. Photo by Brant Gamma.

I had a beautiful 3-year-old mare just a couple years ago by Flag who I had just broken when an inoperable tumor developed in her hock.  You can’t vet check what you breed, and seeing a healthy, good-looking foal nursing is a good start but no guarantee. Just a couple of weeks ago, my daughter and I left late to a show after staying up with a sick foal who after I performed surgery on to save still didn’t make it. It’s been hard being the vet, the breeder, the owner and the trainer.  Breeding is not for the faint of heart.

For all the hard times though, it’s been worth it. Only two horses by Flag have ever been campaigned by a professional —  Flagmount’s Sterling Prince and Flagmount’s Nightcap. The rest have all been ridden by amateurs. It’s been so much fun to see them start to come up and compete at the upper levels now. I’ve always thought it speaks a lot for Flag how many nice horses he has produced from very unproven mares and how rideable his progeny is to be almost all ridden by amateurs and yet still coming up the levels competitively. I was so proud to see Freedom’s Sweet Thunder place third in his first Intermediate with amateur Maggie McCarthy, with it being her first Intermediate as well.

The second generation, with the extra bit of hot blood, has had the missing piece Flag didn’t, and my own two mares, Flagmount’s Patronus Charm and Flagmount’s Amazing Grace, are what I’ve always wanted to ride. Flag himself still comes with me to all the shows; for the past three years, he has given my daughter great experience at the prelim level, her first season on him and at prelim being when she was only 15. I know she is safe on him. I look forward to seeing where the Flag babies go in the future and hope to watch his progeny at Rolex at one day.  As a breeder, there have been many lows, but the highs have been one of a kind.