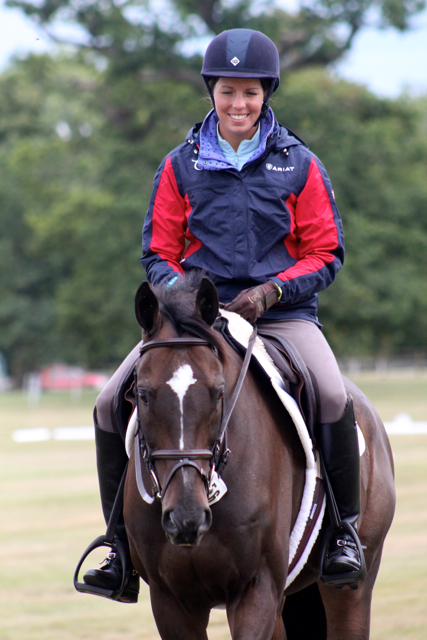 Meghan O’Donoghue takes Pirate out for a light school around the stunning grounds of Blenheim Palace.

Pirate (with Max Corcoran) and Team Rebecca’s Ben (with Kaitlin Spurlock) flew to Lieges and arrived in England on Saturday.  Meghan and Phillip Dutton flew out a day later, and David O’Connor joined them straight from Burghley on Sunday night to give them a school Monday and Tuesday before they left for Woodstock, Oxfordshire.  By all accounts they are both going extremely well, and they certainly look it.  David was working with Liz Halliday today, and will be on site tomorrow.  On the back of Burghley it’s so easy to take these amazing venues in England for granted, but Blenheim really is quite special, and the horse trials team have been working tirelessly to make it even more fabulous. They have a very cool website and active facebook page, definitely worth bookmarking for the week. The cross country is constantly being watered, there is ample signage, wonderful decorations and from what I can see of the course it looks incredibly impressive – both from the presentation point of view, and from scale of difficulty.

Also arriving this afternoon was Jessie Phoenix and her groom Amanda with Pavarotti from Maizey Manor; Jessie told me she thinks Blenheim might be her favourite event of all, and Amanda reminisced that when she came here in 2009 with Exponential and Exploring it was the first time she’d groomed at an FEI event, and the first time she’d ever been on a plane! How times have changed, she can add Burghley and the Olympics to countless other trips since!  Clark and Jess Montgomery came slightly later having stopped to gallop at Maizey en route; Loughan Glen looks absolutely fantastic and walked in to the stables as if he owned the entire estate, and I’m looking forward to seeing their Badminton horse Universe (Buzz) working here this week as he continues to prep for Pau CCI**** and takes advantage of David’s presence all week.  As I was leaving later this evening I did see Cindy Rawson’s lorry, but as yet no sign of Jules Stiller.

The briefing is at 1pm tomorrow and the First Horse Inspection at 4pm.  There is a great atmosphere in the North American barn aisle, and thanks to Max’s experience and organisation it was set up quickly and efficiently, and I presume thanks to Land Rover the entire squad, grooms included, have been kitted out in very nice USA/USEF Ariat coats (just as well as it’s decidedly chilly!).  The entire operation is running like a well-oiled machine so far, and the horses that just shipped over seem to be loving England – long may it last! I’ll be back with lots more from Camp Camerica (as Jessie suggested we name it!)  Thanks for visiting EN, and Go the Fidelity Blenheim International Horse Trials. 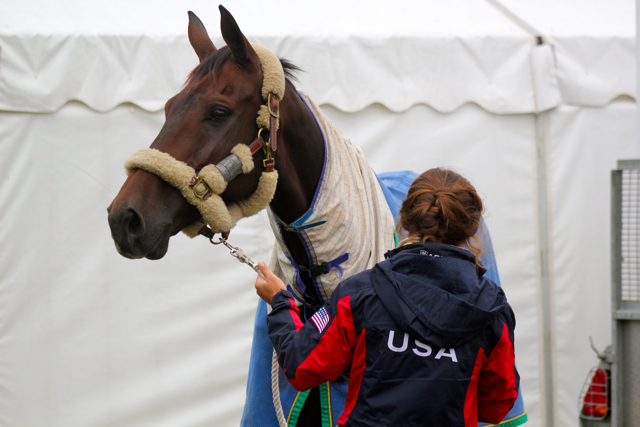