Every horse that we ride has a lot to teach us.  The longer we ride, the more we can pick out skills that specific horses have taught us along the way.  However, there is always one horse that starts it all for us.  The one that teaches about riding and makes us into the rider we are today.  This new series is going to tell the stories of the horses that started it all.  This week, I got to chat with Hillary Irwin about her first Intermediate horse, Clifden.  Photos are used with Hillary’s permission. 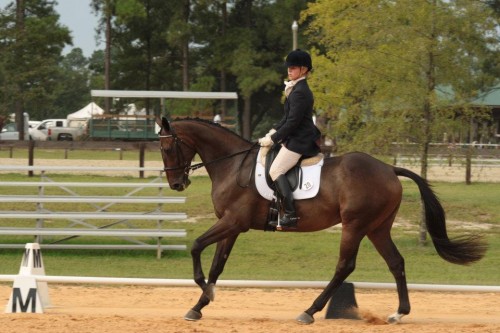 When Hillary Irwin was 15, she acquired a horse from her grandparents that would teach her a lot about eventing.  Clifden was a big, gorgeous bay TB bred by  her grandparents to race.  He needed to retire from the track, and Hillary needed another horse.  They were going to give him away, but after some begging by Hillary, Clif was supposed to be hers.  He got a good six months off in the field before he made the trip from Florida to NC.  Clif arrived and refused to get off the trailer for a full 25 minutes.  Once Hillary finally convinced him to unload, he proceeded to try to kick her during blanketing and refused to eat his feed. 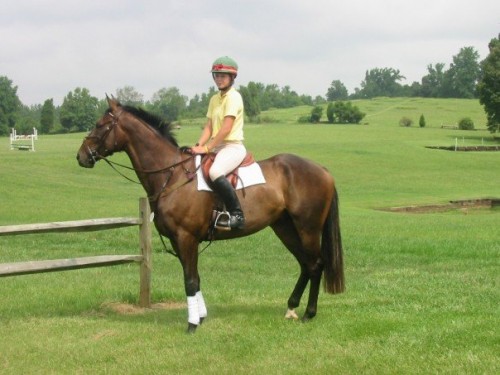 Clif and Hillary at their first show together

For the first month of being in work, Clif decided that he was not going forward until he was good and ready.  He would stand with his legs locked and refuse to move until it was his idea.  He definitely had his quirks.  For the first few months, he wouldn’t pick up the right lead without stepping over a pole first.  He would doing a flying change to the right, but he refused to pick it up from the trot.  Clif definitely had his quirks back then, but all of Hillary’s patience and hard work with him really paid off eventually.

Clif and Hillary did a lot of growing up together.  Not only did they event through the levels together, but Clif was there with her through all of her life changes: high school, college, working student positions, official riding positions, and taking the leap into her own business. 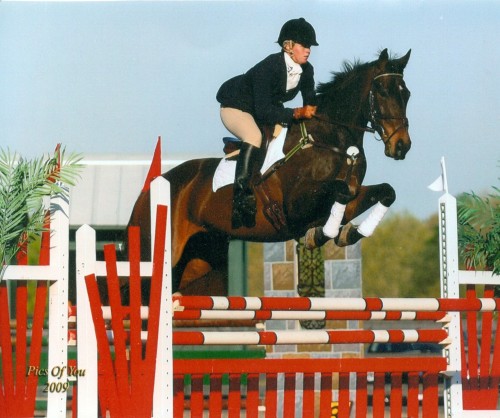 In 2008, Clif and Hillary made the move up to Preliminary.  They competed at that level together for awhile, and they had many top placings.  Hillary did an excellent job with Clif’s dressage training, and he often scored in the twenties and low thirties.  Finally, in October of 2009, they competed at MidSouth in the long format CCI* together.  Clif was phenomenal and ended up finishing 6th.  It was Hillary’s first time at this level.  Hillary and Clif made the move up to Intermediate and did pretty well.   Their last Intermediate together was at Five Points, and they brought home a 6th place in a big division.  Hillary was thrilled.

Unfortunately, after Five Points,  Hillary decided to retire Clif  to low level competition.  Though it was a tough decision and very hard to watch him go, he is now teaching a lovely adult amateur the ropes.

When asked what Clif taught her, Hillary said:

He taught me to be tough, (he did put both my arms in casts/slings the week of my high school graduation!), to re-think things, to take a breath, to relax, to semi-respectably sit the trot, how to properly do most canter work, and how to ride a horse that’s a bit on the odd side mentally.  He taught me to find a coach that believes in your horse, as well as you.  Looking back on all of it now, he taught me several major things; saying something louder doesn’t necessarily mean it will be heard more clearly.  He taught that effective communication is far more valuable.  He taught me to believe in myself a bit along the way.  He helped/let me ride with some of the best coaches in the world. While at Sharon White’s I was lucky enough to really ride fairly consistently with not only Sharon but also Jimmy Wofford and Linda Zang.  He taught me to make the most out an opportunity.  Most importantly, he taught me how to go XC.  I have doubts that no matter how long I ride, I will never sit on another horse as smart, careful, or with a better gallop again. 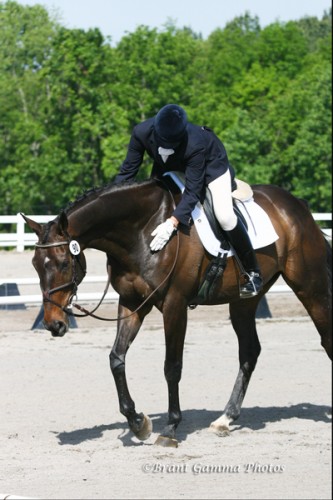 Clif and Hillary finish up a dressage test at VAHT

Clif was the horse that showed Hillary her calling in life.  After completing the CCI* with him, she knew that she wanted more.  Every horse that she sits on is always compared to the great Clifden.