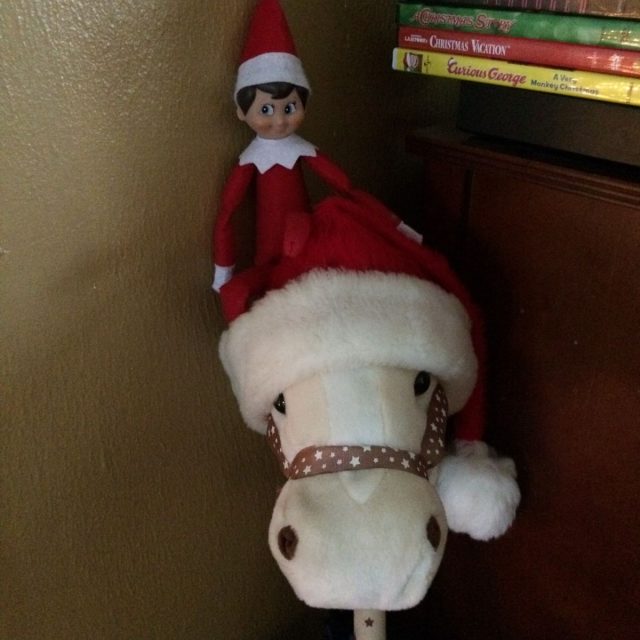 Our Elf on the Shelf Tony Stark fits right in with the rest of the family! Who knew Ironman liked ponies? Photo by Michelle Wadley.

Do you believe in Santa Claus? Or Elves on the Shelf? Or how about unicorns? Or the Tooth Fairy … or … yourself?

The holiday season is in full swing. It’s the most magical, wonderful time of the year. But it can also be the busiest, hardest, and for some, the most depressing time of the year. No matter what holiday you celebrate, it’s hard not to get caught up in all the craziness. The holidays bring with them a myriad of emotions from both ends of the spectrum, good, bad and everything in between. Your money, your job, your family, your friends, even what you eat and drink, name it, and it is in some way affected by the holidays. Each successive year adds to whatever collective thoughts and feelings we might already have about the holidays. And with each season comes a new influence on next year’s season. Sometimes even the things you believe in the most can come into question.

One year ago yesterday my husband’s father passed away. His cancer diagnosis came unexpectedly around Thanksgiving and within a couple of weeks he was gone. Everyone deals with grief in different, but still the same, ways. For my husband and his siblings it was hard to accept losing the very large, commanding personality of their dad, especially since it fell in the midst of the holiday season. This year, that loss has already begun to color our holidays and the way we celebrate. My husband misses his dad, and while he may not talk about it all the time (he is a man, after all) I sense his sorrow. But because my husband and I share a strong belief system that is grounded in our faith, it provides him with a great deal of comfort even in his loss. While he may be in pain, my husband has managed to hold onto the belief that he will one day see his dad again.

One day last week I was desperately trying to come up with a new and creative place for my son’s Elf on the Shelf to magically “reappear” before he got about of bed to get ready for school. If you don’t have kids and/or don’t know what an Elf on the Shelf is, count yourself lucky. The basic idea behind it is Santa Claus has scout elves that appear the day after Thanksgiving and hang out until Christmas. Their sole purpose is to report back to Santa about whether the children in their assigned household have been naughty or nice. Each night the elf magically leaves to return to the North Pole to tattle to Santa and returns the next morning to a different place in the house. Children are not allow to touch their elf, because it would take away his magic and put them on the naughty list. See where this is going? For the children involved, the elves are yet another magical part of Christmas. Their belief comes so easily and readily because of their innocence. Life hasn’t influenced their accepting faith yet. For the parents involved, well, it can get a bit tedious coming up with new locations, but it does do wonders in the behavior department. “Tony (our elf’s name, chosen by my son) is watching!”

So anyway, while I was trying yet again to come up with a new, creative location for Tony, a thought crossed my mind. My son is a highly intelligent six-year-old, who is almost impossible to con or manipulate. He’s an only child who has been around adults A LOT, so he clues into stuff pretty quickly. To be perfectly honest, I am amazed that he is still buying into the whole charade! But he is! He talks to Tony, worries about what Tony is going to tell Santa, looks for him first thing each morning, and has a fit if it someone accidentally touches that darned elf. He has bought into it hook, line and stinker; I mean, sinker. The point is HE BELIEVES!

Now, I’m sure by this point in the blog you’re wondering what in the heck this has to do with riding and being an eventer. Well, I do have a point, and the point is this: It can get really hard to hang onto your belief — your belief in yourself, your horse, your trainer, even your sport. When things get tough, or they aren’t going your way, it can get even harder to keep the faith and remain positive. Really, really hard. Life and circumstances are always going to color the lens through which we look at things. It can seem like you’re trapped in a kaleidoscope that is constantly shifting and being shaken up. It can affect the things we believe in, even those at the core of who we are.

I have had not just one, but several years in a row that have greatly affected my belief, belief in myself and in my horse, even in whether or not I should continue to ride. All things horse have always been my passion, my heart of hearts, but just when it seemed I might be about to get back on track with my riding, the kaleidoscope would get shaken, and I would find myself surrounded by all new shapes and all new colors, forced to start all over yet another time. But new beginnings are just part of life, and new shapes and colors might change our view, but they don’t have to change our belief. Belief is what makes us who we are. Just as my husband believes he will see his dad again, and just as my son believes Tony is headed back to the North Pole to report to Santa, I believe that my day will come. My horse is rock star through and through, and while we might not have had much chance to prove it yet, we will. That’s what I believe.