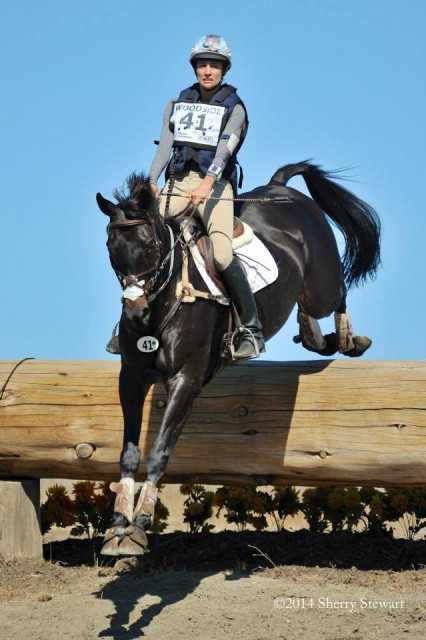 The wind blew the early morning fog out of the valley, and Ian Stark’s new cross country course got a great introduction with the Preliminary Challenge teams out on course first today at the Horse Park at Woodside in California.

Frankie and Chatwin had a great time out on the course. “Ian’s new course was a lot of fun,” she said. “It was great doing something different and seeing how he used the terrain. Chat really wanted to run in the gallop stretches and felt thrilled to be out again.”

Chatwin suffered an eye injury a couple months ago that had Frankie and her team giving Chat eye medication every six hours, but he hasn’t taken a wrong step this weekend.

Tamie and Beth Lendrum’s Under Wraps “ate up the course with ease” – and our eyes. Tamie remains in sixth on her second horse, Fleeceworks Royal, picking up just 1.2 time, “galloping around the course with ease.” Tamie is especially pleased with Royal, who was a YEH West Coast Champion last year and is hoping for great things for her. Tamie is happy to see how much her mare filled out and grew up this year. “It’s so rewarding and so fun watching the progression,” she said. 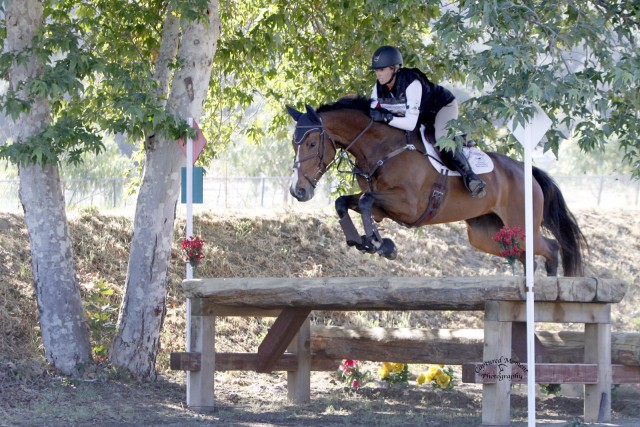 John Michael Durr and Ruth Bley’s Mighty Smart had a mandatory retirement at fence 5, the rolltop to drop, which was especially unfortunate after a lovely dressage test yesterday put them in ninth. The horse landed awkwardly off the bank and went to its knees and fell. Both horse and rider are fine.

Time was a significant factor, moving Bella Mowbray from tenth to 16th with only 9.2 time. That made room for Robyn Fisher and Carol Singh’s 6-year-old Betawave, who jumped from 20th to 10th, meaning that they will round out the top 10 in tonight’s stadium jumping Gala.

“I have been fortunate enough to have the ride on Leta since she was 3 years old. Her owner, Carol Singh, called me back in 2012 and we’ve been lucky enough to have a great working relationship with an amazing athlete,” Robyn said. “Leta is definitely an overachiever that doesn’t like making mistakes or being in trouble. I think that’s one of the reasons her dressage development has come a little slower than the jumping.”

Robyn and Leta entered the Preliminary Challenge in preparation for the CCI* at Rebecca Farms. “I wanted her exposed to more atmosphere in the dressage ring with the long court and show jump ring. We joke that the cross country courses are her playground because she really plays while she gallops around!”

Erin Kellerhouse had a spectacular morning riding double clear on both her entries to move into seventh with Bill’s Midnight Magic, owned by John Herich, and into ninth with Whitney Tucker’s Chavez Ravine.

In the Preliminary Rider division, the top six remained unchanged here as well. Tristen Hooks and Learn to Fly went double clear in cross country to enter stadium tonight with less than a rail in hand. In a really tight division, only 3.2 faults separate riders from second to tenth. This means any rail is worth some significant change and prizes in the $15,000 Challenge.

Ruth Bley riding Rodrigue Du Granit and Julie Flettner riding Ping Pong are both sitting on a score of 30.1 for second place, but Ruth finished just one second under the optimum time on cross country, so she will take the tie breaker if they have identical performances in show jumping.

Ian Stark’s course rewarded forward riding, and the new terrain didn’t appear to take too many combinations off balance. If it did, they handled it quite gracefully, with more double clear rides than not.

The riders seem thrilled with Robert Kellerhouse’s production of the event. As Tamie says laughing, “It’s an amazing class with so much loot!” The opportunity for younger horses in the Preliminary Challenge Horse division to experience the bigger atmosphere is also something all the riders have been thankful for. “This class is unlike anything else,” echoes Frankie. “It’s amazing that all these sponsors stand behind Robert Kellerhouse and the Horse Park at Woodside to make this all possible.” 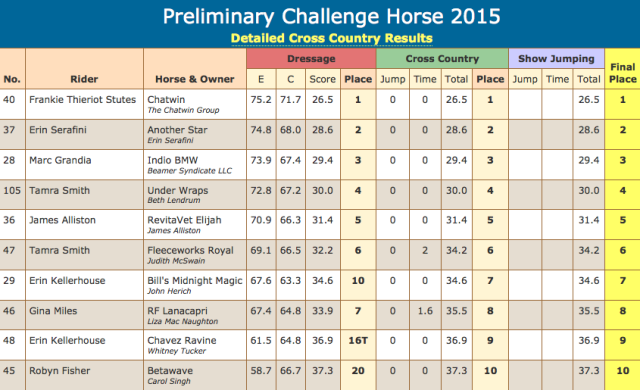 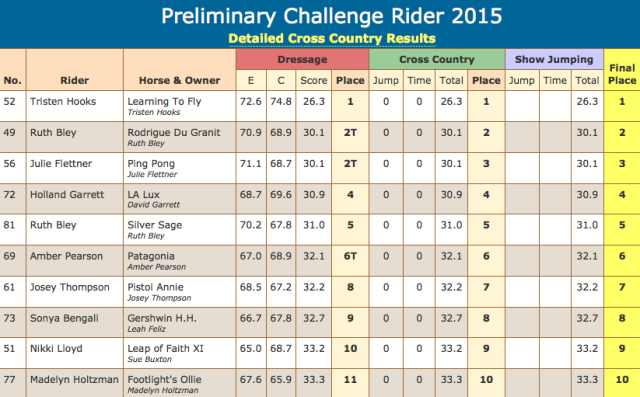