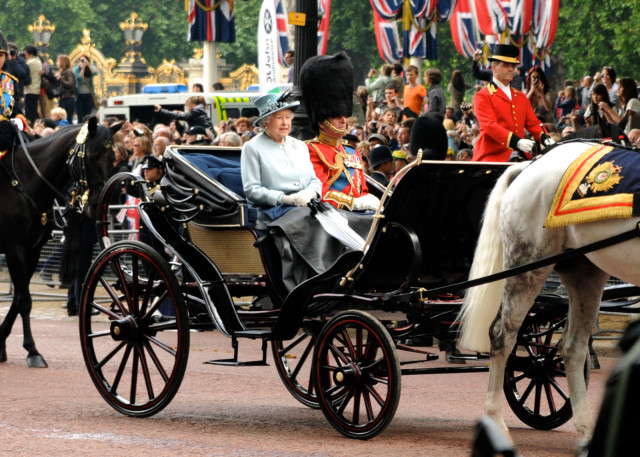 The Queen is coming! Photo by Ben Murray/Creative Commons.

Big news, ya’ll! The Queen herself has accepted an invitation to attend the final session of show jumping and present the medals for the FEI European Eventing Championships at Blair Castle on Sunday.

Horse & Hound confirmed the exciting news this afternoon via event director Alec Lochore, who said “it’s quite rare for The Queen to take the time to do something like this,” and everyone at Blair is extremely excited that she will be attending.

Just a guess at how everyone at Blair is feeling right now:

The action at Blair kicks off tomorrow with the first horse inspection at 3 p.m. local time, 10 a.m. EST. EN’s own Samantha Clark will be on the grounds all weekend providing live coverage, so be sure to keep it locked on EN for all the latest from #Blair2015.

Also be sure to follow EN’s good friend @EventingConsult for behind-the-scenes photos and videos from Blair, like this clip of Michael Jung zooming around on a Segway (#MikesBike) due to still being a bit lame from his fall at Burghley:

For all of those asking for updates on #MikesBike – still going stong. Sun is out again at #Blair2015 pic.twitter.com/zSTcfXTTLT

FEI TV will stream all four days of the competition starting Thursday (click here for the broadcast schedule), so you can watch live if you have a subscription. Subscriptions rates are $24.99 for 24-hour access, $14.99 per month or $79.99 for an annual subscription. Click here to subscribe.