This great OTTB success story appeared in CANTER PA's most recent newsletter, and the organization has kindly allowed EN to re-print it here. Do you own an opinionated OTTB and have your own success story to share? Tell us about your horse in the comments below. Learn more about CANTER PA at their website. 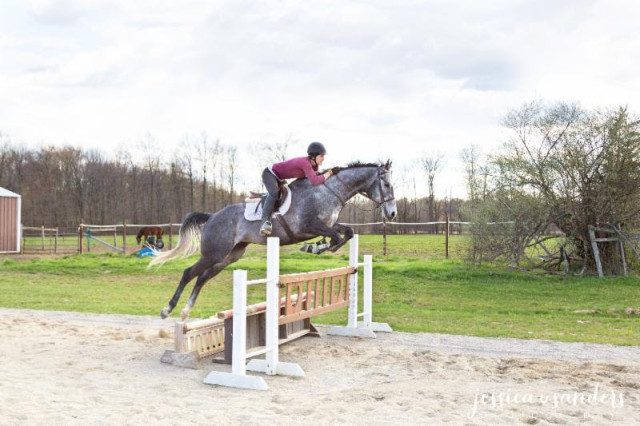 It was an odd decision to purchase the mischievous, unruly 5-year-old gelding that Kendra Richardson first saw listed on CANTER PA’s website. He lacked manners, a solid education and clearly had no regard for anyone handling him. But he was grey, athletic, had wonderful connections, and Kendra is an experienced horsewoman. What could go wrong?

With self-admitted strange decision-making skills, Kendra packed up an immature Rhinehold and set off for home. It took no time at all for Rhinehold’s lack of training to shine through. He pranced, pulled and twirled his way to the paddock — nearly running over Kendra in the process. He was no “instant prince” when he came off the track, but Kendra knew there was more to him than his childish ways.

“Training began with learning how to walk to the paddock in a straight line,” she says, “He was a total brat!”

Baby steps on the ground meant Kendra, and her husband Ben, would use the same technique when approaching under-saddle work. Though Rhinehold could now act somewhat behaved when being turned out, he was unable to do the same when in the ring.

Rhinehold’s athleticism and sharp brain meant he was easily distracted and hard to tire. “He doesn’t tire, ever, so my stamina became very good. He was a good boy in that he never reared or bucked, but he did this ‘dolphin’ move that, I’m not going to lie, was not fun to try and stay on,” Kendra said.

In fact, it took trickery, poles and a whole lot patience to even get Rhinehold through a flat session. The methods were limitless: serpentines, circles, change in direction and Rhinehold’s personal favorite — jumps (every few yards at that). After several small victories, life got in the way of Rhinehold’s training, and he sat out in the field through winter.

“He had obviously been practicing a lot at the ‘dolphin’ move because, let me tell you, he had perfected it by March!” Kendra said.

It appeared that Rhinehold regressed in his month without work, but it was just how he expressed boredom. Like many Thoroughbreds, Rhinehold possesses a sharp, fearless mind that craves challenges. Kendra knew he would not be an easy retraining project, but she also knew he would be great at something — she just had to unlock it.

“We basically tricked him into learning and liking flatwork. Little by little, he got better and easier, and I could go longer without entertaining. We started to do lots of grid work to shorten up his stride and teach him that he actually had a hind end to use over the jumps,” Kendra said.

It was during this time that Kendra made the pivotal decision to take Rhinehold out cross country. “I had this feeling that the ring is not where this horse was going to excel,” said said. “He is very brave — nothing bothers him, and he has a great sense of self preservation.”

While Rhinhold’s flair for dramatics nearly spoiled their first Beginner Novice event, the pair persevered and ended with an enjoyable cross country round.

After their dressage test pointed out the weaknesses on the flat, the two went back home and continued their schooling. Shortly after, Rhinehold changed — as if a light bulb went off and he suddenly knew his job. “I don’t know what it was, but my opinionated, bratty dolphin turned into a willing, amazing, incredibly fun and easy — yes, I said easy — valiant steed,” Kendra said.

Rhinehold finished fifth in his following event and is now gearing up for the highly anticipated Retired Racehorse Project Thoroughbred Makeover, where he and Kendra will proudly represent CANTER PA next month.

Kendra views the Thoroughbred Makeover as a stage to display Rhinehold’s transformation. His tough, hard-fought journey from stubborn, and sometimes dangerous, to confident and thriving is a tale Kendra is eager to share.

“I want people to know that he was NOT easy,” she says, “I feel more people need to understand how difficult the beginning can be.”

Kendra emphasizes that with patience, experience and the appropriate setting, even the most opinionated horse can thrive.