Blenheim Palace International Horse Trials ran this past weekend in Oxfordshire, England, with a competitive 4*L and 4*S. With the recent passing of Queen Elizabeth II, England, and Blenheim Palace International Horse Trials are working to honor her memory and legacy. United States rider Kimmy Cecere remarked on the efforts taken by Blenheim to honor the Queen, with moments of silence each day, honorable mentions, and black bands for competitors to wear during each phase to express how the importance of this moment for the community.

In the 4*L, Germany’s Malin Hansen-Hotopp maintained the lead she established in the dressage to win her first British event. In the 4*S, Britain’s Piggy March took home the win, just two weeks after her victorious weekend in the 5* at Burghley. 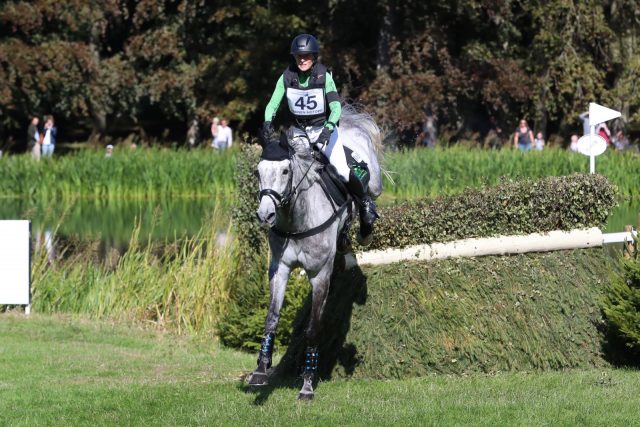 While you can rewatch the live streams from this past weekend, we caught up with a few of the 4*L riders to hear about the weekend first hand… what better way to gain insight into the course and atmosphere?

U.S. rider Gillian Beale King has been based in Ireland since the spring of 2021, riding for Richard and Tanja Ames of Belline Estate. This past weekend at Blenheim, we saw her listed with three separate rides: Rebeliant in his 4*L debut, and RCA Royal Summer and Derena Super Star in the 4*S.

“This was my first time competing at a British event, and it did not disappoint… I was expecting stiff competition, which was there! It was surreal to be riding in front of the palace, with some of the best riders in the world.” Being at such a beautiful, iconic event attracts a certain type of atmosphere, which Gillian immediately noticed: “Dressage especially had quite the atmosphere, with tents, stands, and crowds to look at. It all adds to it.” 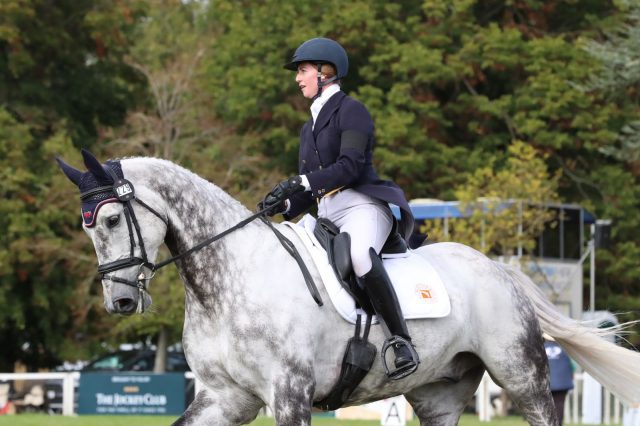 Moving into the cross country, the courses were walking well, with a variety of options a horse and riders combination could take. Gillian noted multiple times the choices that the riders could make dependent on the type of horse you had, or the round you wanted. “The questions were just phenomenal… [the questions] just kept coming. You had to ride your plan and know your horse. The course rode really well, and [course designer David Evans] played the land to his advantage, with strategic placement of fences.”

“Unfortunately, [Rebeliant] was just not having the best day, energy wise – I ended up pulling up around fence 19. I grew up with a focus to be not just a rider, but a horsewoman. You always put your horse first, and the best thing to save him for another day,” Gillian reflected.

Despite an early end to the weekend in the 4*L, Gillian had plenty of great moments this weekend, just one of which being achieving the best ever dressage score by a U.S. rider in the history of Blenheim 8/9 Year-Olds with Derena Super Star. Gillian was thrilled with how good her horses felt, how eye opening it was to ride against the best riders in the world, and for the educational opportunities to collaborate with other competitors in tackling the courses and challenges in front of them.

“I’m incentivized by doing better – this weekend showed me I on the right path. After focusing on Show Jumping for the past ten years, I’ve only been back to Eventing for 18 months. This weekend showed that the hard work paying off, and that we have a great team.”

While reflecting on this weekend, Gillian was sure to recognize the tragedy and heartbreak in Samantha Lissington’s fall with Ricker Ridge Ricochet, which resulted in a horse fatality and rider hospitalization. “Times like these are such a strong reminder to not take the opportunity to do what we do for granted. The journey that we are on makes it so we never stop learning, because life never stops teaching. We are so lucky to ride, train, and enjoy our partnerships,” Gillian states. Our thoughts are with Samantha’s team and Ricker Ridge Ricochet’s connections.

Canadian rider Jamie Kellock flew to England the Tuesday before Blenheim to compete in the 4*L in her first overseas event. While this was Jamie’s riding debut abroad, she is no stranger to overseas competition itself, working previously as a groom for Jessica Phoenix, grooming for Jessica at the Pan American and Olympic Games.

“My past experience flying with the horses, going to international events – I’m super thankful for that, as I was able to take things in stride this time around, and really enjoy every second of the process,” Jamie said.

“The overall atmosphere really felt like a big time event, with the trade fair, spectators, and of course the breathtaking view of the palace. The first time I rode and hacked around the grounds, I took so many pictures!” Jamie laughed.

“Not only [were the grounds] stunning, but the cross country course as well. Although the course looked quite big the first time I walked, the second time around I only felt excitement – the course suited my horse, with a lot of galloping.” With an order of go draw right in the middle of the pack, Jamie felt lucky, as she was able to watch many riders before her go successfully. “So many were having a great ride. The combinations were riding well, and watching how things were working out, I was able to determine where I’d have to work hard.”

“I came into Blenheim for educational purposes for the future. The whole experience, going over and competing against the best, watching how everyone works their horses, was super educational. I know I need to continue to put myself in those situations so I can continue developing as a rider and to hopefully represent Canada one day.”

“I do need to thank my coach, my family, and everyone at home… Everyone who took time to say good luck, or donated to the GoFundMe. It is such a significant endeavor to undertake, and was incredibly humbling to have so much support.” 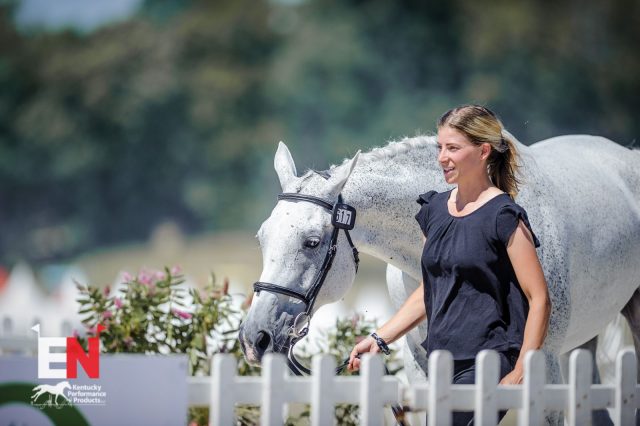 “Blenheim [had the biggest] crowds [Landmarks] Monaco and I have ever seen. It was a little overwhelming with hoards of people on course, but was amazing to hear the big applause after a jump on cross country. It was all very encouraging.”

Kimmy has been based in the UK since March, and recognized the challenges and the effort put into this event to have it run smoothly and successfully. “It’s been a dry summer here, which has been tough on the events. But the crew at Blenheim did an amazing job making sure the footing was perfect, from measuring the depth of the footing, to aerating, to daily course maintenance,” Kimmy reflected. “It was a beautiful course, and was so well decorated, with amazing views of the palace.”

“There was a little bit of the same feeling of Kentucky – [going into the dressage] chute, it opens to a big ring, with big crowds, and big screens – it caused some horses to tense up. Monaco definitely was a bit tense with all of that, which hindered some of the trot work. I was pleased we had no major mistakes, and was overall very happy with him. Sometimes when they get tense like that, you don’t know how it will come out in the test.”

Moving into cross country, despite the 40 jump penalties picked up, Kimmy was ecstatic with Monaco’s performance. “Monaco was unbelievable! He’s never been that keen, taking me to the jumps so well. I was excited too… [I just had] two big mistakes – Jumping into fence 5, there was then 4-5 strides to the next option. Going to the B element, I pulled a bit too hard and ran past the corner. Later in the course, right around minute 6, Monaco was still pulling, and we went into the water a bit to big, [causing another penalty]. We came back with a better canter, and it rode well.”

“Despite a long course, Monaco was a wild man on Sunday! He was very excited in the show jumping, a phase we’ve previously struggled in. I knew I had to ride through it aggressively, and came in well under the time. I am so proud of him in our first Blenheim experience.”

With Kimmy spending a significant time in England leading up to the event, I was curious of the reflections she had on her time abroad – and there were plenty! A key takeaway, which helped her during her time at Blenheim, and reflect on the growth she’d like to make next, has to do with mindset: “Being over in England, I’ve been surprised by how little dwelling there is on the small detailed mistakes. [They’re] much more ‘pick your head up, you know what you did wrong, let’s move onto the next thing’. The mentality is to not overanalyze, but to move on, and keep trying. That’s changed my mentality to analyze my rides in a healthier way, [instead of] beating myself up over it. I journal now, and write a recap of it all – how I want to improve or get better.”

As Kimmy looks to the future and the growth she wants to make, it is first important to recognize and appreciate the opportunities and people that have supported her throughout her journey. “Without Ms. Mars, and without the Wilton Fair Grant, I wouldn’t be here,” Kimmy expressed with gratitude.

U.S.-based Valerie and her 5* partner Favian have spent the last few months based with William Fox-Pitt in preparation for Blenheim. Valerie made it clear how “inspiring it was to have come to a competition that the best of the best look forward to attending. Unreal that even with the World Championships this weekend, over 200 incredibly talented horses ran! They set the bar high!”

“It was a fantastic weekend of sport. Perfect weather and footing, even though they had [had to prep] the track for 3 weeks… you could tell [the amount of work they put in]!” Valerie stated. “[It was] so humbling to be a part of a competition with so many entries, all of them with their eye on the prize. [Blenheim] is such a destination – it was an honor to be there, and experience several big changes in the course this year,” Valerie reflected. “The turning question on the end was certainly the talk of the competition… I’m not sure anyone said it was their highlight of the course, but [a job] well done to just get it done… on any sort of stride possible!”

In addition to an impressive weekend of sport, Valerie emphasized that “it was momentous being a part of the moments of silence for Her Majesty.”