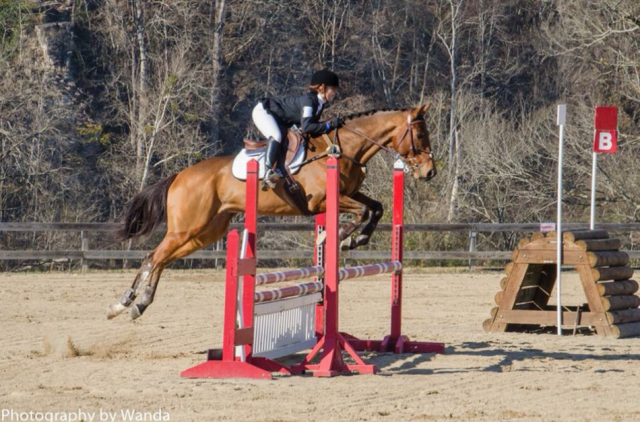 Photo courtesy of Photography by Wanda.

You buy a horse, you imagine your future together, all the things you’re going to accomplish and all the memories you’re going to make. You spend all your extra time with them, buy them blankets, halters and everything else with their name on them. You start living your dream with that horse.

You compete, play, do photoshoots and somewhere along the line you fall in love. You can’t imagine your life without that horse or how you ever lived before they came into your life. Time flies by, years of love and care go into this horse that you love with your soul. Then one day, they’re just gone.

The hole left in your life is indescribably large. You swear nothing has ever hurt so badly, but at the same time they finally aren’t hurting. Moving on seems impossible. How are you supposed to be able to let go?

Do people think you can just forget everything? Why does everyone think this is so easy? You just want everyone to give you time to grieve, a piece of your heart is gone. Don’t you at least deserve some time and space?

I recently had to put down a horse that once upon a time was going to be my upper level horse. Ironically enough, when I first started my horse search, this was the first horse I was supposed to look at but he had been shipped to New York on a trial. So I skipped him, and looked at a ton of other horses. Then one day, we got a call saying the horse was back and they asked if I was still interested.

Ramsey was 5 years old when he came to my farm and never left. He came off the trailer so lathered in sweat, it looked like he had just been soaped up for a bath. Poor thing was so nervous, I was sure this was going to be a disaster.

I don’t know what we were thinking, honestly. I was only 14, this wasn’t the horse I needed at the time. But, we fit together and I was hooked.

This huge bay Thoroughbred, that never raced a day in his life, was the most athletic horse I had ever sat on. He wasn’t extremely fancy, he probably could have been but he always had an extreme amount of energy pinned up inside of him. That translated into choppiness and lots of broncing around.

It was evident that we belonged to eachother. He hated most other people, especially my mom. He would charge her, bite her, one day he hit her in the back with his front leg while she was trying to clip him.

He always hated blankets too. When anyone would try to buckle the hind leg straps he would threaten to kick. He always let me do it though. Don’t get me started on baths! He was so bad for baths that my mom repeatedly tied him to the fence and stood a good 20 feet away to spray him off. He was an angry little thing, unless it was me.

He loved me, I always knew that. That’s why I wanted to be there when we put him down. This horse looked to me for everything, he was my best friend and nothing could change that. Not the rearing, the bucking or the disappointing shows.

When he got hurt two years ago, all my dreams were crushed. We were told that he wouldn’t be an upper level horse, and due to his conformation he probably would keep tearing the ligament thus never being completely sound for extended periods of time.

They advised us to put him down then, to make it easier for all of us. That way he wouldn’t have to live uncomfortably and he wouldn’t put anyone else in danger with his anger issues. But I had hope. I held out hope for as long as I could but everytime he seemed sound, it wouldn’t last long enough to keep him in work and he was so naughty.

We put him down because of all of these things. Because when we tried to trailer him to the new farm he almost broke his neck and punctured his hind leg. Because McCoys Trademark was a one person horse and he turned on me that day.

I’ve cried. More tears than I’ve ever shed and I continue to cry two weeks later. I feel like I did the right thing, I made the right choice with his best interest at heart. I feel him everywhere, now he can come to all the shows he was missing out on.

I feel him while I hack my little pony around the new farm, while I’m watching cross country at Midsouth. He’s probably running around the courses like the machine he was. Man do I miss him like crazy too.

He taught me so much about myself, about love and now loss. I’ll carry him with me forever. I hope you’re loving it up there big guy, you are the stars in my night sky.

I love you, Ramsey.