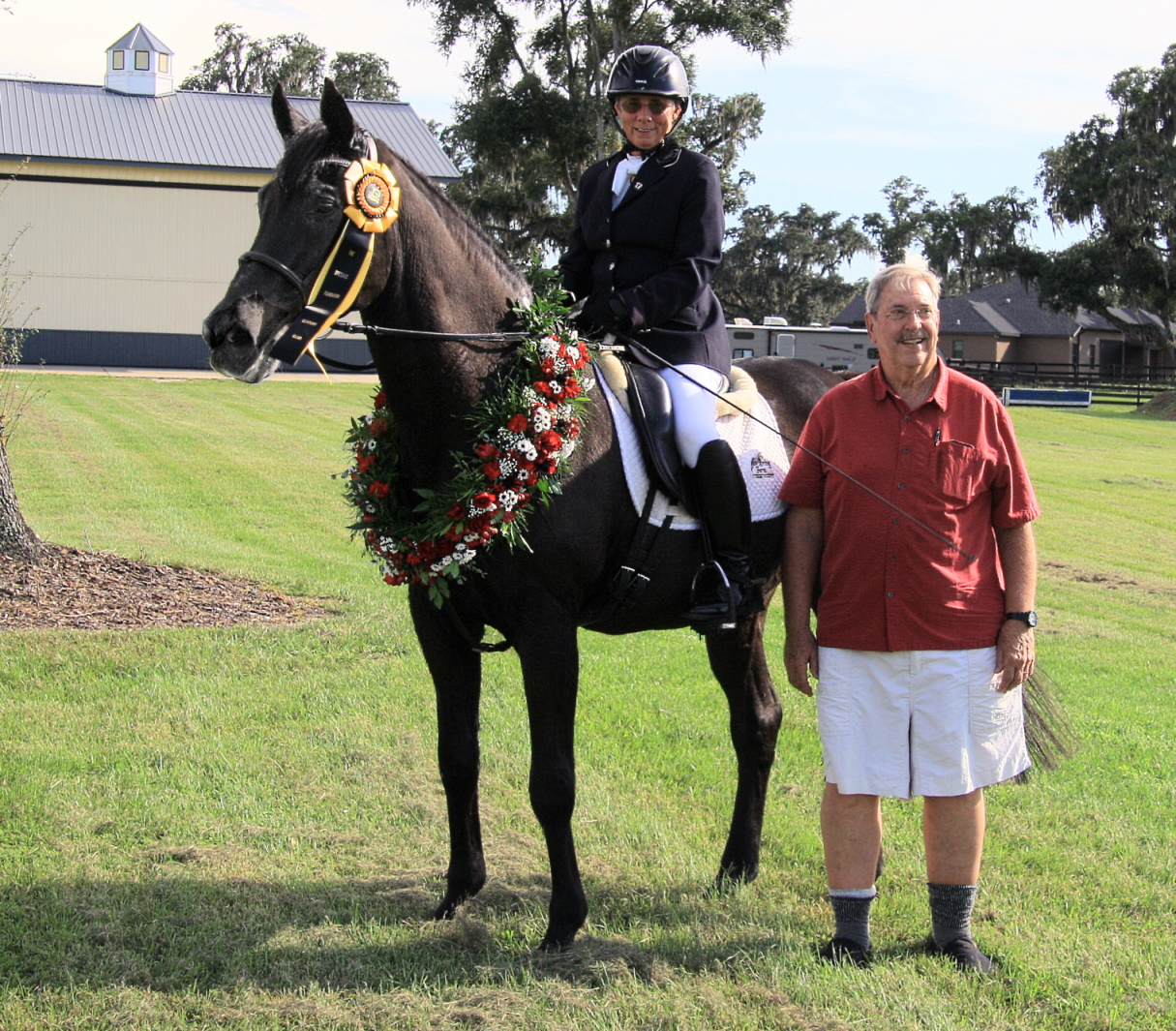 Cheryl and Windfall strike a pose with Tim Holekamp. Photo by Amanda Chance.

Not only was the Trakehner stallion Pan-Am double gold medalist and Olympian under the saddle of U.S. rider Darren Chiacchia, Windfall was also a Grand Prix level dressage horse and has enjoyed a successful breeding career, siring two Olympic eventers in Boyd Martin’s Tsetserleg and Doug Payne’s Vandiver.

While that may seem like more than enough accolades for any horse, last week he and Cheryl Holekamp added yet another to the list: The Dressage Foundation’s Century Club.

While Windfall’s resume looks impressive, so too is Cheryl’s. She is a USDF Gold Medalist and “S” judge, and together with her husband Tim has been a long-time Trakehner breeder. They are also both staunch supporters of eventing and the USEA Young Event Horse program, co-sponsoring the Holekamp-Turner YEH Lion d’Angers Grant for the FEI World Young Horse Breeding Championships in France. The Holekamps were also named Trakehner Breeders of the Year in 2019 by the German Trakehner Association — the first time American breeders had ever earned the title, an honor credited in large part to Windfall.

On what was a beautiful (albeit a bit warm) afternoon in Ocala, Florida, 30-year-old Windfall trotted up centerline one more time with Cheryl — on her 70th birthday, no less! In order to be eligible for the Century Club the horse and rider’s combined ages must equal at least 100, and they must perform a test at any level, scored by a dressage judge or professional. Since the Holekamps do nothing by halves, especially when it comes to Windfall, they had the ride panel-judged by “S” judges Natalie Lamping and Jodi Ely.

My first impression upon arriving for the event was that Windfall looks absolutely incredible. He’s still moving well and is in fantastic condition, a feat for any 30-year-old horse, but particularly one who had a lengthy career at the upper levels of eventing followed by a busy FEI-dressage and breeding career.

As Cheryl and Windfall entered the arena you could see that Windfall knew exactly what type of business was at hand, and being the seasoned professional and showman that he (still) is, he puffed up and added a bit more spring to his step. He seems to still enjoy his work, something he was known for throughout his eventing and dressage careers. 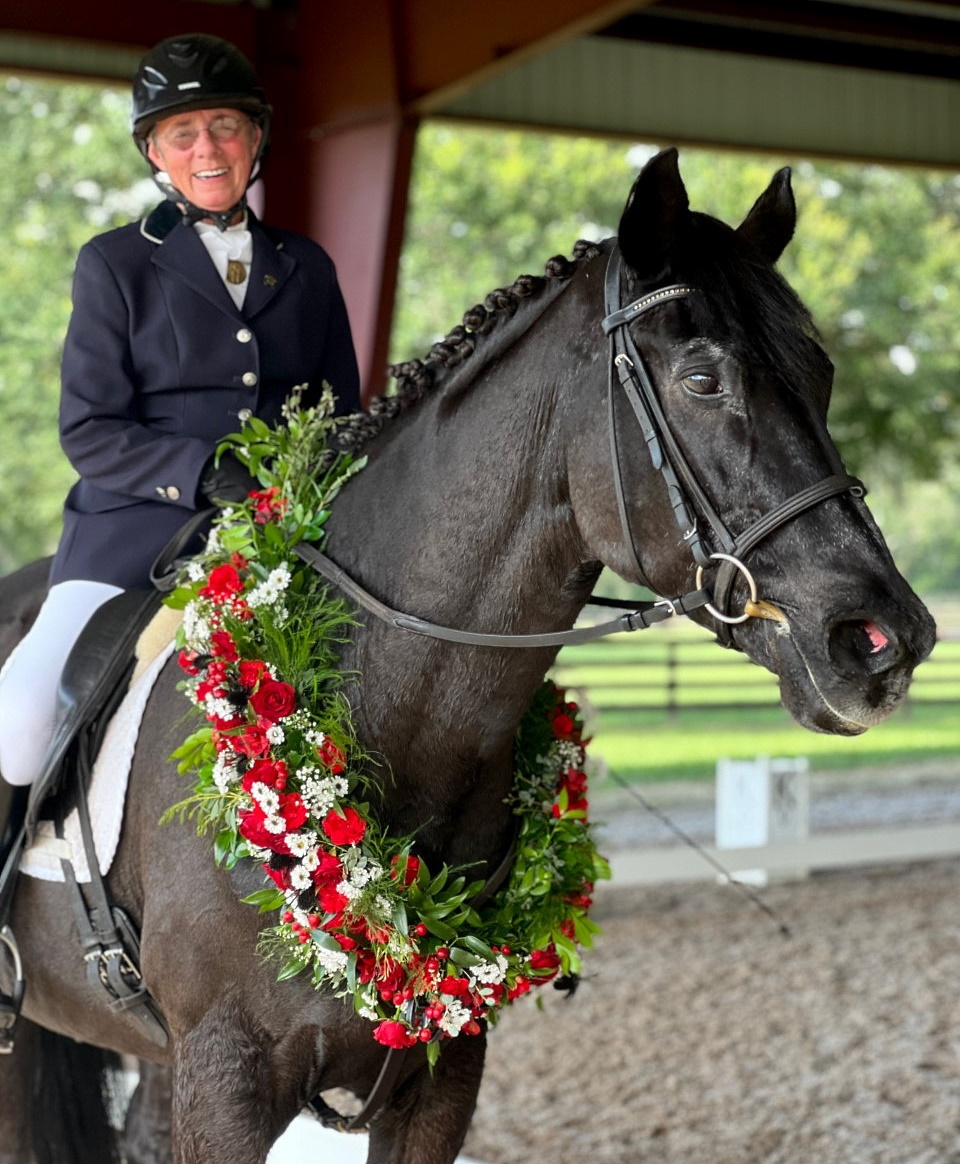 30 and still rocking it! Windfall and Cheryl Holekamp at their Century Ride. Photo by Amanda Chance.

The ride was lovely, with the pair exhibiting certainly more than enough proficiency and harmony to earn their way into the Century Club. The judges agreed, and after their final halt Windfall and Cheryl passaged and piaffed their way around the arena one last time to the applause of their friends, family, and fans before receiving their official Century Club accolades.

Cheryl and Windfall completed their ride at Autumn Schweiss’ picturesque Ocala farm, which is across the street from the Holekamps, where Windfall offspring could be seen in the distance galloping across the lush green fields as their sire and Cheryl made yet more history.

The occasion felt significant — as it should — and it’s safe to say that everyone in attendance was moved and inspired to be part of such a special occasion. While this was not the first time Cheryl and Windfall have trotted up centerline together – after he retired from his eventing career she rode him through Grand Prix level dressage – it was most likely their last. In a moment that could have felt bittersweet, it instead felt like a celebration, one worthy of a horse that has accomplished as much as Windfall with the owners that have loved him so dearly. 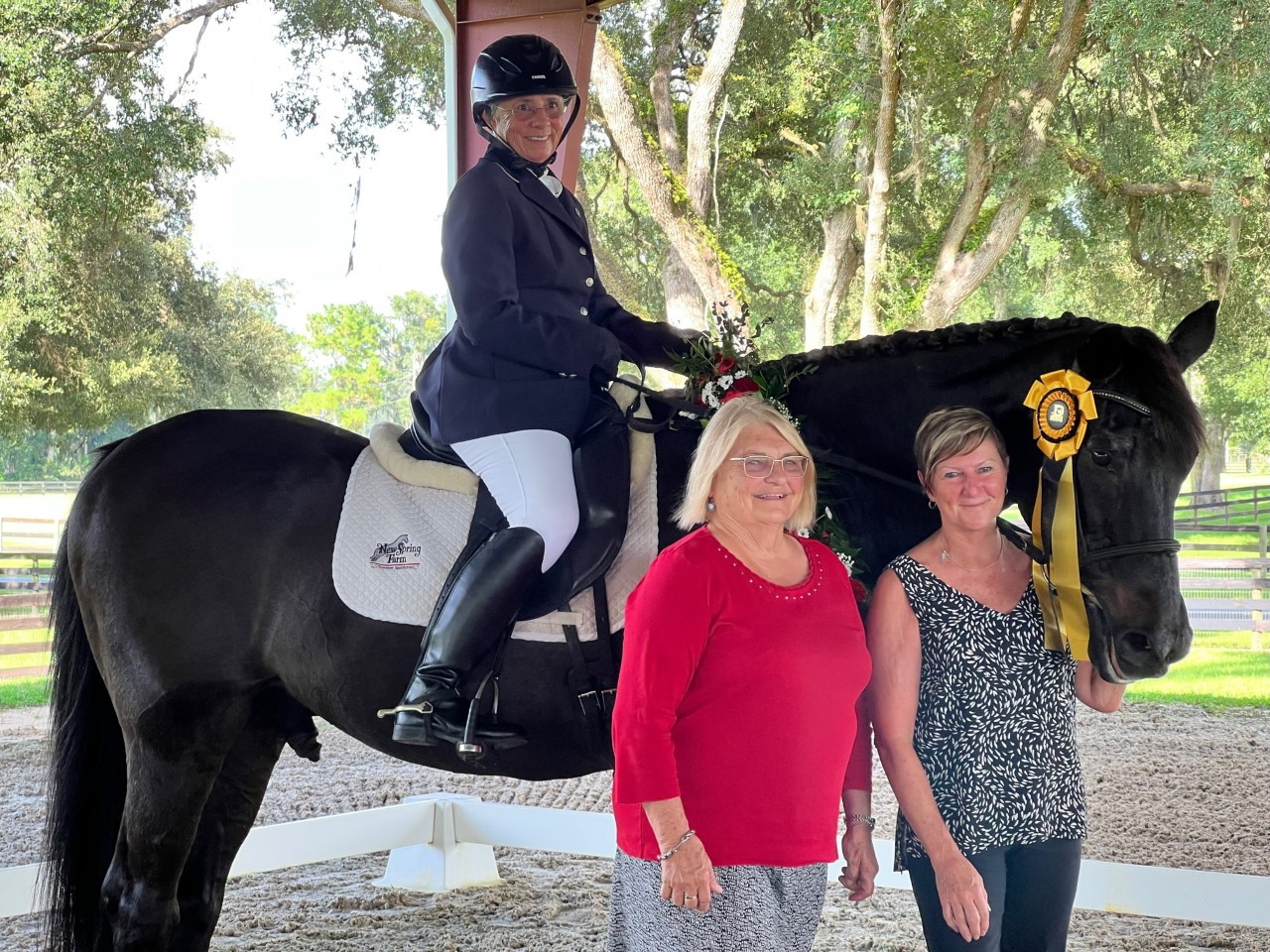 When asked what he was like to ride these days, in his golden years, Cheryl exclaimed, “He’s always been sassy and he’s still sassy!” While Windfall has been enjoying his retirement for the past several years, he was also more than happy to come back to work. Earlier in the year when the Holekamps first decided to plan the Century Club ride, the first step was to determine if Windfall could do it. He answered that question quite clearly when, upon putting him in the round pen to watch him move, he showed just how proficient he still was at performing some very impressive airs above the ground.

Windfall spent a few weeks in the round pen until his excitement at being brought out of retirement settled down a bit, and then Cheryl started riding him a few days a week, with mostly short rides of only about 15 minutes. When she was out of town for various judging obligations Windfall also went on road hacks, one of his favorite activities. He often greets Cheryl in the barn with his head hanging over his stall door, ears pricked, interested to find out what’s happening that day. 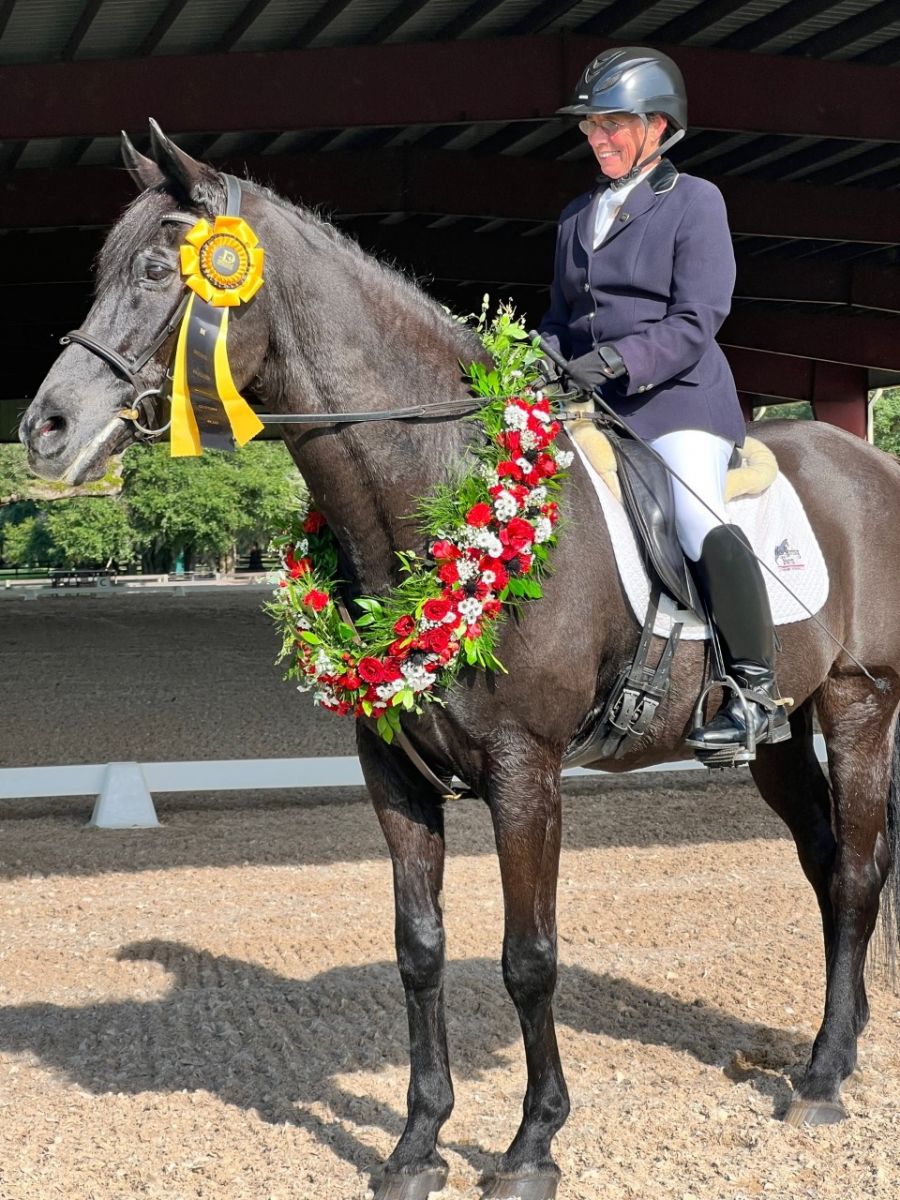 Windfall’s indomitable spirit might be credited in part to his breeding – Windfall is ¾ blood thanks to his full Thoroughbred dam Wundermaedel xx (who competed to the 4* level herself) and his second sire Burnus, an Anglo Arab. His sire, Habicht, was also a successful eventer, competing for Germany through the 5* level.

Windfall’s eventing career began as a four-year-old with Ingrid Klimke, who took him all the way from Young Horse Championships through former-CIC3*, earning a Horse of the Year title in Germany along the way. With Ingrid he was long listed for the 2000 Sydney Olympics before being purchased in 2000 by the Holekamps, who have always seen something extra-special in him.

Speaking with the Holekamps about Windfall, it’s immediately apparent that he is an integral part of their lives. As soon as you mention his name you can see the softening of Cheryl’s eyes accompanied by the hint of a smile, or the fierce pride that seems to light up Tim’s face.

When asked to describe how much Windfall means to them, Cheryl said, “Everything. He means everything. He’s taken us around the world to so many places, we’ve met so many amazing people, and gotten to do so many incredible things. It’s been an amazing journey. It’s been an honor to have him in our lives. He’s truly one of a kind, definitely the horse of a lifetime.”

Many congratulations and a sincere thank you to the Holekamps on their accomplishments and for the unwavering support of our sport through their work.