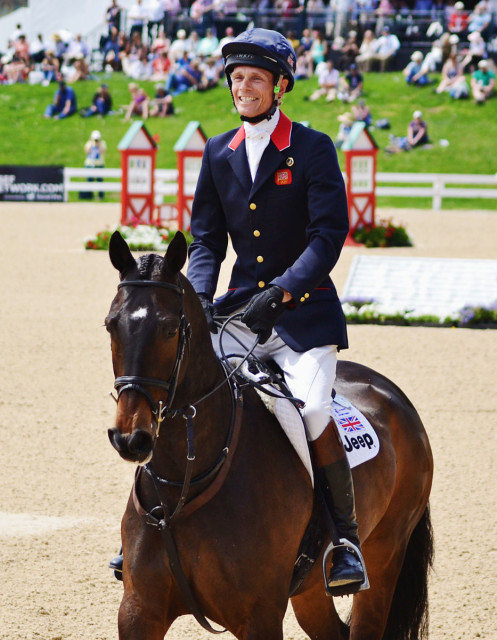 Rolex is such a thrill even for those of us not attending in person, thanks to the USEF’s live streaming. This year, I watched every second of the online coverage. Last year, I seriously considered taking time off work to watch. I decided listening to the dressage tests on my headphones while at work was sufficient. But this year, not working full time, I could watch it on a big screen, get popcorn, and kick back guilt-free!

I even got a thrill out of knowing there would be a watered-down version on NBC Sports. There is something exhilarating about seeing eventing coverage out in the “real world.” I always try to imagine what people who don’t know anything about the sport will think when they are flipping channels and come across NBC’s coverage. I love all the things that people find strange about the sport. (Some of my favorites are “It takes three whole days??” or “Wait…you need two saddles?”) Maybe because in that context, I have more in common with a four-star rider than I do with the “outsider.” I chuckle and nod and point at the TV to acknowledge our little inside jokes. “Totally,” I say to no one in particular. “I know exactly what David O’Connor is talking about right now.”

Speaking of, one of the most exciting recent memories I have of this sensation is when I found an old Fresh Air interview with David and Karen O’Connor. I listen to Fresh Air every single day, and one day I didn’t get enough so I looked up old interviews that I might be interested in. Lo and behold, there was an interview with David and Karen O’Connor after the Sydney Olympics. My celebrity worlds collided! I was so excited to hear Terry Gross talking about eventing and sounding so unfamiliar with this world I am familiar with. (It isn’t on NPR’s website anymore, but I found it through Audible.com. I think you can even sign up for a free trial and get one free audiobook, which is how I heard it for free. Just saying.)

Eventing doesn’t get a lot of press—in fact, hardly any at all. We always worry when something bad happens that the only press will be negative, but even then, it usually doesn’t get noticed. That’s why I absolutely love when eventing gets good press. Before the 2012 Olympics, I told everyone I knew to watch the NBC interview with Boyd Martin, because I knew it would give a positive picture of the sport, and sure enough most people said, “That guy’s cool,” which I interpreted to mean, “Okay—you aren’t all insane.”

I don’t really need or want the sport to get any more attention than it does; most fringe sports will stay on the fringes, and that’s okay. Even though a lot of people make their living at competing on the international level, for the most part eventing is an awesome hobby-sport that, if you play your cards right, you can do for nearly your entire life. But it’s precisely the lack of attention makes times like Rolex and the Olympics so special. I cherish these moments when eventing steps into the spotlight very briefly and those of us who reside in the “hobby” side of the sport get a little taste of the spotlight for ourselves.