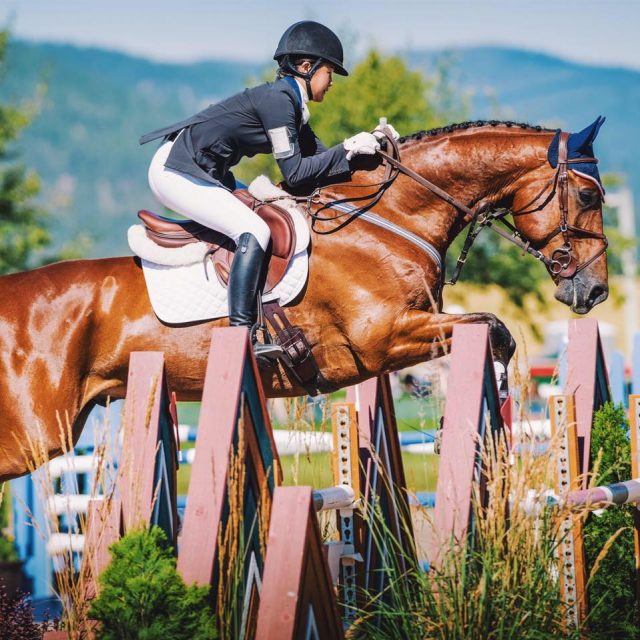 As Thanksgiving and the holiday season are finally upon us, I can’t help but to reflect on how quickly 2017 has blown by, who has been there throughout, and what a whirlwind 2017 has been.

This year has been, by far, one of the worst years that I have ever had. That being said, it has also been one of the best, since I have been able to gain a new perspective about life.

Some of you may know that the day after Christmas last year I lost my horse Walter. I didn’t think it was possible to feel so much heartbreak. I had just left for a family trip two days prior when I received a call in the morning that he had fractured his leg. It crushed me knowing that he was just on the other side of the phone, but I still couldn’t give a proper goodbye.

I was so proud of him. He was the first horse that I “brought along,” introducing him to eventing after his career as a jumper. He went from Novice to our first one-star in a year and by the end of 2016, I was preparing Walter for Intermediate for the start of the 2017 season, with my sights set on NAJYRC.

I didn’t really know what to do after Walter died. Walter was my rock during the transition from high school to college and served not only as my partner in achieving so many goals, but also was my instant stress reliever, often times just as reason to smile. I remember feeling so numb, unable to adequately process what had just happened even days after his death. Going home to an empty stall was probably the point when it really hit me. By this time, school was beginning in about a week, so for the time being I decided just to focus on school and to take a step away from riding.

I struggled with the idea of coming back to riding. Losing Walter made me feel guilty for not being there, not saying goodbye and like I was not allowed to move on. But having nothing to ride meant not doing what I loved doing everyday for essentially all of my childhood. My trainer gradually tried to ease me back into riding horses here and there and eventually asked me about maybe trying horses for myself again. I was so hesitant, even terrified at the thought of losing a best friend again, still thinking maybe it was time that I just throw in the towel. But by reliving all of the happy moments through my photos of competing Walter, I was reminded of how much I love riding. There was just no way that I could let this sport go too.

It took Walter dying for me to wake up and realize where my passion was and how empowered it made me feel. This was Walter’s gift to me: to learn what it meant to be fearless, proud, confident, passionate and of course, immensely grateful. I was grateful to be able to look back on our journey and see the challenges we went through and overcame, to watch videos from competitions where we had never looked more in-sync, to see photos of my most genuine smile with Walter’s focus as we galloped on cross country. And even beyond the scope of me and Walter, I was so, so grateful for all of the unwavering support from friends, family and strangers alike. The eventing community came in, full force, sending hugs and the kindest of messages. It really took me by surprise of how a little kindness went such a long way. 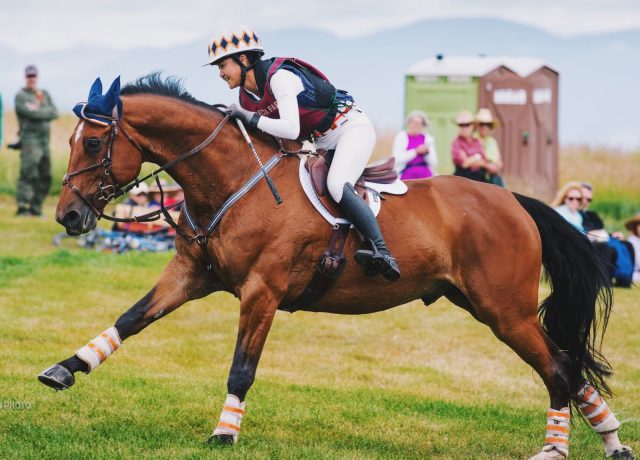 Walter and I, heading home in our first CCI*. Photo by Shannon Brinkman Photography.

Fast-forward to February of 2017, when I met Carajan (who later received the barn name Noodle). He was a 5-year-old Holsteiner jumper with the same grandsire as Walter, and also a similar dependable personality. To me, this felt like it was meant to be and it even felt like another gift from Walter. We were officially a pair by mid-February and I could not be more excited about getting back into the show ring. 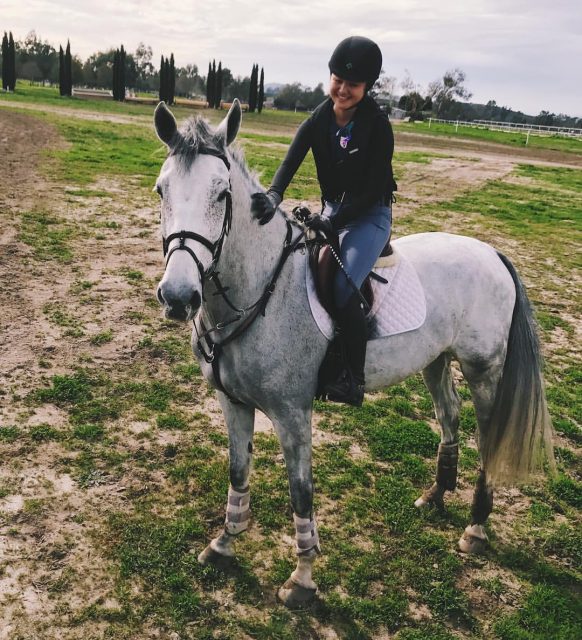 Unfortunately, Noodle was a bit sensitive when it came to scratches so the first couple shows we had entered became a no-go, which made me feel disappointed yet even more hungry to introduce him to the eventing world with a bang. Our patience proved to be worth it when Noodle won his first event in May. We excitedly moved him up to Training where we let him experience the different new venues and technical aspects of each course, bearing in mind that making him an established event horse wouldn’t be a short process.

By August, my trainer and I were feeling super confident in Noodle and I was too excited about our upcoming event at Woodside. We had been so focused on putting together our dressage and cleaning up his rideability in the show jumping – everything was coming together so well. But after our long haul up to the event, our spirits quickly plummeted. On the morning of dressage day, we recognized that Noodle was not feeling well — he was colicking. Just to be safe, we opted to take him to a hospital in case any emergency procedures would be required. He never did go into surgery. Noodle experienced complications and died at the hospital that afternoon.

Watching him pass away was probably the hardest thing I’ve ever experienced in my life. I still can’t wrap my head around why he had to go at such a young age with such a shining future waiting ahead. Our journey was cut too short, but I still feel the same pride from growing with Noodle in our fleeting six months as I do from nearly two years of growing with Walter.

The grieving process began again with the same sense of numbness for a while until it really hit me like a truck. Yet once again, I was truly enamored at how kind the eventing community was. I was overwhelmed by people’s efforts to be there for me: some being a shoulder to cry on, some asking me if they could make me a nice home-cooked meal and others giving Noodle and I beautiful flowers. All these kind gestures were how I was able to get through the grief, of which I am eternally grateful. It gave and still gives me inspiration every day to be a kinder, more generous human being because I constantly experienced firsthand how a little kindness goes such a long way.

Ultimately, this year was a year of gratitude. I have learned more than ever to be grateful for every day and all the moments, big or small. I take in each day now, often reflecting about how great my life truly is and how lucky I am to be surrounded by such supportive and caring families, friends and communities. I feel that I’ve grown simply from knowing Walter and Noodle, and hope that they knew just how much they mean to me and how much they taught me about loving and life. I received so much from the two of them, not just in goals and achievements but in a capacity that is simply unmeasurable by any scores or results. 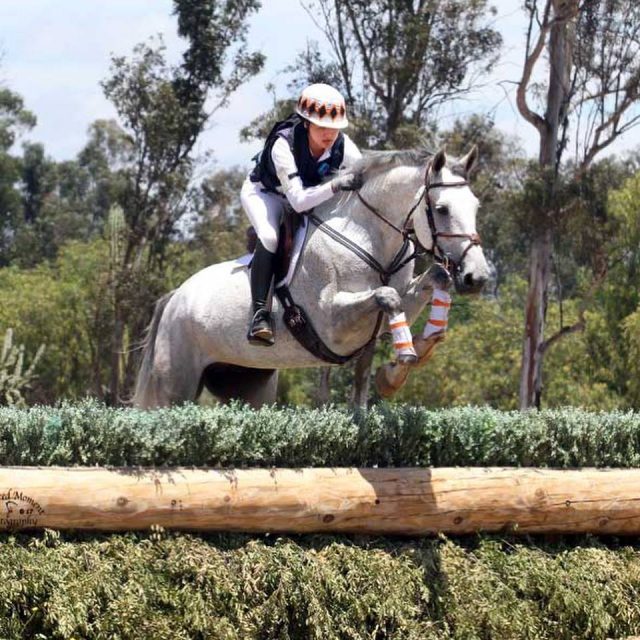 Noodle in our first training. Photo by Captured Moment Photography.

So, cheers to the four-legged friends that leave permanent marks on our hearts. Cheers to the kindness and generosity of the eventers. Cheers to our sport for bringing us all together. It’s been one hell of a year, but I couldn’t have done it without my dear friends and those kind strangers. I hope I can return the favor to you all by being kind, giving back, and hopefully making your day a little brighter and your smiles a little wider.