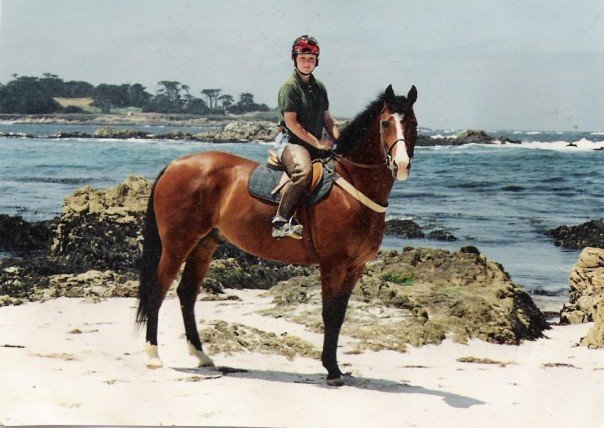 Despite being over 15 years old, I still have this saddle pad and use it semi-regularly.

This weekend is the Hawley Bennett clinic at Dragonfire, and as with all occasions where photographs may be taken, I found myself putting some thought into what my horse and I would wear. I am a bit obsessive about these kind of things. This train of thought eventually started spilling out of my mouth and bubbling over in to conversation with my husband, who took it in stride and nodded at all of the appropriate moments. He really did a bang-up job of making it look like he was listening to my endless droning about which shirt with which breeches and then which saddle pad while he played Borderlands 2.

While I was babbling mindlessly about the merits of one outfit versus another, I came to the realization that I have way too many saddle pads, even though I’ve sold several at tack swaps over the last few years. While I was cooking dinner, I took a mental inventory of my saddle pads and came up with 11 (which means I’ve obviously forgotten at least another half dozen that are in storage).

I have four pads that I’ve owned for at least 15 years. Two are shaped saddle pads while the other two are square — green plaid and black with white binding. I have a waffle-weave pad that is white with black binding that I picked up at some point in the last three years, but can’t recall where or when. I have a Hawaiian print pad that was a gift from my mother, as well as three monogrammed pads that are part of my everyday collection. A fourth monogrammed pad lives in my “I-can-still-call-this-show-equipment-until-I-need-an-excuse-to-go-shopping-again” pile. Finally, I have one more white with black piping pad.

That pad happened to be an emergency Erin Freakout purchase because due to some weight loss, my black coat that I’d planned to wear all weekend felt a little big and boxy in dressage, and I couldn’t stand to wear it for Stadium.  This meant I’d end up wearing my better fitting navy coat, but because a black pad with a navy coat looks weird when you’re a matchaholic, it also meant I had to run by the tack truck and grab a white pad. They didn’t have any white-with-white piping, so I cringed and accepted the fact that at a distance navy and black can look pretty similar when you’re talking about piping.

Despite all of these saddle pad options, I realized that I will most likely buy another pad when I swing by the tack store before the clinic because I’ve already begun the process of self-sabotage. I realistically don’t have time to make a clandestine laundromat run, and showing up with a dirty pad for a clinic is just rude. Also, I’m hopelessly addicted to saddle pads, and a clinic is a much better excuse for saddle pad number 12 than admitting there’s a problem.