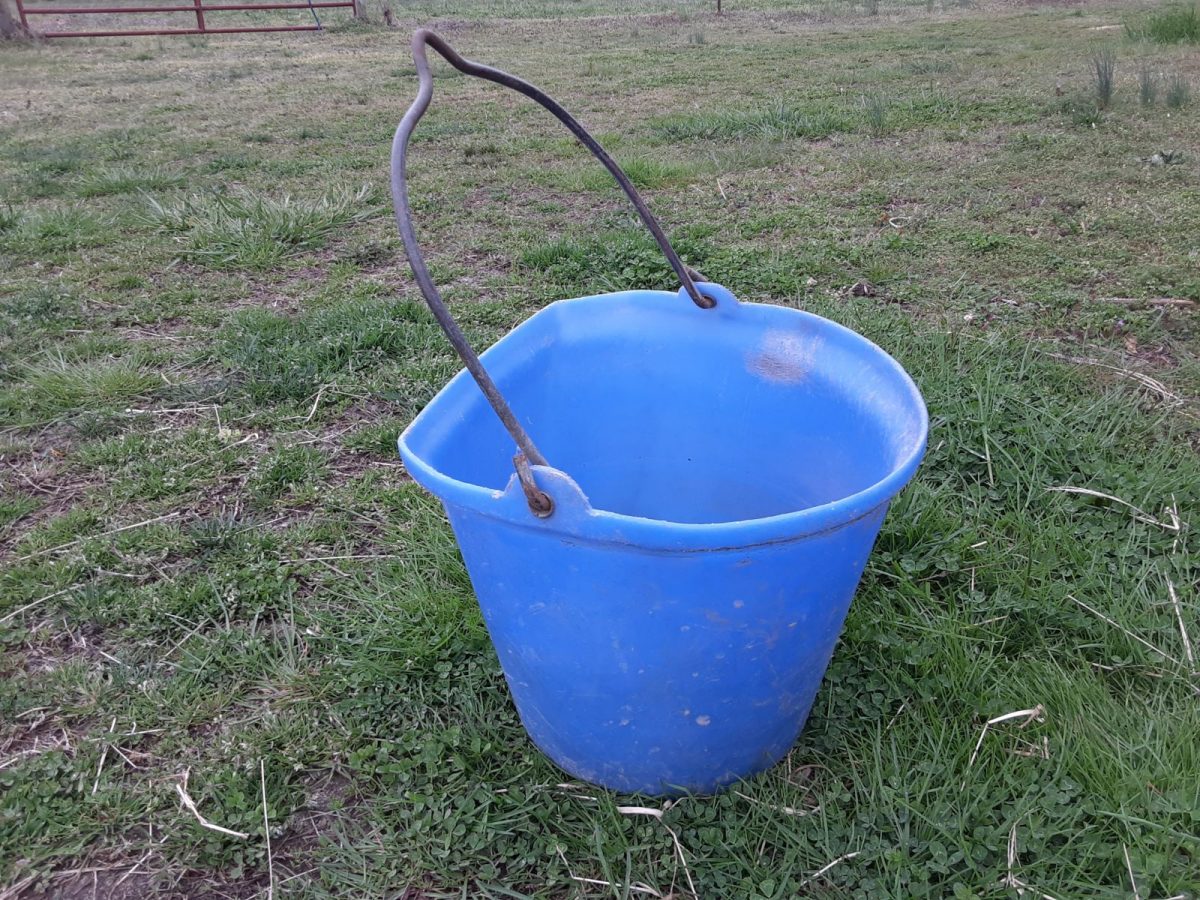 This old bucket … it has stories.

It has been across the nation twice, once in a horse trailer and once in a moving van. It has been under the muzzles of about 20 of my horses and a few more that I didn’t own but rode and loved. It has had a lot of use and abuse over its 30 year history.

As far as I can tell, it might be the world’s oldest water bucket, at least, it’s my world’s oldest. I bought it from a catalog and had it shipped to me when I was in California, keeping horses in Woodland Hills. It was stood on for braiding to compete at Moorpark and Ram Tap and traveled to Coconino and Lily Glen and hung in portable stalls and wooden polo pony pens and on pine fence rails with haystring looped over the handle.

Then it went back to the Northwest with me and met Cindy Burge in Washington and helped carry fencing tools when I helped her build the Deep Creek Horse Trials. It followed my horses as they shipped all over the west, and then when I moved east, it came along, too.

It went into a racing barn for a while and was used for all kinds of things — carrying water, grain, bandages, grooming tools, and then when we bought our place it helped create our farm.

The bucket held tools, and paint, and backbreaking rocks that were picked up by tired hands from the track and in the ring we built. It held jump cups when my jumps got built and set up. It held boots for the barnful of horses that were exercised every day in the barn when we were busy and full. It sat sentinel in the barn aisle as it held many things safely and proudly.

It got scratched a bit, and knocked around, and hoof oil spilled in it that was a real pain to get out. It accidentally got into the garbage can a couple of times, and I rescued it at least twice. It was lost for about a year in the tractor shed, half buried under an old pallet that I thought was on a half a cement block, and which held heavy round bales – and survived. It’s biggest injury was to its handle while sitting in the barn aisle.

Its big tough metal handle got run over by a hay wagon one day. It was bent almost in half, squeezing the bucket almost shut, and I was afraid it was a goner. I stopped unloading the hay, and tried to fix it by pulling the handle back out, but didn’t have quite enough strength to get it back the way it was.

When my boyfriend heard the sadness in my voice when I told him it was probably done, he went out to the barn in the night, after a very long hard working day, and turned on the barn lights and heated up the handle with a torch and put it on the anvil and banged it back to shape and put it back on the bucket, and that kindness made me cry. That was its toughest injury, but it survived.

It had a pretty easy life after I bought new feed tubs and water buckets a couple years ago, and it held fencing supplies for a long time in the storage room. Recently I needed a bucket for something and decided to empty the fencing stuff into another container, and I set it aside, empty, for another use.

Because right now we all have a lot of time to fix and clean, I picked it up today and thought, “it needs a scrub.” And I took it to the wash rack, the old familiar bump on my leg as I carried it, and it brought back memories of the horses who drank from it. While I scrubbed it and rinsed it, I knew it was still working. Helping me think of the good days.

An old bucket holds your hopes and dreams, while you fill it with water and hang it up, or grab it and fill it with tools and walk with it banging your leg, reminding you it is still working.

Its sturdy, thick bottom won’t let that hope run out. Its heavy metal handle won’t break and won’t bend under the strain of worry and stress. It promises to hold what you need, and when you get back to the barn, it is there — might be dusty, might be scratched — but it is available for duty.

It’s just an old bucket, just something in the barn that has been around for a long time.

May everyone have an old bucket to save you.