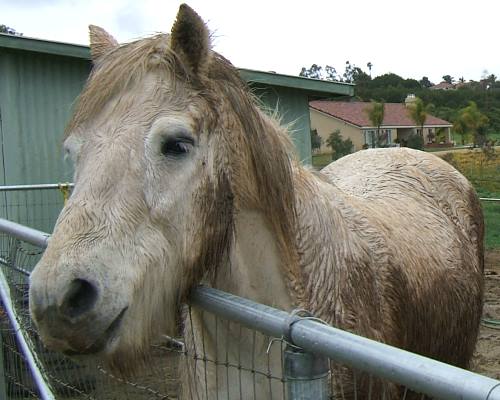 I think he found some mud. Photo via Iceryder.net

One of my horses is gray. It has been very muddy in the pastures lately. You do the math. I found an eloquent poem to express my feelings on the matter, and I hope you enjoy it as much as I do.

Horses always captured my attention
whenever I watched a cowboy flick.
The hero’s magnificent white horse
would usually be my favorite pick.

I would be totally enamored with them
and would slip into a fantasy zone.
Then I would go off and daydream for hours
about owning a white horse of my own.

One day I went out and bought one.
She was almost pure snow white.
A tall young filly that would have been
a cowboy movie star’s delight.

I was as proud as a peacock to have her,
but learned a few things in due course,
about the cold hard facts of owning
what I thought was a pretty white horse.

The simple truth of the matter is
clean and white they just won’t stay.
It’s always becomes very apparent
what they came in contact with that day.

They can change to about any color
from mud brown to manure green,
Or be spotted like an appy or a pinto
or perhaps somewhere in between.

I have seen her turn into a buckskin
when she gets all coated with mud,
and she’s been a golden palomino
after she has wallowed in the crud.

One thing I can always count on
when I saddle up my white pride
is I have to give her a shower
before I can get on and ride.

One day I saw something so shocking,
it filled my heart with dread.
My young filly’s snowy white chest
was covered with streaks of red.

I was horrified – I thought it was blood
and I darn near almost fainted
until I realized she’d only leaned against
some panels I had just freshly painted.

I know they are other horse owners
that share in this pigment plight.
They too have seen their ivory equines
turn different colors overnight.

As for myself, I admit it’s a losing battle
that there just ain’t no use to fight,
since a supposedly white-colored horse
never, ever seems to stay white.

Fortunately, all is not lost; I recently picked up some Absorbine Showsheen Stain Remover, which has been helping my gray gelding stay gray and not, well, every color but. Its color-safe formula contains natural green tea and fruit extracts, so it smells great and helps conditions his coat. Pick up a coupon here! Also, be sure to check out Alandra Halem’s tips for keeping gray horses like Allison Springer’s Copycat Chloe squeaky clean and gleaming.

This week in horse health news:

Insulin Sensitivity May Largely be a Breed Issue: A British and Australian study has found that some genetic differences between various horse breeds may determine predisposition to insulin sensitivity. [The Horse]

Beware of the Fungus Amongus: Mycotoxins are toxic compounds produced by molds and fungi commonly found in grain, hay, and soil. The Horse examines different types of mycotoxins, their impact on horses, and how to avoid them. [The Horse]

Compounded Drug Blamed for Four Horse Deaths: A compounded drug containing pyrimethamine and toltrazuril has been pinpointed as causing adverse effects in ten horses; four of these horses have died due to reactions including fever and seizures. The drug, which is not FDA-approved in animals, was used to treat equine protozoal myeloencephalitis (EPM). [USEA]

Magnesium Supplements can Reduce Joint Disease: A Dutch study has found that magnesium supplements can help reduce the incidence of osteochondrosis in foals. [Horsetalk]