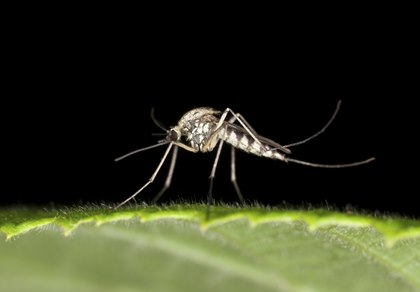 The embodiment of evil. Photo by Thinkstock

Now that spring has finally arrived in Minnesota (a couple of months late, in my opinion), I was finally able to enjoy a much-needed trail ride in the sunshine with my horse. The skies were clear, the air was still, and birds and squirrels chirped happily nearby. Suddenly, another familiar form of wildlife made itself known. Cue the common but hated mosquito, flitting in purposeful swarms toward my horse and I, drawn in like zombies for the kill. Or should I say vampires?

Yep, it’s Minnesota’s second-longest season (after winter): mosquito season. Fortunately, thanks to insect repellents and vaccines for my horse and I, we can be saved from the worst of these awful insects’ damages, but that won’t stop me from doing my frantic, slapping interpretive dance whenever I hear that dreaded, high-pitched whine.

For those in mosquito-ridden areas, remember to have your vets give West Nile Virus (WNV) vaccines to your horses!

This week in horse health news:

Equine WNV Study Pinpoints Birds: Czech researchers have determined that while West Nile fever have been affecting horses in Central Europe at a steady rate in recent years, international horse transport is not a likely culprit for spreading the disease. Migratory African birds are probably the cause of central European WNV in horses. [The Horse]

Help Horses’ Hooves: The British charity Society for the Protection of Animals Abroad (SPANA) found that 99% of Ethiopian carthorses studied had hoof problems due to improper or inadequate farriery. SPANA is raising funds to train local farriers, in hopes that issues such as chronic lameness and injuries due to overgrown hooves and incorrect shoeing can be reduced or even prevented. [Horsetalk] [Donate to SPANA]

No Major Injuries After Derby: After a string of tragic losses in the eventing world, we are overdue for some positive news after a big equestrian event. Fortunately, The Horse reported that the Kentucky Derby horses finished the race without any serious injuries. [The Horse]

Ever Wish Your Horse Could Tell You Where It Hurts? Dutch researchers have created a composite pain scale (CPS) for horses, to help humans understand common pain behaviors in horses experiencing musculoskeletal or abdominal pain. [The Horse]