Thoroughbred racehorses that go on to second careers are unique in that they have two retirements in their lifetimes: the first from the track and the second from the show ring. Thoroughbred Legends, a new EN series presented by Cosequin, seeks to honor off-track Thoroughbreds that went on to accomplish great things as upper-level eventers and now enjoy a second retirement in their golden years. If you know of a great Thoroughbred for this series, tip me at [email protected] 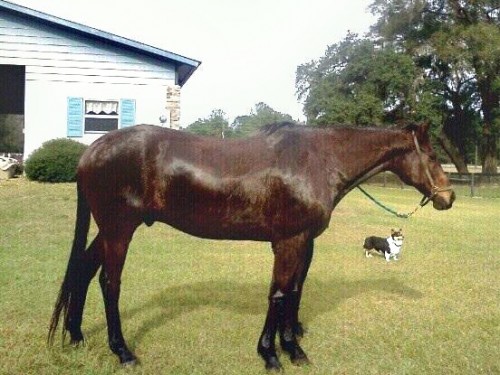 Thirty-year-old Molokai with his Corgi friend Dan after a bath in Ocala.

Immortalized on a “Wheaties” cereal box in his heyday, Dorothy Crowell’s Molokai, now 30, spends his days soaking up the sunshine at Sycamore Hill Farm in Frankfort, Ky., about 30 miles from where he won the inaugural USET CCI4* Championship at Rolex in 1998. It’s a fitting retirement for a horse that accomplished so much as an upper-level eventer.

Before he concluded his career with that impressive second-place finish at Rolex in 1998 at the age of 16, “Mo” earned a silver medal at the 1994 World Equestrian Games; made the short list for the 1992 and 1996 Olympic teams; and garnered top 10 placings at Badminton, Burghley and Rolex. A 1983 American Thoroughbred by Hawaii out of Pretty Copy, he raced six times before beginning his eventing career, one that suited him much better.

Mo’s field sits in front of Dorothy’s house, where she can look out the windows to see him grazing with Burton, his pasture mate of four years. He enjoys all-night turnout and comes in each morning to receive his special mash, as his teeth have all but deteriorated at this point in his life.

And once a week, he relishes in a “scrubby bath” to scratch all the itches he can’t quite reach anymore in his old age. “I have little rules at my farm,” Dorothy said. “A horse is not allowed to rub his head on you until he’s jumped around at least one CCI3* clean and fast. Only a few horses at the farm meet that criteria, and Mo is one of them. I’ll take off his fly mask, and he’ll spend as long as he wants rubbing his head on me.” 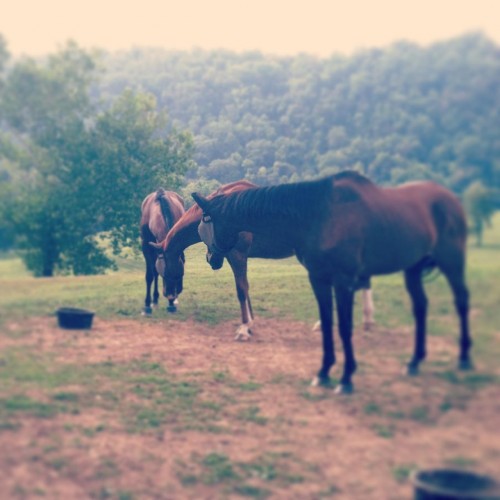 Mo watches over Burton and That Bay Horse in his field in Frankfort.

Dorothy has struggled to keep weight on Mo each winter throughout his life, and the problem persists in his golden years. “During the first two years of his retirement, I would come home from Florida and he would look skinnier and older,” Dorothy said. “That’s been true throughout his career. He just always lost weight when it was cold, no matter what you tried to do.”

Buddy and Dorothy Henry, who own the farm in Ocala where Dorothy and her students winter, heard about Mo’s plight and insisted she start bringing him too. “Every year it gets a little scarier for me to put an old horse on a trailer for 14 hours, but every year I’m glad I’ve done it,” Dorothy said. “He has a seven-acre field with gorgeous draping oak trees. Every year he immediately gains weight and starts looking better.”

Dorothy believes spending those winters in Ocala has ultimately extended Mo’s life. “My dream is that he’ll lay down in a field on a sunny day and go to sleep, and that will be that. I’ve talked to people who have horses that are 36 or 37, and I didn’t even know it was a legitimate possibility. But, of course, now that’s what I’m hoping for,” she said.

“Because of Mo and because of what he did for me, I was able to turn my love of eventing into a business that has been able to build my dream farm. Every day when I am appreciating the indoor arena or the lovely house I get to live in, it’s definitely with thanks to Mo. It’s Mo that started me down this path, and it’s been a lovely path to live on. He deserves to be treated like a king, and he is.”