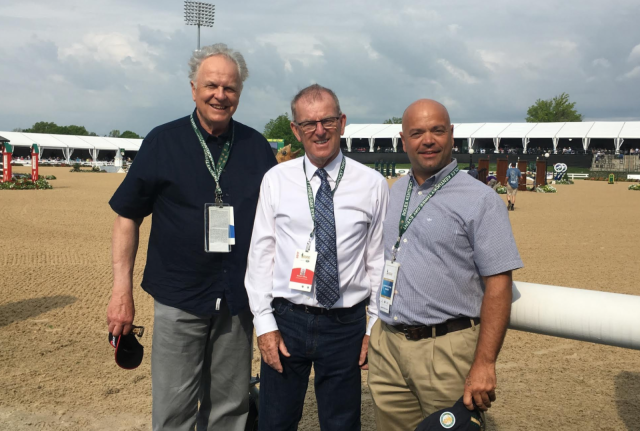 Dougie Burley was a radiator. Nothing to do with central heating, more like internal heating of the human spirit. I was told long ago that the world can be divided into drains and radiators: the drains being the people who are concerned with what they can take out of a situation, while with the radiators it is what they can give to a situation. Usually it is also a divide between negativity and positivity.

With Dougie Burley there was no question about it, he gave his smile and energy to every day and every person he met. He was far from wealthy but had a rich line in chuckles and generosity. My father came across him because he was part of the bank repair crew at the Four Burrow Hunt in Cornwall. They went round the farms the day after hunting, repairing the banks and keeping the farmers on side.

The area of operation for his fence building skills quickly spread to hunter trials and then to the Pony Club, and he became a specialist. Not for him post and rails and fences in beautiful parkland. What gave him pleasure was bank building, the precise interlocking of stone and earth in such as way that the stone stopped the earth collapsing, while the earth formed the perfect stable bed for the stone.

An ideal marriage of materials to form both the traditional Cornish field boundary and the ultimate obstacle for horses and ponies. To our delight as children banks were something that leveled the playing field when hunting, as a good pony was able to jump any size of bank, whereas in fly jumping country, as post and rails and gates were known, many ponies are simply short of scope or secure riders.

But where Dougie found his real talent and what gave him special pleasure was digging ditches. My father considered ditches the ideal Pony Club obstacle. They were both a rider frightener and pony frightener and as such were a significant mental challenge, but a minor physical challenge. Even a stiff untalented Pony Club pony can jump a fairly wide ditch by just using their normal stride length, as no great height is needed.

So by using a lead from a couple of experienced ponies, plus some enthusiastic use of the rider’s legs and a great shout from my father of “throw your heart over first,” the challenge was overcome. Then repeat a few times for luck and both pony and rider returned braver and beaming. As I often say talent and potential are where you look for them.

How to dig a ditch

My mum was always pleased to collect Dougie Burley from his little terraced home near Rame in Cornwall. He had never learnt to drive. With a broad smile he would cry “to the woods, to the woods,” the relevance being that digging ditches in prime pasture land did not appeal to our Pony Club hosts, the Williams family at the elegant Scorrier estate. (*Hence ‘Scorrier snaffle’ — see image below.) So the one place Dougie was directed to dig ditches was within the extensive woodlands in Scorrier.

So Dougie would get to work along the paths and clearings digging all sizes of ditches. No machinery, just the leverage of his narrow upper body and arms combining with his shovel. Digging is a science to some and many have a full range of shovels … digging shovels, trenching shovels, drain spades, scoop shovels, scrapers, edgers and variations between. Not Dougie. His shovel was the Scorrier bit of shovels, a multi-purpose tool that was part digging and edging shovel, with a sharpened edge; part trenching shovel with one raised side up half of its length to avoid damaging the edges of the ditch; and part drain spade with a narrowed end. This tool was the extension to his deceptively light arms and the means to his art.

He understood the huge pressure on the ground created by the horses on both take off and landing, so to give maximum support in these areas his ditches were trapezium shaped, angled out from the bottom of the ditch. Then the whole ditch was framed with timber sitting level on the land, not on the edge of the ditch … more protection for the land. And of course he was efficiency itself.

No spade of earth was moved twice, as for Dougie it was always a case of measure it twice, cut it once. He was a master of his art.

As Seamus Heaney said in his poem Digging, “By God, the old man could handle a spade … nicking and slicing neatly, heaving sods over his shoulder.” Once again talent and potential are where you look for them. 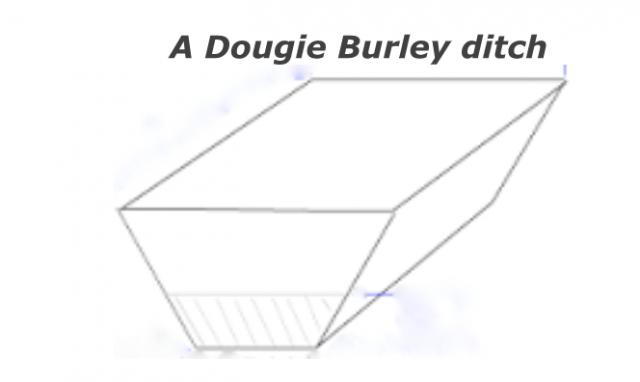 There is another type of job in equestrianism that requires the same precision and care. It is a profession that another Cornishman currently does in championship level show jumping and eventing competitions round the world, and has been at the very top of his tree for almost 30 years. He is also a man who was one of our childhood rivals at the local horse shows and in the neighboring Cornish Pony Club, the Western. His horses were always the best turned out and the best fed, but he probably would be the first to admit that he was not the most natural rider in the world. However he enjoyed every moment with his horses and especially his hunting.

But he has truly excelled in the horse world and is an exceptional role model. He has quietly worked from his strengths in design and his understanding of the demands of show jumping to become one of the very best show jumping course designers in the world. His name Richard Jeffery. He is one of only 32 top rated FEI designers in the world, winner of course designer of the year from the United States Equestrian Federation on eight occasions, and course designer at the World Equestrian Games and for many years at Rolex and Burghley.

Richard made it his business to learn from two great course designers Pamela Caruthers and Bert De Nemethy, who he says were both “sticklers for perfection, and this rubbed off on me, but despite this they always made you feel involved.”

Richard elaborates: “One memory in advance of the Los Angeles Olympics was Bert asking me, at that stage a very ‘novice’ Course Designer, what I thought of his courses on paper. It taught me that you never stop learning in this sport, and sharing ideas make you question certain things and hopefully you then make the right decisions. To this day I always share my Rolex courses with Marc, my main assistant there, for his comments  — a second pair of eyes is no bad thing!”

Richard is modest to a fault and explains his education and success as “basically it comes down to being in the right place at the right time.” But in truth it is much more a case of carpe diem (seize the day) and his mentors realising that he was an excellent student, with the discipline and interest to make it as a course designer. They saw that Richard had the talent and the potential.

On the same road

Twenty-five years ago in Scotland a teenager came to the Gleneagles Equestrian Centre who also seized each and every day. Although he came to us to improve his riding it was obvious that riding at a high level was not going to be easy for him, but it was equally obvious from his personality and attitude that as a manager and course designer he had huge potential, and we encouraged him in this direction.

So it was a golden day for me to meet up again with this man at Rolex where he was helping and learning from Richard Jeffery with the show jumping course. He is Chris Barnard. As many of you know Chris is now a USEF licensed jumper course designer and doing a fabulous job in the USA, building the tracks at among others Pine Top, The Fork and The Heart of the Carolinas. From the point of view of good coaching Chris’s point about his time in Gleneagles is this “The lessons and the lectures we had were not only educational but also inspirational.” But this was not difficult because we believed in his talent and long-term potential.

Another member of our Four Burrow Pony Club was the great granddaughter of ‘Scorrier’ John Williams, called Venetia. She had a young pony that was too much for her and I remember a conversation about Venetia probably not being suited to riding and hunting. But these people were obviously unaware of her huge work ethic and driving force to succeed, even when she was very young.

The same year that Venetia rode at Aintree my brother Charlie, the eventing rider and coach, led the field for about five fences in the two mile Champion Chase at the Cheltenham festival. The significance of this race is that this is the fastest horses ever go over a steeplechase fence! A special year for the Four Burrow Pony Club and high praise for good basic training that prepares a rider for all equestrian activities.

There are two strong connections between the stories of Dougie Burley, Richard Jeffery, Chris Barnard and Venetia Williams. Firstly all their stories confirm that ‘talent and potential are where you look for them’. It is so easy to write people off, especially when young, and often that is a self-fulfilling prophecy of failure.

Alternatively, when you believe that talent and potential are where you look for them our interactions with students become totally different. A more positive approach, combined with identifying possibilities and options, changes relationships and can open doors to extraordinary performance. Once a coach has this outlook then it is invariably a win-win outcome.

Secondly each of the four rode their own race, in their own individual direction, and using their own talents and tools. Without doubt they also worked hard but they also found things that satisfied them and on many days they loved. We can all develop our own tools for our own trade and direction. Best explained by Seamus Heaney at the end of his poem “Digging” … “Between my finger and my thumb the squat pen rests. I’ll dig with it.” His point being that his father was a master with his shovel, but his shovel, his tool, was a pen, and he would master his pen and his writing.

There are also two core message here. Although we can take many different roads, we cannot just sit back and rely on luck for success. We need to understand that a common fabric is needed to support success. It is a fabric woven by the strong interlacing threads of those two essential pairings, effort and delight, and confidence and competence.

Secondly we need to be true to ourselves, to find our individual talents and do things that in harmony with our personalities. If we don’t do this we will be digging a depressing hole for ourselves. A hole that may be difficult from which to escape. But if we are being true to ourselves, then like Richard, Chris and Venetia, we will instead dig our metaphorical well-crafted ditches and be content.

The Scorrier snaffle, also called the Cornish snaffle was invented by ‘Scorrier’ John Williams, the great huntsman and Master of the Four Burrow Hunt, in about 1900. It is a double ringed, loose ring, reversible, jointed snaffle! The inside rings attached to the cheek pieces act like a cheek snaffle, but with nothing sticking out to catch in shrubs or undergrowth, while both sets of rings create a small gag effect. It usually has one side of the bit that is not smooth to help control horses that are unresponsive.