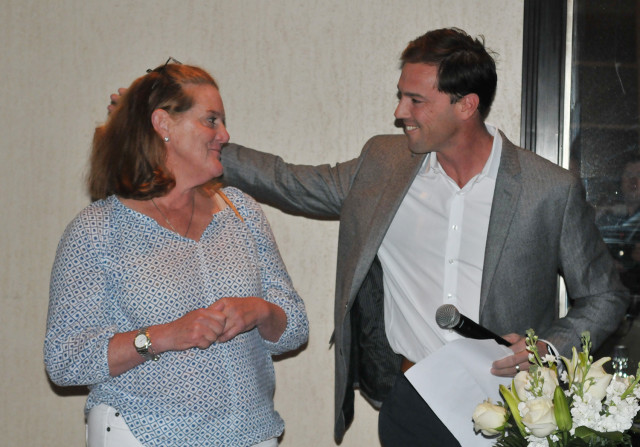 Will Coleman thanks Nanki Doubleday for her longtime support. Photo by Leslie Threlkeld.

In addition to the many awards given at the USEA Annual Meeting and Convention, the Professional Riders Organization selected three particularly special individuals to thank for their contributions to the sport during the Friday night PRO Awards.

Will Coleman presented longtime supporter Nanki Doubleday with the PRO As You Like It Owner’s Award. Nanki was Will’s first owner when he was just 20 years old and working to establish himself in the professional horse industry. He said that at the time he was really bad at business and would often be happy to accept a meal as payment for rides, but Nanki taught him to value his time and expertise for more than that and he credits her for helping him begin his professional career.

“When you’re a young professional just coming out of the junior ranks, your first owner is very special, and the fact that Nanki is still such a huge part of my career to this day, some 15 years later, it speaks to the singularity of her support and her loyalty,” Will said. The first horse Nanki owned for Will was Wild Frontier. She also owned Bromont CCI3* winner Nevada Bay and Conair, whose promising career was tragically cut short.

“Nanki has experienced more than her fair share of disappointments and each time has brushed them off respectively as being part of sport and part of life,” Will said. “One could hardly argue with someone if they chose to leave this all behind, saving themselves the emotional and financial cost of such frequent and untimely disappointment. But that’s not Nanki–she is no quitter. She’s one of the toughest ladies I’ve ever had the pleasure of knowing, and we honor her tonight for that fighting spirit and for loving in its entirety a sport that does not always love us back.”

Nanki’ is more than just a horse owner. She is a volunteer, works hospitality at Carolina International and has played host and chef to many riders and grooms. “As much as she loves her horses, it is the people of the sport that have endeared themselves to her,” Will said. “She embodies the relationships, friendships, camaraderie and fellowship that binds us all together.”

“She has been a pillar in the foundation of my career despite all that has and could go wrong. I know she will continue to be there until the end. For those of us that have someone like that in their camp you know how incredibly priceless that is. I know in my heart the best is yet to come for her and her horses, but it is her own perseverance and commitment that merits recognition and praise.” 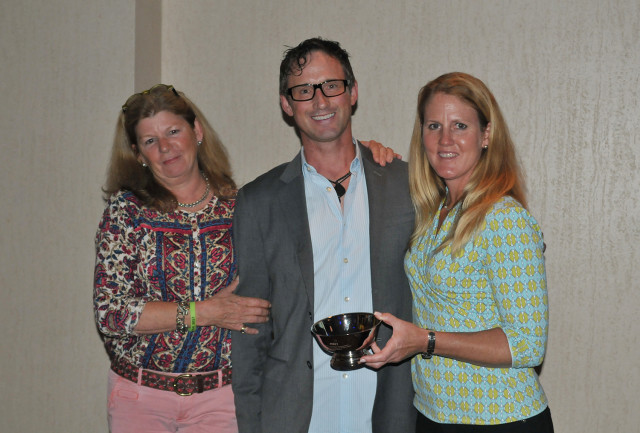 The Seema Sonnad Above and Beyond Event Personnel Award is given to an exceptional volunteer or event staff who goes out of their way to offer a great competition experience. Marc Donovan is this year’s deserving winner.

Marc is a show jumping course designer, the Carolina International Event Director and organizer of the wildly popular War Horse schooling show series at the Carolina Horse Park. In all his work, he keeps the welfare of the horse at the forefront of his mind.

This is the second year for the Above and Beyond award. PRO President Allison Springer said, “We miss Seema dearly. This was her vision. It’s really special that Seema wanted our group to take this award on and present it. I hope for all the organizers, volunteers and people that (make events possible) that we the riders are so grateful for everything you do for us.”

Kendyl Tracy will not soon forget the 2016 Convention as she went home with not one but two awards for being an outstanding groom for PRO rider Lynn Symansky. Kendal won the Christine E. Stafford Eventing Groom Award during the USEA Year-End Awards, and she received the Liz Cochran Memorial Groom’s Award from PRO, which includes a $5,000 prize.

Kendyl arrived at Lynn’s barn as an interim groom. She was done with college and was bringing along her young horse RF Cameron Velvet. She ended up staying on full time and Lynn said she selflessly put some of her own riding on hold to groom at shows. 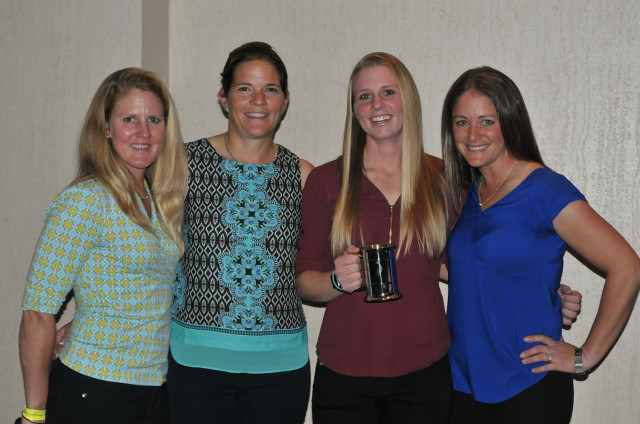 “She has been the most unbelievable person I’ve ever had the honor of working with. There’s a lot of good grooms out there, but it takes something else to be a truly exceptional groom. I think that goes to Kendal’s quality of nature,” Symansky said. “She really gets the psychological needs of the rider and she really gets the horse and it’s been an absolute honor to work with her.”

Kendyl has traveled the world with Lynn and her four-star Thoroughbred Donner, including going to Rio for the Olympic Games as the traveling reserve for the U.S. Eventing Team.

“I think if there is anything harder than being the reserve rider for the Olympics it would be the groom for the reserve rider for the Olympics,” Lynn said. She groomed for me like the horse was getting ready to win a medal every single day. Even after we didn’t jog up for the team she was there every single day helping the other grooms from sun up to sun down.”

“This award is very near and dear to my heart. Karen O’Connor and I started this award because, as you know, the grooms are the people that are behind everything that happens,” said Max Corcoran, a PRO Board Member and top international groom. “Our job is to make sure that when the riders get on their horses they worry about nothing else but competing their horses. They trust everything to us. Clearly it’s a labor of love; it’s not a money making scheme.

“Liz gave her entire life to looking after these horses…she was the kindest soul and gave everything to these horses to make them great. We lost her to cancer way, way to early. This award is in honor of Liz and the grooms that give their entire lives to these horses.” 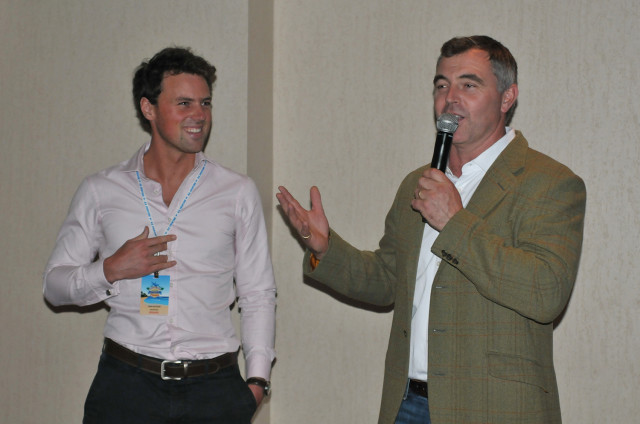 Sam Watson of EquiRatings and Hugh Lochore of Chattahoochee Hills work together to bring in bids to support the Liz Cochran’s Memorial Groom’s Award. Photo by Leslie Threlkeld.

As part of the effort to raise the necessary funds for the endowment, EquiRatings agreed to donate services to be auctioned off during the PRO Awards. Chattahoochee Hills organizer Hugh Lochore worked the crowd, encouraging bids. In the end, three separate bids of $2,000 each were accepted from Robert Kellerhouse of Galway Downs, Jane Murray of Carolina International and Richard Trayford of Ocala Jockey Club International. EquiRatings agreed to provide sports data to all three competitions in response to their generous donations.

If you would like to donate to help secure the continuation of the Liz Cochran Memorial Groom’s Award, contact PRO Executive Director Samantha Lendl at [email protected].

Congrats to all the winners from the PRO Awards and thanks for all you do for the sport. Go Eventing.

Want to learn more about PRO? Visit their website.