EN’s guest blogger and working student Jenny McCoy attended the Aiken training sessions on Thursday and was kind enough to send us a full report.  The training sessions continue with a full day of coaching today.  Thanks for writing this Jenny and thank you for reading.
—- 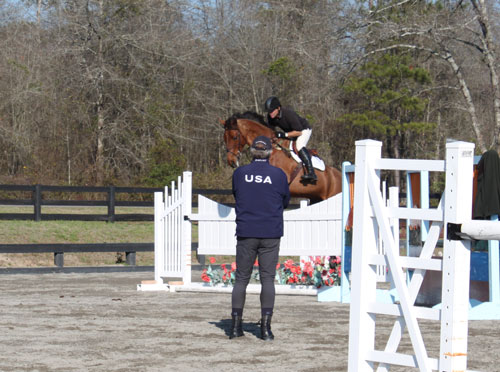 Today was a perfect 75 degrees with clear skies and a light breeze. Three Runs Plantation was a picture perfect facility with neatly manicured land and beautiful jumps. Our group of 11 arrived at the end of Phillip’s last ride, where he seemed to impress Capt. Mark Phillips while taking the rather large show jumps all in stride. Since it was the end of his lesson I didn’t catch much on what they were working on but both seemed very pleased at the end.

The rest of the rides were in the dressage arena, and Kelly Pugh was the first to go with Copycat Chloe. Kelly first was working on keeping her horse in front of her leg and coming more underneath herself. Mark was challenging her to keeping Chloe’s poll up without allowing any weight in the left rein, and pushing her with her seat to move up and out. Mark sat on Chloe for a few minutes and with the combination of that and Kelly literally working her butt off doing lots of counter-canter, the pair looked wonderful.

Doug Payne was next with Running Order who came in with his fancy front end and got right into working. Mark had Doug work on moving more forward without going faster, bring his hind end more underneath himself and lifting in the poll. Mark had him drop his rein connection multiple times to ensure that he was not using Doug’s hands as a ‘walking stick.’ In the canter they did lots of counter-canter where Doug received many ‘well done’ and ‘perfect’ remarks from Mark. He finished with some shoulder-ins and half passes to continue bringing the hind end underneath and pushing the front end up and out.

Next were Jennie Brannigan and Cambalda, who were my favorite pair of the day. Both were on their A-game, regardless of the fact that Jennie is recovering from surgery on her broken collarbone only a few weeks ago. Jennie toughed it out, but it was obvious at times that she was pushing through some pain. Mark was asking Jennie for less bit movement and to move Ping more up in his frame. They practiced making the medium canter bigger rather than longer, and also did multiple canter to halt transitions.

While Jennie switched to Walkabout and warmed up, Mark got on Allison Springer’s “Destination Known,” aka Burger. There was no commentary so we just watched as he made Burger look like a dream to ride. Jennie and Will finished up the day with the goal of pushing him into his contact without dropping down in front or getting too long in the frame. By this time Jennie must have been in an immense amount of pain, but she stuck through it and made Will look fantastic. She commented to Mark that Will reminded her a little of Cooper but different, and Mark’s response was, ‘Yes, all horses are the same but different, aren’t they?” It was a comical moment as Mark’s observation is so true. The pair took a while practicing half passes from the rail to the centerline, followed by a flying change. Jennie mentioned it was her first time schooling them with Will. Regardless, they both worked and worked and got it down perfectly, and Mark was very pleased.

I was thoroughly impressed by all the riders and horses today, and was inspired to go out and practice some of my own dressage! It was extremely educational!