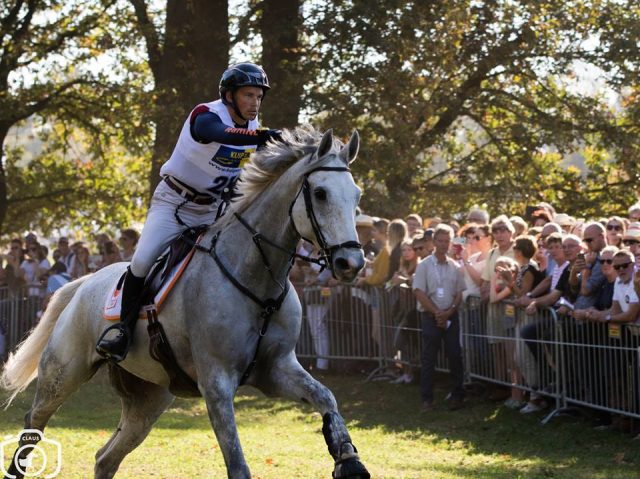 Tim Lips is one step closer to becoming the first Dutchman to win the Military Boekelo CCIO3* in Enschede, Netherlands. He and Bayro, a 12-year-old KWPN (Casantos X Vanya, by Corland), remain on their record score of 19.2 after posting a superb double clear round on cross country today.

“The fact that I [finished] the cross in exactly ten minutes was a bit of luck, and I hope that I will have this luck on my side tomorrow, too! The fact that I can be the first Dutchman to win this [event] tomorrow gives me a little extra pressure, but Bayro is a good jumping horse and has proven it several times,” Tim said. “Bayro not only felt great, but was also really sharp, so I was able to make that pace, and the enormous encouragement from the crowd along the route gave me and my horse wings.”

The top three placings remain unchanged. Less than a rail back from Tim and Bayro sits Germany’s Julia Krajewski and Samourai du Thot, a 12-year-old Selle Francais (Milor Landais x Melitos du Thot, by Flipper d’Elle). They clocked the second fastest round of the day, posting a time of 9 minutes, 49 seconds. They move ahead to show jumping in striking distance of the win on 22.6, and Julia is feeling confident for tomorrow.

“My horse has shown several times that it has no problems with the courses in the final jumping test, and I intend to stay faultless and put all the pressure on Tim’s shoulders,” Julia said.

Julia is also seventh after cross country with BG Amande’s 8-year-old Amande de B’Néville, having moved up 10 places after a clear round 1 second over the time in the mare’s first attempt at the level. 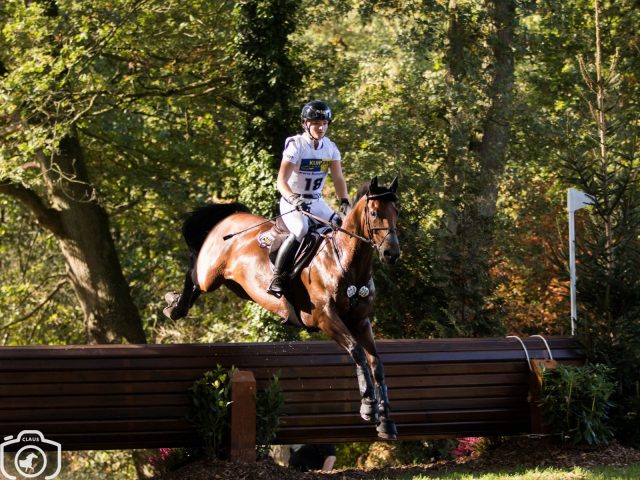 Great Britain’s Laura Collett and London 52 eased the pressure off the leaders just a bit, adding 1.6 time penalties for a two-phase score of 24.7 for third place in the CCI3* debut for the 9-year-old Holsteiner (Landos X Vernante, by Quinar). They’ll have little room for error tomorrow as Izzy Taylor (GBR) and Springpower, Astier Nicolas (FRA) and Alertamalib’Or and Dirk Schrade (GER) and Unteam de la Cense are all within a rail of third place.

“This is a relatively young horse that has made a huge step in his development here in Boekelo,” Laura said. “The way he approached the cross country and kept on galloping gives me the confidence that we can continue to work for my ultimate goal in the coming year: Tokyo.” 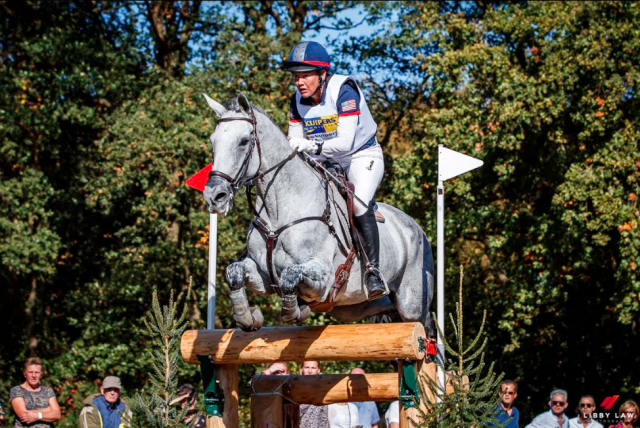 “It all went basically to plan. She was foot-perfect everywhere,” Tamie said of “Rory,” a 9-year-old Holsteiner mare (Riverman X Marisol, by Corofino I) owned by Judy McSwain. “You always have a ton of pressure coming overseas to perform, especially on a grant. She answered all the questions spectacularly and I couldn’t have asked her to be better. … She was smart and paying attention and rideable. The two chevrons caused quite a bit of trouble, and she was textbook through there. The water was great. The double corners was a hard line. I didn’t have one bobble.”

Tamie commented yesterday that the ground was a bit firm and there was concern that the sand-based footing could get deep as the day progressed. Tamie confirmed the footing in the turns was in fact quite deep by the time they were on course, and while Rory handled it like a pro, she’s is sure that’s one reason they lost some time.

“I really wanted to go double clear. I was a bit disappointed coming through the finish (with time penalties) then thought, ‘No, she’s 9. This is the process,'” Tamie said. “She just rocked around Boekelo like it was nothing, so I should be doing back flips!” 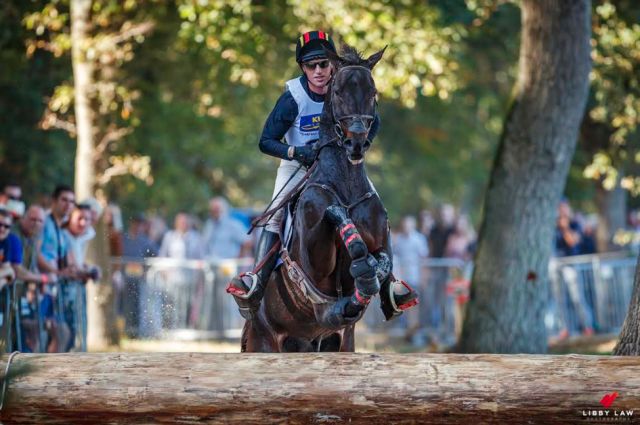 Doug Payne and Getaway, an 11-year-old Oldenburg gelding (Contendro X Ladula, by Lady’s King) owned by Lisa Wall, added 6.4 time penalties in their cracking clear round and are currently lying in 33rd place. “Flynn” absolutely cruised around the track, and the live stream commentators agreed they would “quite like to take him home in their lorry.”

“I couldn’t have asked for more. This was a massive step forward for him in his development,” Doug said. “He handled the course easier than expected and except for one overzealous jump five from home, we were on or ahead of the clock the whole time. I’ve got to thank the USET Foundation and Ms. Mars as well as his owners, Bob and Lisa Wall for the opportunity. He is a horse that will certainly make his mark in the future.”

It was a sunny, beautiful day and the normally buzzing atmosphere of Boekelo was heightened by increased spectatorship. “When it’s raining there’s a ton of people, but today they looked like ants swarming the course!” Tamie said. Doug was wearing his helmet cam and we look forward to seeing the action through the horse’s ears ourselves.

“We have had incredibly beautiful weather, we had fantastic sport and I think no more people have found their way to the cross than this year,” said Boekelo Chairman Robert Zandstra of the much needed foot traffic following difficult weather conditions and low ticket sales last year.

Seventy-seven horses left the start box today and all but five completed the course designed by Sue Benson. Whereas last year only one pair finished inside the time, today 14 competitors made the optimum time of 10 minutes — four finished right on it.

Kai-Steffen Meier fell from Eiskönig after the stallion tripped up the bank out of water at fence 16. They both walked away unharmed. Julia Schmitz fell from Lady Like at fence 22A in the main arena. There was a hold on course while medics tended Julia, who was transported off site for further evaluation, but she was reportedly awake and talking. The horse was uninjured. Rebel de Beaumont, ridden by Michel Duval Violton BCH, fell at fence 18. There have been no reports of an injury for horse or rider.

The final horse inspection will be completed before most of us are out of bed in the morning. But for now, it’s time to take a deep breath and enjoy the party that is Boekelo. Proost!