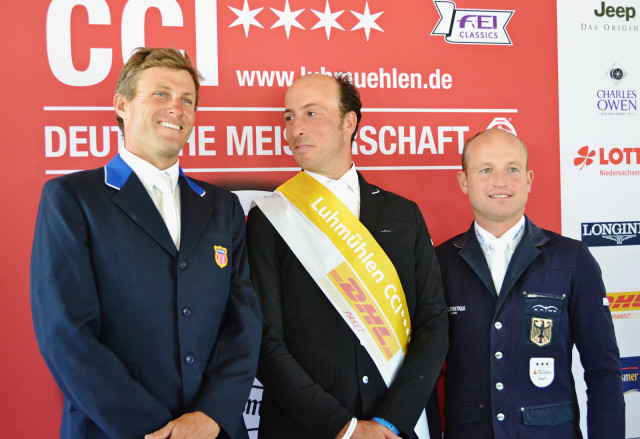 We’re starting to get very spoiled with Americans in press conferences. Boyd Martin was in good company this afternoon with Michael Jung and Tim Price as they spoke about their respective paths to the top three at Luhmühlen. Tim started by saying it’s difficult to carry on with the celebration in light of what happened yesterday, but the win is the culmination of years of hard work. He and Jonelle Price, his wife, came to Europe from New Zealand to start their careers, and he said “it’s great to realize it is possible” to win a four-star.

Wesko, an 11-year-old Dutch gelding, has only been eventing for four years, having previously been a show jumper with a young rider. But when Tim took over the ride, the horse took to the sport like “a duck to water,” and while he said there have been a few bumps along the way in their quest to be competitive at the Advanced level, the horse has really come into his own, as evidenced by his flawless performance this weekend. Wesko was ultimately the only horse in the competition to finish on his dressage score.

The path to victory was a little rocky when the jump judge initially said that Tim and Wesko had jumped outside the flags at a skinny brush in the main arena yesterday. You can watch a video of their trip through that combination in this post, which shows nearly a head-on view of the fence in question. Tim’s score was originally shown as clear, then 20 penalties were tacked on before ultimately being removed, as the ground jury had to wait until the end of the competition to review the footage.

Michael Jung only spoke in German in the press conference, and the press team was kind enough to provide me with a quote in English: “I am struggling to come to terms with Ben’s accident and find it almost impossible to talk about it. Although I am tremendously proud of my horse, I find it hard to enjoy our success.”

It looked like Michael had the win in the bag until the final double combination, where fischerRocana FST knocked the first fence. Truthfully, she rubbed her way around the course, and this is not her best phase. She was also poised to win Boekelo CCI3* last fall before pulling three rails, and she sadly missed out on the win again today. But the mare is just 9 years old and clearly another superstar in the making.

Boyd Martin spoke next and started out by congratulating Tim, who he did young riders with back in Australia and New Zealand — “when he had hair and everything.” “I know where he’s come from and where he started, and it’s just fantastic seeing him become a champion,” Boyd said. Everyone in the press conference was very curious about Boyd’s broken leg, as they should be. He started riding just nine weeks ago and has competed sporadically since, doing an Intermediate horse trial two weeks ago as his prep for Luhmühlen.

“I’m very lucky that Phillip Dutton, who is one of my good mates, prepared the horse for me,” Boyd said. “Luckily, the horse is brilliant, and I just hopped on him this weekend, and he knew what to do.” In response to whether Boyd would preference Shamwari as his mount for WEG: “I’d like to ride him. Phillip rode Trading Aces in eighth place at Rolex, but I think Shamwari could possibly to a better job individually, and Otis is a bit off the pace after this weekend.”

That’s a pretty accurate assessment of where things stand with the final selection trial in the bag. I’ll be bringing you my predictions for the WEG team shortly, but it shouldn’t come as much of a spoiler alert that Boyd and Shamwari should absolutely find their names on the list when it publishes later this week. They did everything they needed to this weekend. Congrats to Tim on the win and to Boyd for the impressive showing, as well as to Phillip for finishing seventh. If you haven’t watched it yet, click here for my interview with Phillip and Boyd after show jumping.