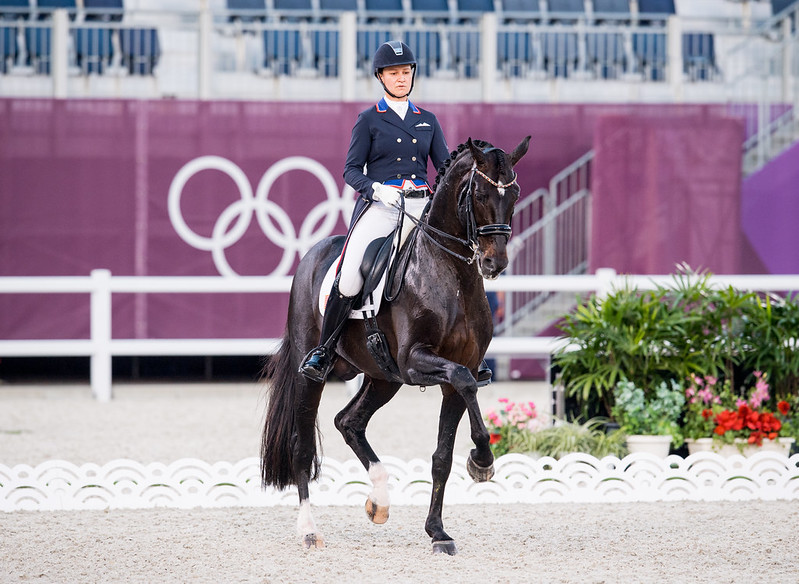 Team Germany continued to build up a head of steam when moving to the top of the Dressage Grand Prix leaderboard at the Tokyo 2020 Olympic Games today. Two great rides, from Dorothee Schneider with Showtime and the living legend that is Isabell Werth with Bella Rose, secured pole position at the end of the competition which decided the eight best nations that will go through to Tuesday’s medal-decider, the Grand Prix Special in which all teams start from scratch. 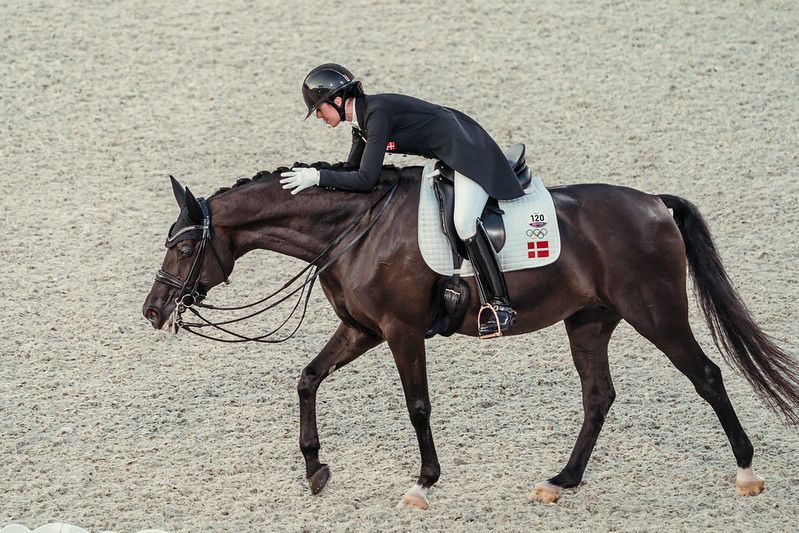 Denmark’s Cassoe Kruth and America’s Lyle claimed the top two spots in Group D when the action resumed this evening, and then Germany’s Schneider headed up Group E after a lovely test. Schneider said her horse was “a little bit tense but it’s normal for him on first day”. She’s had a late return to top competition for a range of reasons.

“Showtime competed at the European Championships in 2019 and then he was at home because I wanted to keep him safe for the Olympic Games in 2020 and then there were no Games! I wanted to start early in 2021 but then I had an accident in April. But he’s an experienced horse and once he gets out to compete three or four times he’s fine”, she said of the gelding who carried her to team gold at the Rio 2016 Olympic Games and who she has ridden since he was a three-year-old.

A fall when a horse she was competing dropped dead during a prize-giving ceremony left her with a broken collarbone, “but it’s all good now!”, she said. “It took a little time to come back and it wasn’t so easy mentally, but we are back now and I’m happy again”, she explained. 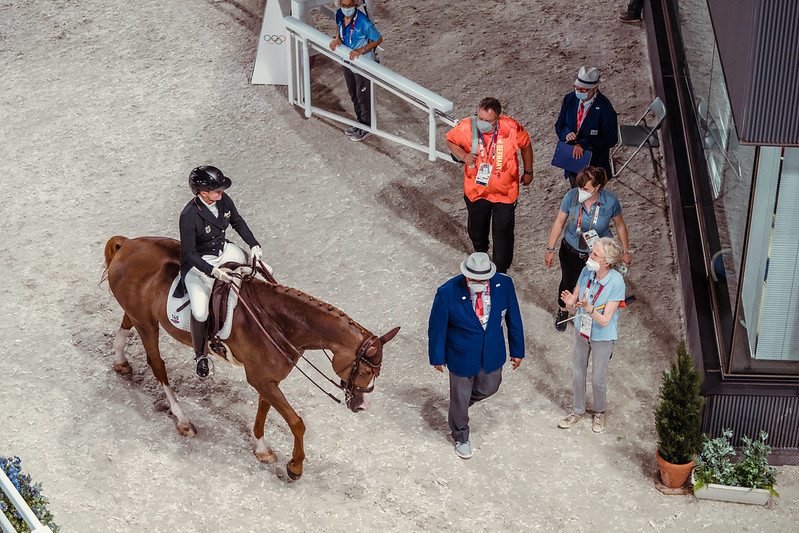 Compatriot Werth headed up the final group of 10 horse-and-athlete combinations and, last to go tonight, underpinned the solidity of the German challenge. With her beloved Bella Rose who scored 82.500 she pinned Great Britain’s Charlotte Dujardin and the charming little chestnut gelding Gio into second place in that group.

However both of these ladies look to have a lot more in store for the coming days. And Dujardin, whose reign of supremacy with the great Valegro changed a lot about the sport of Dressage in recent years, is clearly super-excited about her latest rising star. You could feel that rivalry between herself and the evergreen queen, Werth, filling the air once again tonight. 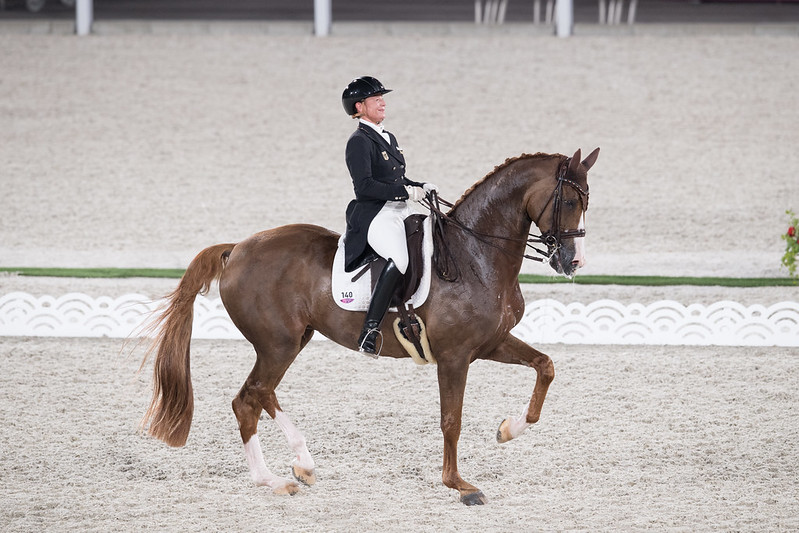 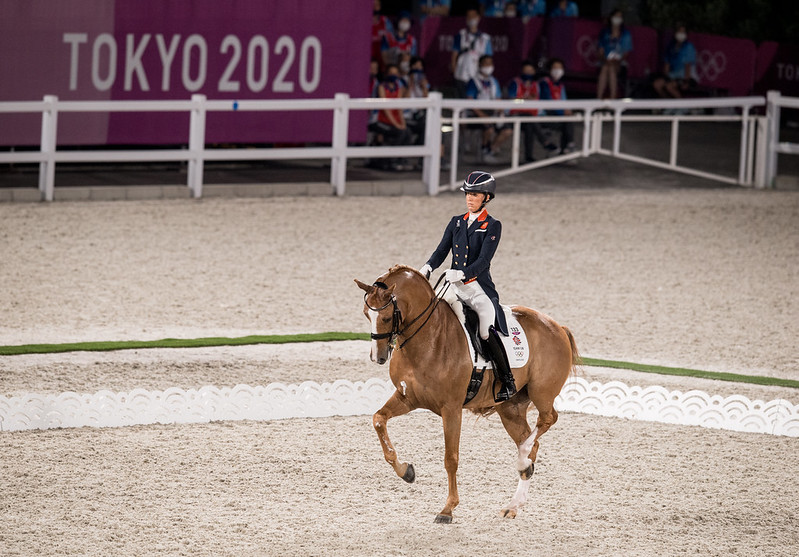 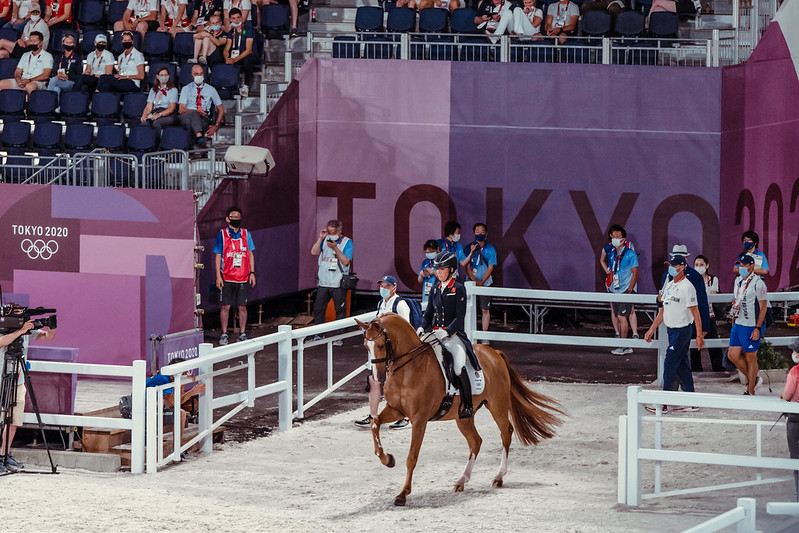 Talking about Gio, Dujardin said, “I was so happy, he’s a very green inexperienced horse, so it was a bit of the unknown what to expect. Hagen (Germany in April this year) is the biggest show he’s done and he delivered there. I couldn’t ask for any more today, he went in there and he tried his heart out. He’s just unbelievable, he keeps giving. I felt emotional on the last centreline because when you have a ride like that, win or lose that’s what it’s all about for me.

“He’s like a little powerhouse, he’s small but definitely mighty, for where he is at his training I know he can give even more and I’m so happy with him”, she said. 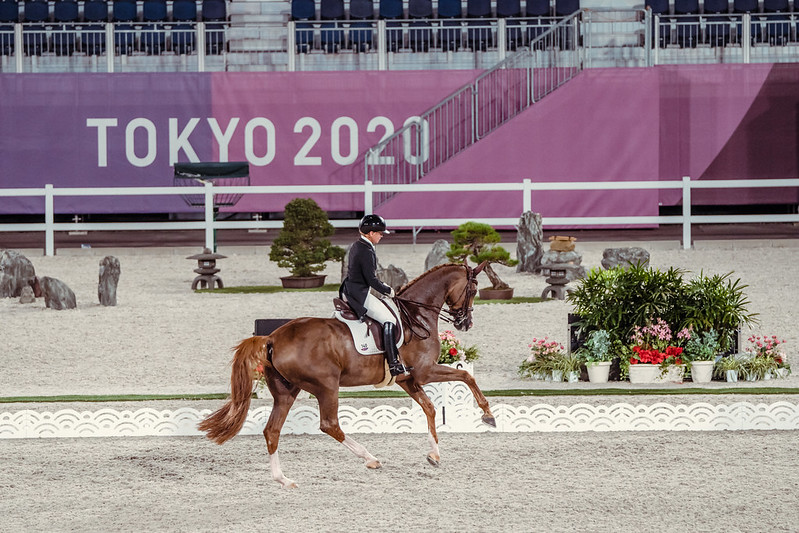 Werth clearly enjoys the renewed rivalry with her British counterpart because it feeds her competitive edge. “It’s always very important that you have strong field of competitors because then you push each other to top performances and that’s the spirit of competition”, she pointed out.

She described the 17-year-old Bella Rose as “my dream horse and when she’s in top shape she is the best – her way of moving, her character, her charisma, her piaffe/passage down the centreline – of course Weihe (her other mare Weihegold) is super and the younger ones too, but with Bella you have the feeling there is always something more possible!”

Talking about these “Games like no other” in Tokyo, the multiple Olympic champion said the lack of an audience could be influential. “Mostly you will see it in the medal decisions, especially in the Freestyle. There will be music but no crowd to carry the horses and riders — it makes a big difference — but on the other hand we are so happy that we can be here, can compete that we have an Olympic Games. We are in a discipline that is really depending on Games, because then we are more in the focus of the media and the world and it gives the younger riders at home the motivation and support so it’s a big package we have, and we are very thankful to be here”.

On the second day of FEI Grand Prix competition at Equestrian Park in Tokyo, the U.S. Dressage Team saw its final two pairs help to secure a team start in the FEI Grand Prix Special for Team Medals set to take place on Tuesday, July 27. Adrienne Lyle (Wellington, Fla.) and Salvino were the first team combination to contest the second day of competition in Group D, with the duo earning a 74.876 percent and qualifying for the FEI Grand Prix Freestyle for Individual Medals. Steffen Peters (San Diego, Calif.) and Suppenkasper rounded out the evening, going second-to-last in Group F, and earning a score of 76.196 percent. The team qualified in fourth place overall with 7389.5. total points.

Lyle has had the ride on the impressive 14-year-old Hanoverian stallion owned by Betsy Juliano LLC for nearly six years and the strength of their partnership was on display during their test. With experience as an individual from the London 2012 Olympic Games, Lyle was reflective on her experience in Toyko and the importance of the team environment.

“He has some great talent in the piaffe and passage and unfortunately we had some tension and balance issues got in the way of showing off what he’s really capable of today. I know there’s so much more in there,” commented Lyle. “This is my second Olympics, but everything is a little bit different with COVID, and the format is completely different, so in a lot of ways it’s all very new. We have a wonderful team and everyone is so supportive. We train so hard for this and to get to be here and to think about everyone who starts on this journey and being one of three selected to represent this country is awesome. This whole experience has been wonderful.” 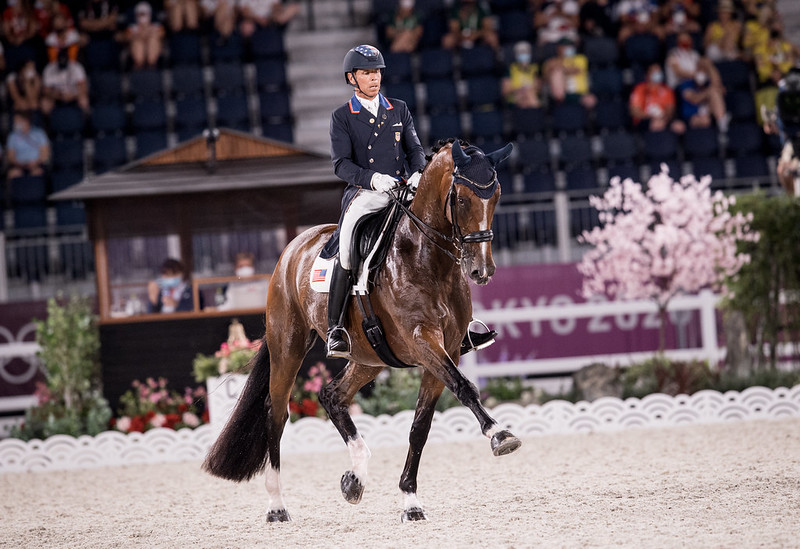 As the team’s Olympic veteran, Peters brought his experience and composure forward to his FEI Grand Prix test with Suppenkasper, a 13-year-old KWPN gelding owned by Four Winds Farm and Akiko Yamazaki. Starting in his fifth Olympic Games, Peters understood the need to give the team a strong performance to secure their team start on Tuesday in a competitive field and delivered with a clean and conservative test.

“It was a good test. It was a bit conservative because we had some trouble spots with the flying changes in the warm-up, so I rode those really carefully, but the rest I rode very forward. We had a super relaxed walk tour, which for Mopsie in an arena like this, to be that relaxed is a wonderful feeling,” said Peters. “I think today I really wanted to go for a clean test and get a decent score, which we did. With a 76 percent, I think that puts us in a really good place going into the Special.”

“It was really important that we put in two solid tests today in order to qualify us for the Grand Prix Special on Tuesday, and after Sabine’s great ride yesterday, Adrienne and Steffen made sure we got the scores we needed to get there,” commented McDonald. “We’ll start with a clean slate in terms of scoring on Tuesday and will begin preparing for what is going to be a very intense competition for team medals.” 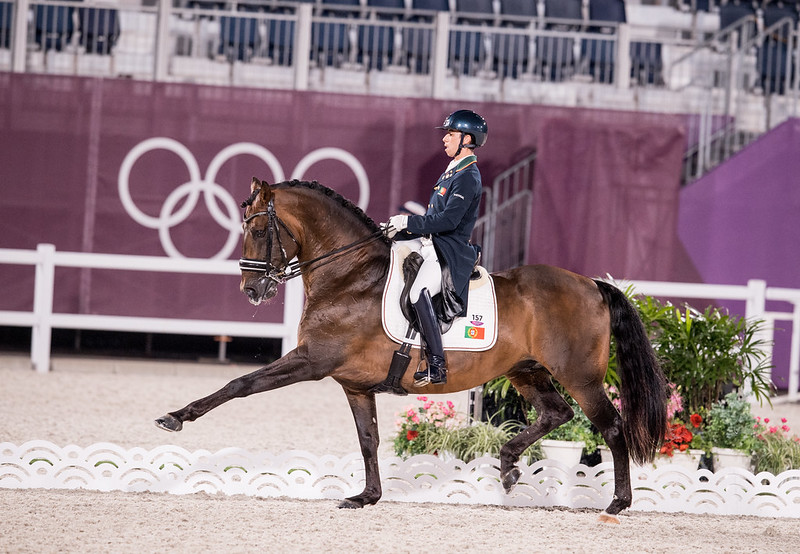 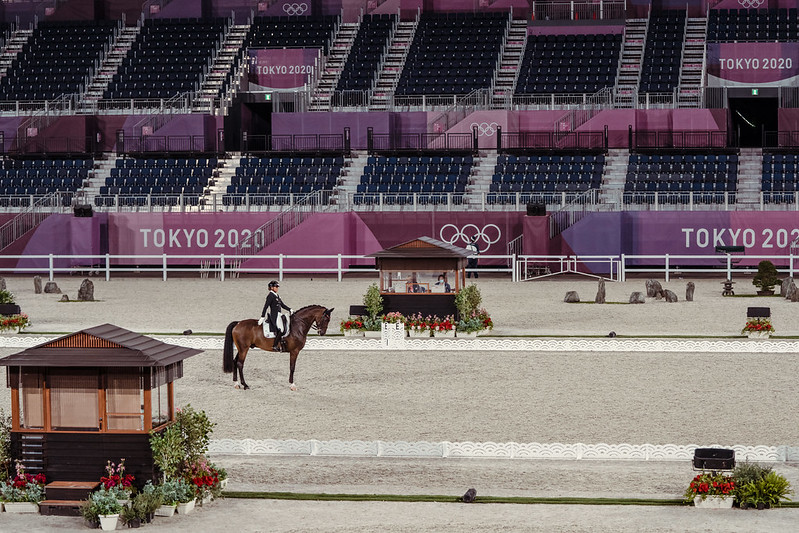 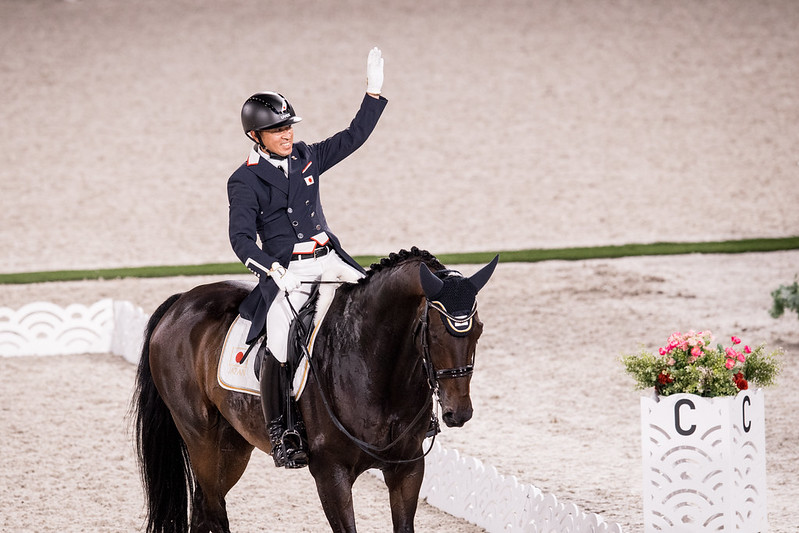 Christian Schumach (AUT) who scored 70.900 with Te Quiero SF: “I’m super happy with my horse and super happy with my riding. Overall there was one mistake in the twos and that was clearly my mistake, I was enjoying the surroundings and the Olympic experience too much so it wasn’t his fault, he did a super job! he’s really young (10 years old) and this was only his seventh Grand Prix.”

Heike Holstein (IRL): “It’s special when you breed a foal that you know from when it is running around in your fields as a baby, breaking it, competing it and taking it all the way to the Olympic Games!”

Steffen Peters (USA), talking about his ride on Suppenkasper: “He’s a hot horse so to do a relaxed clean test was a very good start. This was not the test to go crazy in, we’ll do that in the Special! It’s been four years of a complete love affair with him, he’s such a big, kind teddy bear. He’s 18.2 hands tall but there’s not a mean bone in his body, he always tries and I’m one of the fortunate riders who gets to ride him!”

He complimented the judges on the scores they gave his team-mate Sabine Schut-Kery yesterday whose pathfinding ride got the US off to a great start.

“Sabine is a cool, calm competitor with a helluva horse. Not too many people know her that well but I appreciate that some of the judges who had never seen her before gave her a very good score”.