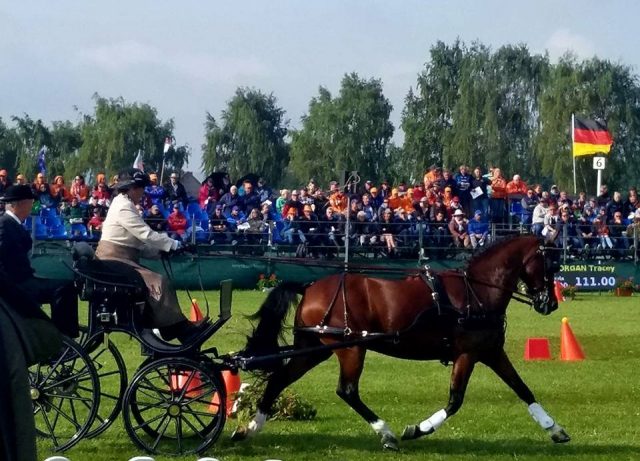 The single pony division produced only seven clear around from 40 competitors. Over half the division had completed the course before anyone achieved that result and the first driver to do so was the USA’s own Tracey Morgan and Fuego 88. Stylish and fast Tracey and “Rooster” finished the competition with a final score of 169.79. Her double clear around moved her up five places to 16th. The championship was won by Marlena Brenner of Germany with Leonardo 460.

Double clears in pair ponies were even scarcer, with only two drivers achieving that result. US driver Katie Whaley came into the phase in the hunt for a medal. The balls stayed up, but 7.52 time penalties dropped Katie from 6th to 9th place. Tara Wilkinson of Great Britain took home the gold. Tara works for and is coached by the current number one four in hand driver Boyd Excell of Australia.

The top four in hand medal was awarded to Michael Bügener of Germany. Only Marijke Hammink of the Netherlands scored a double clear on the cones course.

For complete results go to www.hoefnet.nl