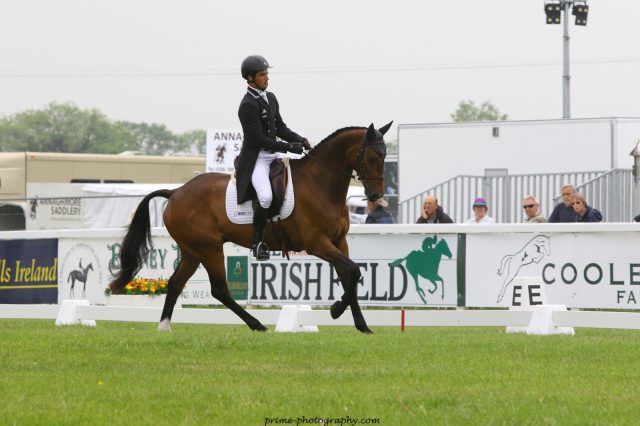 EquiRatings confirmed that the top three riders in the George Mernagh Memorial CIC3* all delivered career personal best scores at Tattersalls International Horse Trials & Country Fair to give us another exciting day of dressage action in Co Meath, Ireland.

James Avery leads the way for New Zealand on 20.8 with Zazu, a 10-year-old Holsteiner (Canto X Larky, by Parco) owned by Alexander Giannamore. This horse has won twice at two-star level and is new to the three-star level, having just stepped up this year.

Tiana Coudray and Under The Clocks, the sole U.S. representatives in the CIC3* at Tattersalls, scored 33.7 for 18th place. “Ninja,” a 16-year-old Thoroughbred (Woodborough X Regal Kate) owned by Jatial Ltd., is a stalwart campaigner, having completed four four-stars with Murray Lamperd before coming to Tiana in 2016.

“He did some spectacular work in warm-up, and I was thinking this might be one of the best tests of his life, Tiana said, “but as soon as he heard the cross country announcer he was ready to go! He held it together in the ring, but every movement he had to take a look out at cross country. He still produced some really nice work.”

In their two runs together at CIC3* level, Tiana and Ninja made the time at both Bramham and Barbury last year. After sustaining an injury at Blenheim, Ninja is back out and fighting fit, but Tiana said she isn’t sure as to whether she will put the pedal down on cross country come Sunday.

“He seems in good form, but he is an old boy who has a lot of miles on the clock,” she said. “There’s no doubt if I decide to go fast he will go fast!”

Tiana has two other horses competing at Tattersalls. Cancaras Girl, an 8-year-old Holsteiner mare (Cancara X Rubina VI, by Narew) she owns with Diana Chappell, did her dressage test today in the Eventing Ireland CCI2*, scoring 34.0 for 25th place.

“In dressage she’s really green and she’s still developing the muscles, but I really believe in her that it will come,” Tiana said. “She was a lot more confident in the ring today. She had a lot of composure and did some beautiful work.” 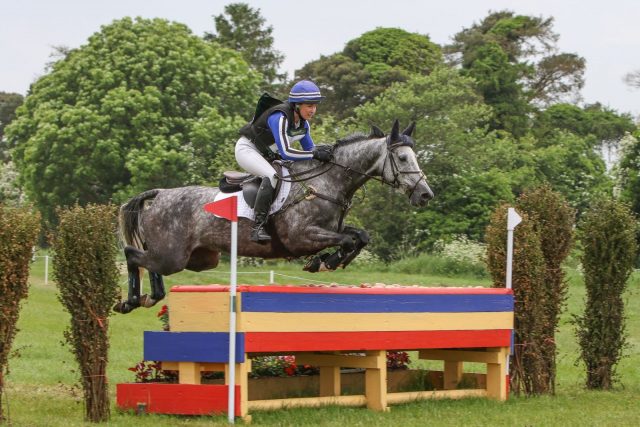 Tiana Coudray and Happenstance in the Cooley Farm CCIYH1*. Photo by Radka Preislerova/Tattersalls.

Tiana is especially excited about Happenstance, a 6-year-old Irish Sport Horse mare by Quality Time, who is competing in her first one-star in the Cooley Farm CCIYH1*. The mare, owned by Tiana’s super groom Annabelle James and Kyrle Arscott, jumped a cracking clear inside the time on cross country today to move up to 14th in a field of more than 60 horses.

“She’s a seriously nice mare and only just barely qualified to be here,” Tiana said. “That is the toughest one-star I’ve ever seen. It was big and bold and asked a lot of questions. She was a bit green to be going out there, but she’s so honest. I think it will have brought her on hugely.”

The mare, affectionately known as “The Prawn,” has a special story. Annabelle bought her sight unseen off a video in memory of her dear friend and fellow super groom Karen Hughes, who sadly lost her battle with cancer in 2016.

“Annabelle had been saving up to buy a car, but when Karen passed away, she thought, ‘Life is short,’ and decided to buy the horse instead,” Tiana said. “When she arrived off the transporter, she was the scrawniest little thing. Annabelle called her ‘scrawny and prawny,’ and we’ve called her The Prawn ever since.” 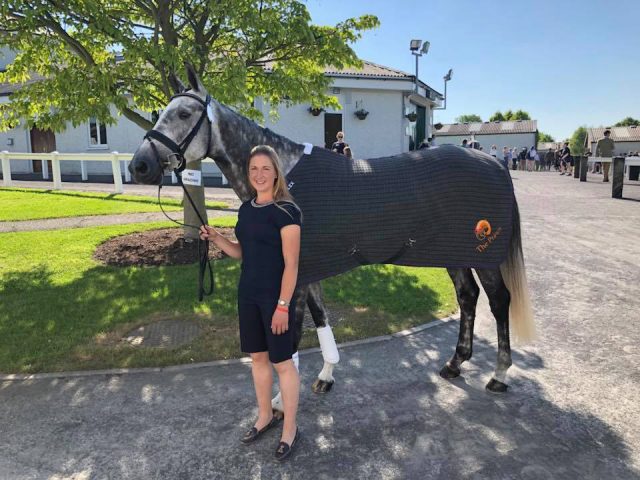 Tiana said the entire team are absolutely over the moon with how well the mare handled Ian Stark’s beefy CCI1* cross country track today. “After cross country, Annabelle said how much Karen would have loved today. It was very special.”

We have another full day of action ahead tomorrow at Tattersalls, with cross country running for the CCI2* and CCI3* divisions and CIC3* show jumping running late in the day. Click here for a full schedule of events at Tattersalls.

You can watch all of tomorrow’s cross country action, plus CIC3* show jumping, live thanks to the free live stream from Tattersalls. Tomorrow’s broadcast schedule is as follows:

Saturday cross country ride times for our U.S. contingent are: