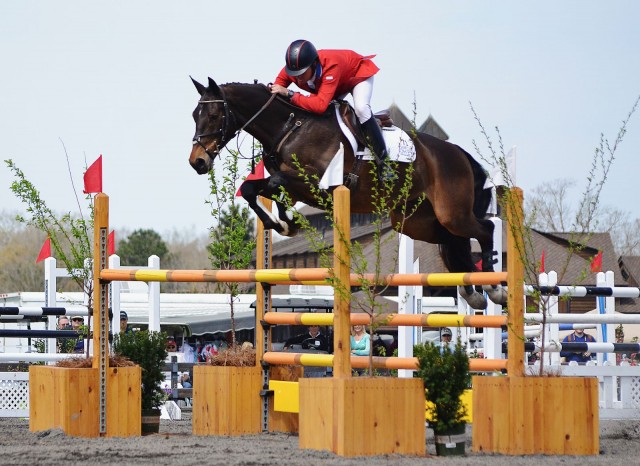 Will Faudree said Pawlow came into the show jumping feeling like his old self today, and the double clear trip around Chris Barnard’s track gave him the overnight lead heading into cross country tomorrow. “Right from the first jump, he cantered down to it, and even though I got there a little off, Ernie jumped over the top of the standards,” Will said. The only rail he touched was at the oxer following the triple combination, where Will said he took the inside turn on all three of horse horses. “I just started to turn too much in the air, and he just touched it,” Will said. “I heard it, and luck was on my side.”

Chris Barnard’s track produced a number of clear rounds in the three-star — with about half the division leaving all the poles in the cups — but that didn’t make it any less challenging. “I always find his courses very interesting because a lot of the jumps are past the apex of the turn, so it changes your approach,” Will said. “You have to keep riding all the way through the turns so that you have them straight so they can plant both legs before they leave the ground.”

The good show jumping trip has to be reassuring heading into Ernie’s first Advanced cross-country run since Aachen. The horse had colic surgery in October, which meant missing quite a bit of time as he recovered, and he only just started jumping again in February. “I credit how quickly he came back to his ab strength and all the dressage we’ve done over the years,” Will said. He also used a laser on his stomach after the staples came out, and Will said Ernie never showed any signs of discomfort as he came back into work.

Allison Springer and Arthur moved into second place after also producing a double clear in the show jumping. After having the horse for 10 years, Allison said his frame and what he can hold in the movements is a bit more advanced than many event horses, but that doesn’t mean there isn’t room for improvement. “There were three or four movements I got 4s on,” Allison said. “It wasn’t as accurate as I would have liked. But that said, there was a lot that was very, very good. The quality of the trot work was much better than at Southern Pines. And he was much better behaved than Southern Pines.”

Arthur is fit and looking forward to Kentucky, and Allison is thrilled to have him back after a lengthy period of time off following Burghley. “It’s been such a wonderful year,” Allison said. “He’s my old friend; I call him my handsome prince. It’s felt so good to be competing him again.” Allison thinks the year off and not having the stress of competing and traveling has helped him look the best he ever has through his body, and she knows Arthur is happy to be back to running again too. “I think he missed it a lot,” Allison said. “He loves being out at that main arena and looking toward the cross country. He hasn’t been here in two years, but he knows what’s out there.”

Allison said she and several other riders requested the angled brush following the new mound complex be shaved down, and Tremaine Cooper was happy to comply. “This event has to be the hardest event of the year to design for because you have to send horses to Rolex or Badminton,” Allison said. While you don’t want an easy run at your final prep before Rolex, you also don’t want to come out feeling like you need to work on a ton of things, which is how last year’s coffin complex left some riders, Allison said. She’ll be taking her own advice tomorrow: “You have to be a bit smart about the run you give them here.”

Hannah Sue Burnett also moved up one spot today with her double clear trip, and she said she’s thrilled with where William is heading into his first four-star at Rolex. “Red Hills was a bit of a downer with a little technical communication issue there with the corners,” Hannah said. “But he feels great. I was really happy with his dressage. I think that’s the best I’ve done aside from a couple mistakes there at the very end. I could go for it, and he was really rideable. It’s nice to have a horse that I can ride in the ring like I would ride at home.”