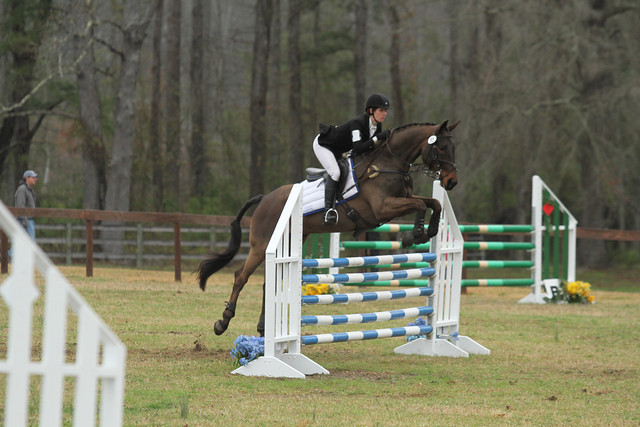 Used with permission from HoofClix.com.

I have always liked Friday the 13ths. As a child, I decided to make many things with unfortunate reputations positive in my mind. Shortly after, 13 became one of my favorite numbers (alongside nine).

Friday the 13th did not bring me bad luck, black cats or other suspicious activity. It was a day of awareness, recognition and acceptance. This Friday the 13th was the day I recognized the importance of trust within a partnership.

When you have started a horse, and been in the tack as they progress through their training, it is easy to reinforce patterns and lose sight of when the roles must be allowed to evolve. There comes a point when we as riders must recognize (and have faith) that we have done our job as trainers to the horse and allow the horse to become a partner with an even share in the relationship. At Pine Top, Garth told me he was ready and showed me how I was hindering not just his progression, but our progression as a team.

I give kudos to the dressage judge. She nailed me — 5.5 on the collective mark for rider position and aids due to tension. I have never received a score that low. Ever. Well done, judge. I deserved it. By thinking I need to hold Garth together, I create tension. Garth is ready to hold himself together, and he is more then capable through his strength, balance and training. I must break the pattern of what I know and allow new change to evolve into our new strength.

We had one of our finest show jumping rounds. I rode with “active passivity” (code for “do something without getting in the way”), and although it was not perfect, it was a great improvement. My greatest disappointment was when I did not control his shoulders to the last fence, and he slipped to the left. Though we still jumped double clear, I could have avoided that mistake through more tactful riding.

Our cross country ride was the most telling. We galloped around that course confident, capable and ready for more. But, it could have been better. Garth is at a point where he can think for himself, and I need to trust his abilities. His gallop has developed beautifully, and our communication is super. To some fences, I was over-riding him to the distance, and he does not need to be “placed” to the jumps.

Moving forward, I will trust his stride and ride his stride to the fence — not ride the distance and lose the stride. Without doubt, I am certain there will be times we will compensate for one another. I am sure I will need to hold him together or place him to a fence. I also know there will be times Garth offers his fifth leg or compensates for my tension.

Every ride is a step forward, and recognizing that we are at this crossroad is very exciting! The most difficult task for me is to recognize the habits before they are put into action. Old habits die hard.

Thank you for riding alongside us!