In this excerpt from her book Horse Brain, Human Brain, brain scientist and horsewoman Janet Jones explains the difference between what you see on course and what your horse sees. 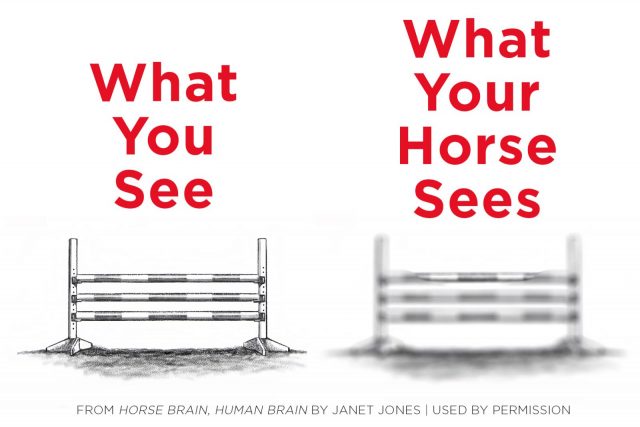 Horses often give the impression of superb eyesight. Walking in an open field, a bird flicks a wing and they’ll raise their heads, point their ears, quiver their nostrils, and widen their eyes with what seems to be intense focus on the bird’s location. Some trainers refer to this as the look of an eagle, and it is indeed an impressive display of intelligence and sensitivity.

However, the reason for it depends less on good vision than bad vision. Horses try to improve blurry views by raising their heads and enlarging their eyes. Their ears perk up to listen because they can’t see stationary details well. Their nostrils expand to optimize an excellent sense of smell.

Equine eyes are eight times larger than human eyes, larger than those of any other land mammal. But a horse’s acuity is considerably worse than ours. Acuity refers to the ability to make tiny discriminations in detail while focusing on something in the center of the visual field. Reading is a great example for humans—right now, your eyes are picking up tiny differences in the black marks on a page. You can see the difference between an “e” and a “c,” for example. The distinction is meaningful—witness the confusion if you misread that you have “cars” on both sides of your head.

Let’s consider the visually gifted (20/30) horse first. Details you can see from 30 feet away, a sharp-eyed horse can only see from 20 feet away. In other words, he has to be 50 percent closer to see the same details—he has half your acuity. What if your sweetie-pie is near the low end of normal equine acuity at 20/60? Details you make out from 60 feet away, he cannot see until approaching within 20 feet. That’s a 200 percent impairment compared to human vision!

Even the 50 percent deficiency is enough for any rider to consider. Imagine what a horse sees when the two of you approach a jump. For you, it’s clear, sharp, and bright. You’d be mighty nervous if it looked fuzzy and faded. But equestrians are often startled to see photographs constructed to show what a jump looks like to a horse. Even in sunshine, the horse’s view of a jump is blurry, hazy, dim, flat, vague—all the adjectives you’d rather not deliberate as you’re galloping 30 feet per second to a big oxer that could break your neck.

Beyond the normal range from 20/30 to 20/60, horses differ in individual acuity just as people do. Twenty-three percent of horses are nearsighted (they do not see details clearly until they get much closer than equine normal to an object). Forty- three percent of horses are far-sighted (able to see more clearly only as they get farther away). It stands to reason that slightly far-sighted horses excel in disciplines like jumping because the ability to drill down on fine points from a distance fuels their athleticism.

Acuity for objects close to us worsens with age because the natural lens inside human and equine eyes hardens over time. If you’re over 50, you know what I’m talking about. The best acuity in horses occurs around age seven. Prior to that it’s not fully developed, and afterward it begins to decay. Breed makes a difference, too. Horses with long convex faces, like Standardbreds and Thoroughbreds, have better acuity than horses with short concave faces, like Arabians. 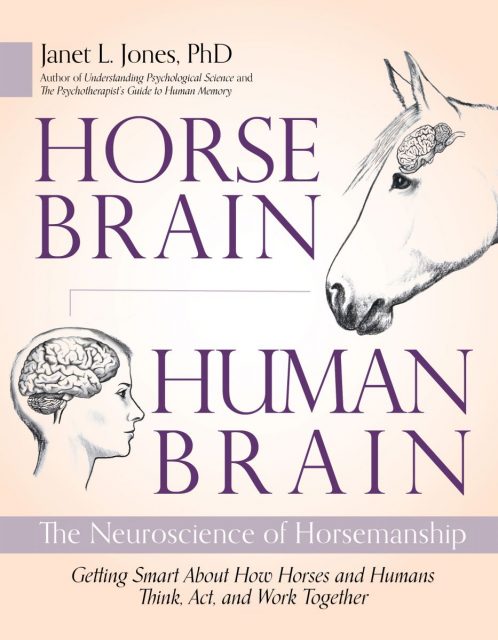 This excerpt from Horse Brain, Human Brain by Janet Jones is reprinted with permission from Trafalgar Square Books (www.HorseandRiderBooks.com).