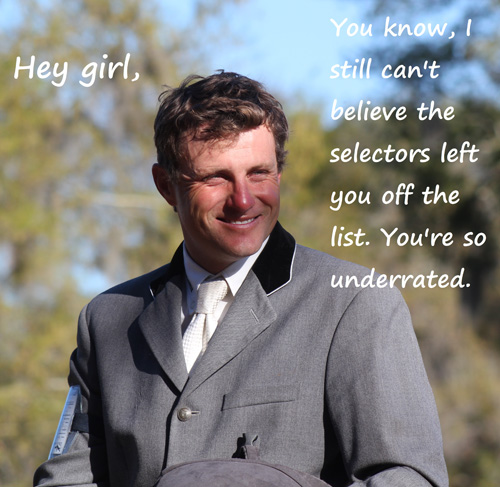 One more reason to attend Rolex: New Vocations is hosting a Symposium of Thoroughbreds in Second Careers on Saturday post-Rolex cross-country. It’s “an evening of education and fellowship for people who favor off-the-track Thoroughbreds combined with an invitation for equestrians to shop in Kentucky for the Thoroughbred of the dreams.” Highlights will include:
-Bruce Davidson, Sr., Dorothy Crowell and Cathy Weischoff evaluating the potential of recently retired racehorses available for adoption
-A demonstration led by Hall of Fame jockey Chris McCarron of how racehorses are ridden
-And, a special appearance by 1994 World Equestrian Games silver medalist and 1998 top-placed American at Rolex, Molokai, a Kentucky-bred racehorse
Basically, if you dig OTTBs, you gotta be there. The event will be held at West Wind Farm, about 15 miles from the Kentucky Horse Park. [US Eventing]

Greenwich Park is exempt from a garden hosing ban that will go into effect in London on April 5. You may recall that during last year, the test event was criticized by the FEI’s footing consultant for “running out of water.” Not gonna happen this time around–a piped supply has been secured rather than last year’s tactic of trucking water in.
The four-mile Olympic cross-country track at Greenwich has also been watered nearly daily for the past two years, and many hundreds of thousands of gallons will be at the ready to prepare the artificial dressage and show jumping surfaces in the Greenwich equestrian arena. Non-potable water from a water recycling plant supplies 40 percent of the park’s needs. The ban in is response to a drought stemming from extraordinarily low rainfall levels over the past two years. [Telegraph]

Thanks to an extended title sponsorship from Fidelity Worldwide Investments, Blenheim Palace International Horse Trials will be looking at some improvements for this year’s running of the event (Sept. 6-9).
The organizers intend to re-invest in some new fences, improve the going and introduce other enhancements.
[Bleinheim News]

Archaeologists have discovered the world’s earliest known metal bit. They found the bit, which was probably used on a donkey, in an equid burial site at Tel-Haror. It features round plates at either end fitted with triangular spikes that pressured the lips if the reins were pulled from one direction. The bit has been dated to between 1750 BC and 1650 BC, known as the Middle Bronze IIB Period. [Horse Talk]

Today on Horse Nation: Learn how to take your horse’s mugshot like a pro

Found on Facebook: The United States Pony Club’s FB page today teased an announcement that the producers who brought us quality programming like Sing Off and Cheerleader Nation are seeking teenage equestrians for a new reality show. Their casting call requires “outgoing, competitive, fun-loving girls” between the ages of 15 and 19 for a “docu-reality series that focuses on the highly hectic yet rewarding lives of high school girls who compete in rodeo and/or dressage.” Rodeo and/or dressage! This show is going to be a winner, I can already tell. USPC will be posting a flier today with full details.

Best of the Blogs: In her blog “Shoes, shoes, shoes… and horses,” Holly Ratcliff explains why Peyton Manning could be an eventer. Surprisingly, she fails to mention the fact that we already know his bum looks AMAZING in tight, white britches. Come’on, Holly. You’re a Tennessee girl. You mention his dedication, his resilience, his integrity, his grace… but not his bum?

Top of the Tweets: Hamish Cargill @hamishcargill — Monday AM, the harsh light of an office: self-consciousness strikes as you notice your hands carry the ingrained dirt of a w’end with horses.

You might recognize a few familiar faces in this one…