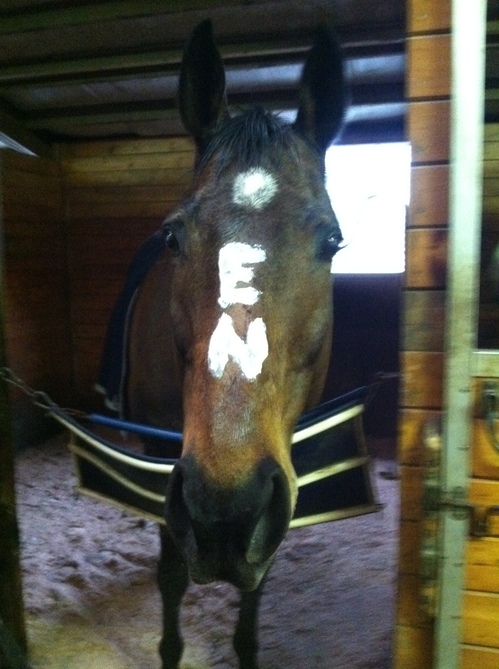 A Fantastic Contribution from ChloÃ© Monnot! Teddy Loves his Eventing Nation!
Good morning, EN Readers! We’re at the very threshold of February, which means two things:  Valentine’s Day is coming, and (more importantly) we draw ever nearer to such exciting comeptitions as the Rolex Kentucky Three Day and The 2012 London Olympics!!
But let’s not get ahead of ourselves, right? Right now it’s time for some truly fabulous Tuesday Morning Links!
Molly Rosin and Havarah Equestrian catch us up on their seasonal move to Aiken, SC. Apparently they are getting their money’s worth out on the trails in Hitchcock Woods! Molly is enjoying the relaxed atmosphere and looking forward to upcoming competitions! [Havarah Equestrian]
Doug Payne was asked to write a blog series about his time leading up to the Rolex Kentucky Three Day, and the first part just went live! Doug fills us in on the progress of some of his jumpers, talks about his history both inside and outside the horse world, and gives us a little insight into his mount, Running Order. [Rolex Kentucky]
Bruce Springsteen fans will be excited to hear that the rockstar donated multiple items to a benefit auction, raising $550,000.00 USD for the US Equestrian Team! Springsteen made a surprise appearance at the “An English Country Evening” benefit, where he initially donated four VIP concert tickets to any concert in the states. As the night progressed, he increased that offer to Twenty Tickets, as well as signed Fender guitars and a personal backstage tour! Wow! [Horsetalk]
Eventer Tina Cook will be taking part in the St Patrick’s Derby at the Cheltenham Festival on Thursday, March 15th. She is one of twelve riders competing in the charity derby to support cancer research, a topic that she has personal interest in after losing her father to cancer last year. The article bears a link where you can donate to Tina’s sponsorship for this competition! [Horse and Hound]
Equestrian Sports New Zealand has completed their selection review of the horse and rider combinations selected for the New Zealand Eventing High Performance Programme. The 2012 squad includes multiple contributions from Mark Todd, Jonathan Paget, and Andrew Nicholson. [Uptown Eventing]
Lucinda Green was recently spotted teaching lessons to young Central District eventers in rural Tangimoana. While she typically teaches only in major areas, the instance appears to have been an exciting break from the norm, as a couple riders received the lesson of their dreams! [Manawatu Standard]
The Chronicle of the Horse is featuring a new helpful series entitled “Insurance Gobbledygook: Demystifying the Terms of Insurance.” The first installment tackles the topic of “Care, Custody, and Control,” how such coverage can protect barns and trainers from possible lawsuits for incidents occurring while a horse is under their care. It’s a great piece that may assist readers on determining if obtaining this level of coverage is for them. [Chronicle of the Horse]
William Fox-Pitt gives his perspective on the teams to beat for the upcoming 2012 Olympics. While he acknowledges that the German team is the “biggest threat,” Pitt also has his eye on the competitive New Zealand and French teams. He discusses his plans his three top horses, one of which will potentially be his mount for the Olympics. Pitt isn’t yet sure if he’ll run any of them in three-day events prior to the Olympics, but he says that these things “often work themselves out.” [Sporting Life]
In Blogging News: I think we can all commiserate with PonyEventer’s latest blog entry, bemoaning the change of attitude in her mount, Farrah. Their cross country phase has gone from a pleasent and balanced experience to the equivalent of riding an “arm pulling freight train!” We feel your pain! [PonyEventer.blogspot.com]
And because I can’t stand the cute factor, I have to draw attention to Doug Payne’s video of Running Order and his dog Bacon poking at each other. They’re such little twinkies in their Newmarket Blankets!
Go Eventing!